There’s something I don’t like about the ‘Golden Rule,’ the admonition to do unto others as you would have others do unto you.

Consider this passage from the ancient Chinese philosopher Mengzi (Mencius):

One thing I like about the passage is that it assumes love and reverence for one’s family as a given, rather than as a special achievement. It portrays moral development simply as a matter of extending that natural love and reverence more widely.

In another passage, Mengzi notes the kindness that the vicious tyrant King Xuan exhibits in saving a frightened ox from slaughter, and he urges the king to extend similar kindness to the people of his kingdom. Such extension, Mengzi says, is a matter of ‘weighing’ things correctly — a matter of treating similar things similarly, and not overvaluing what merely happens to be nearby. If you have pity for an innocent ox being led to slaughter, you ought to have similar pity for the innocent people dying in your streets and on your battlefields, despite their invisibility beyond your beautiful palace walls.

Mengzian extension starts from the assumption that you are already concerned about nearby others, and takes the challenge to be extending that concern beyond a narrow circle. The Golden Rule works differently – and so too the common advice to imagine yourself in someone else’s shoes. In contrast with Mengzian extension, Golden Rule/others’ shoes advice assumes self-interest as the starting point, and implicitly treats overcoming egoistic selfishness as the main cognitive and moral challenge.

Maybe we can model Golden Rule/others’ shoes thinking like this:

And maybe we can model Mengzian extension like this: 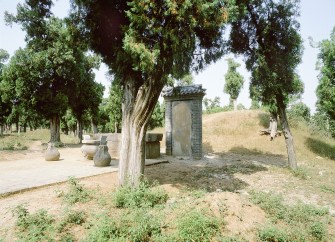 The tomb of the mother of Mengzi, one of the disciples of Confucius in the fourth century BC. (Werner Forman/Universal Images Group/Getty Images)

I like Mengzian extension better for three reasons. First, Mengzian extension is more psychologically plausible as a model of moral development. People do, naturally, have concern and compassion for others around them. Explicit exhortations aren’t needed to produce this natural concern and compassion, and these natural reactions are likely to be the main seed from which mature moral cognition grows. Our moral reactions to vivid, nearby cases become the bases for more general principles and policies. If you need to reason or analogise your way into concern even for close family members, you’re already in deep moral trouble.

Second, Mengzian extension is less ambitious – in a good way. The Golden Rule imagines a leap from self-interest to generalised good treatment of others. This might be excellent and helpful advice, perhaps especially for people who are already concerned about others and thinking about how to implement that concern. But Mengzian extension has the advantage of starting the cognitive project much nearer the target, requiring less of a leap. Self-to-other is a huge moral and ontological divide. Family-to-neighbour, neighbour-to-fellow citizen – that’s much less of a divide.

Third, you can turn Mengzian extension back on yourself, if you are one of those people who has trouble standing up for your own interests – if you’re the type of person who is excessively hard on yourself or who tends to defer a bit too much to others. You would want to stand up for your loved ones and help them flourish. Apply Mengzian extension, and offer the same kindness to yourself. If you’d want your father to be able to take a vacation, realise that you probably deserve a vacation too. If you wouldn’t want your sister to be insulted by her spouse in public, realise that you too shouldn’t have to suffer that indignity.

Although Mengzi and the 18th-century French philosopher Jean-Jacques Rousseau both endorse mottoes standardly translated as ‘human nature is good’ and have views that are similar in important ways, this is one difference between them. In both Emile (1762) and Discourse on Inequality (1755), Rousseau emphasises self-concern as the root of moral development, making pity and compassion for others secondary and derivative. He endorses the foundational importance of the Golden Rule, concluding that ‘love of men derived from love of self is the principle of human justice’.

This difference between Mengzi and Rousseau is not a general difference between East and West. Confucius, for example, endorses something like the Golden Rule in the Analects: ‘Do not impose on others what you yourself do not desire.’ Mozi and Xunzi, also writing in China in the period, imagine people acting mostly or entirely selfishly until society artificially imposes its regulations, and so they see the enforcement of rules rather than Mengzian extension as the foundation of moral development. Moral extension is thus specifically Mengzian rather than generally Chinese.

This is an edited extract from ‘A Theory of Jerks and Other Philosophical Misadventures‘ © 2019 by Eric Schwitzgebel, published by MIT Press.

This article was originally published at Aeon and has been republished under Creative Commons. Read the original article.

Tags
ancient worldChinacommunitymoralitypersonal growthphilosophy
In this article
ancient worldChinacommunitymoralitypersonal growthphilosophy
Related
The Learning Curve
5 Stoic quotes to help you through difficult times
“We suffer more often in the imagination than in reality.”
Thinking
6 great philosophers and how they used their political power
Most philosophers merely contemplate the world, but what about the ones who actually tried to change it?
Thinking
Finding your essential self: the ancient philosophy of Zhuangzi explained
Adopting a healthy scepticism towards inherited ideas means “emptying the container of the Self.”
Thinking
Why you should laugh at yourself, according to Seneca and Nietzsche
“It is more human to laugh at life than to lament it.”
13.8
Why the origin of life and the Universe itself might be forever unknowable
There might be a hard limit to our knowledge of the Universe.
Up Next
The Present
How outrage mobs silence academics — and what we can do to stop them
When the protection of academic freedom is compromised, scholarship and greater society suffer the effects.