Pop culture always translates strangely, though it appears we’ve hit peak “Idiocracy.” Earlier this month, Brad Parscale, Donald Trump’s campaign manager, compared the incumbent’s re-election campaign to the Death Star. Trump retweeted his face on Thanos’s body. In both situations, the dark lords do not triumph. Given current polls these sentiments may be prophetic, though we have to wonder what the inciters are thinking.

Why the administration would use these particular images has been debated. Some believe they’re “owning the libs” by forcing a conversation on their blatant ignorance of science fiction and comic book mythology. Thanos’s creator, Jim Starlin, was not nearly as kind in his assessment, expressing consternation over a “pompous dang fool using my creation to stroke his infantile ego.”

Starlin is not the only creator upset by the misappropriation of an archetype. On May 17, Elon Musk urged his nearly 35 million Twitter followers to “take the red pill.” Ivanka Trump giddily replied, “Taken!,” prompting Lily Wachowski, co-creator of “The Matrix,” to express anger over the usage of a term she coined.

Once a symbol enters public consciousness there’s no telling where it ends up. Nazi Germany infamously co-opted the Sanskrit term, svástika, meaning “auspicious” or “conducive to well-being,” for its genocidal program. Likewise, “redpilling” first emerged in a toxic subreddit where men try to feel better about themselves by denouncing women, liberals, and everything else failing to live up to their basement-level standards.

In the warped imaginations of members of The Red Pill, the rabbit hole referenced by Morpheus (Laurence Fishburne) in “The Matrix” is an alternative world in which women run everything while men are mere subordinates. While it appears Musk was referencing his plan to reopen Tesla’s Fremont-based factory against California state orders, his tweet’s lack of context makes the sentiment ambiguous. The same holds true for Ivanka Trump’s buy-in, a wink at Musk in his quest to rally commerce, plant workers be damned.

That’s Julian Walker’s take on this phenomenon. In a Medium article that’s been circulating—garnering a retweet from William Gibson and praise from Jason Silva—Walker recalls feeling validated by the red pill scene in the 1999 movie. Morpheus offers Neo (Keanu Reeves) an opportunity to break the bondage of mental servitude. Capped by the adrenaline-fueled screams of “Wake Up” by Rage Against the Machine, this theme inspired a wave of Gen Xers to combat the influence of Big Corporate Interests on Big Government.

As with many messages, the meaning was thwarted by none other than Big Corporate Interests, even if those interests are solar powered instead of crudely extracted. Strangely, as Walker points out, the red pill has been adopted by conspiracy theorists representing both alt-right circles and the leftist “wellness” community. Musk’s equivocation speaks truth to power to keyboard warriors intent on combating the ills of vaccines, 5G, reptilian overlords, and coronavirus hoaxes. Ambiguity is always necessary when logical thinking and the clarity of proof are absent. It is the conspiracist’s native tongue.

In his essay, Walker points out that Neo doesn’t actually awaken to the prophesied new world. In fact, quite the opposite: “The reality that Neo wakes up to is actually super-vulnerable and weak.”

Walker went further during our conversation last week. The red pill is a spiritual initiation common in mythological storytelling. Upon entering the Matrix, Neo comes into harmony and discovers an awareness of energy through the ancient discipline of martial arts. Inside of the simulation he develops the ability to flow like water, deflecting any dangers thrown at him. Walker continues, 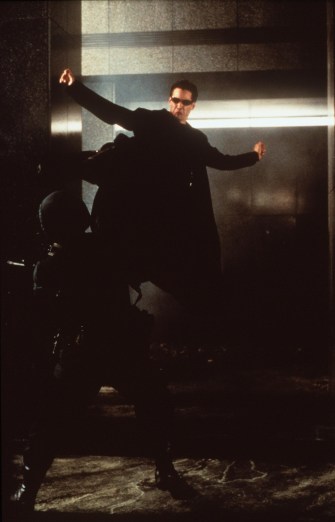 In the Bhagavad Gita, the archer Arjuna experiences an existential crisis while on the battlefield. He’s tasked to kill his friends and cousins in what he believes to be a useless war. Krishna tells him to man up. As the world’s most famous bowman, Arjuna’s duty is death. The godhead, revealing his terrible form to the stunned archer, says he creates and destroys life like a man puts on and removes clothing.

Designed to honor class and duty in Indian society, the message is clear enough: All men die, often while being churned through the mechanism of war. Arjuna draws his bow and becomes the hero—temporarily; he too dies before achieving the crown. Only his brother, Yudhisthira, reaches the door of Swarga Loka.

We cheer when Neo downloads Taekwondo, Kempo, and even Drunken Boxing, yet what Morpheus reveals is much more pedestrian—and much more powerful. As Walker writes, “The grim reality he wakes up to is sackcloth clothes on emaciated and frightened human bodies, in an industrial wasteland.”

Neo is all-powerful inside of the Matrix, much like keyboard conspiracists in the safety of subreddits. As much time as some spend there, however, it’s not reality. “The signifier of the red pill,” Walker concludes, “has the content of whatever is projected upon it in terms of the person’s perspective.” When you wall yourself off from oppositional thought—as we used to call it, debate—the red pill becomes whatever you want it to be.

We won’t shelter at home forever, though Big Tech makes it easy to shelter inside of your mind, at least until the archer comes for you. Interestingly, Arjuna didn’t reach heaven because of his pride. He murdered his cousins and friends but could never overcome himself. He was, as Morpheus warned Neo, a slave in a system much bigger than he would ever be. There is no escape, only courage. Arjuna never reconciled that fact.

Neo recognized that knowledge gained inside of the Matrix has to be brought back to the real world—a world, today, marked by the hundred-thousandth American death due to the novel coronavirus. The red pill opened his eyes to destruction and decay in society. Neo vowed to open the eyes of his peers upon his return. Strangely, he didn’t promise them more cars.

Tags
philosophypsychologyscience fictionsocial changeSocial mediatrust
In this article
philosophypsychologyscience fictionsocial changeSocial mediatrust
Related
Neuropsych
Memory and the benefits of forgetting
Forgetfulness isn’t always a “glitch” in our memories; it can be a tool to help us make sense of the present and plan for the future.
The Learning Curve
5 Stoic quotes to help you through difficult times
“We suffer more often in the imagination than in reality.”
Thinking
6 great philosophers and how they used their political power
Most philosophers merely contemplate the world, but what about the ones who actually tried to change it?
Stoicism: How to turn your sadness into strength
Chloé Valdary shares the ancient Stoic principle that can defeat modern despair.
▸
7 min
—
with
Chloé Valdary
Sponsored
Want to boost your happiness? Buy experiences, not material possessions
Some experiences continue to pay dividends time and time again.
Up Next
Starts With A Bang
No, The Universe Is Not Purely Mathematical In Nature
Mathematics is the most useful tool we have for understanding the Universe. But it doesn’t answer to anything on its own.At the frontiers of theoretical physics, many of the most popular […]