While we typically think of robots as being constructed from metal, circuitry, and plastic, a team of researchers from Tufts University in Medford, Massachusetts and the University of Vermont in Burlington, Vermont have just announced the creation of task-specific robots made of living cells scraped from frog embryos. (They are not called “ribits.”) Biologist Michael Levin tells The Guardian, “They are living, programmable organisms.”

Levin and his colleagues call the tiny automatons “xenobots,” after Xenopus laevis, the African clawed frogs from whom their cells came. They’re proofs of a larger concept the researchers have invented: a method, or “pipeline,” theoretically capable of creating living bots for all sorts of tasks.

Aside from being a somewhat shocking development, the robots raise obvious ethical and practical issues. “These are entirely new lifeforms. They have never before existed on Earth,” points out Levin. Team member Sam Kreigman says, “What’s important to me is that this is public, so we can have a discussion as a society and policymakers can decide what is the best course of action.” 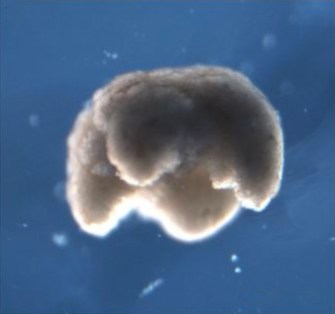 How the xenobots are made and how they work

The primary purpose of the research is the development of a workable, scalable pipeline that produces robots selected, or “programmed,” for specific capabilities. It works like this:

Computer algorithms set to work iterating 500 to 1,000 virtual 3D structures using models of actual cells — whose behaviors are known — as building blocks. For the xenobots, models of passive and contractive (heart muscle) skin cells from frog embryos were used. Upon identifying designs that function in a desired manner, the scientists then painstakingly construct a real-world version using the actual, living cells.

In the case of the xenobots, the contractive skin muscles contract and expand, like an engine. Through this action, a xenobot can move itself around on a pumping pair of stumpy legs. One xenobot has a hole in its middle that’s been formed into a pouch allowing it, theoretically, to carry a tiny payload of some sort. The xenobots can survive for about 10 days.

Since the research is really about the pipeline, the xenobots are primarily intended as a demonstration of the system’s potential. If you’re wondering why we might want living robots, you’re not alone. According to senior researcher roboticist Joshua Bongard, “It’s impossible to know what the applications will be for any new technology, so we can really only guess.”

Even so, the researchers propose a few possible applications, including eating up and digesting microplastics in the ocean, and doing the same for toxins in the human body, delivering drugs to patients, and cleaning plaque from human artery walls.

All of these assume that the system can mature into a means of creating robots capable of performing multiple interlinked tasks such as identifying and then digesting toxins. If this becomes doable, there are some obvious benefits inherent in living-cell robots: They can heal themselves if the become damaged—this has already been demonstrated with the xenobots—and they are made of eminently biodegradable materials.

Chief among the ethical concerns regarding living robots is the notion that, as living organisms, the robots may be reasonably entitled to moral status as individuals.

L. Syd M Johnson, bioethicist at SUNY Upstate Medical University tells Big Think: “As with any new technology, how it is used or will be used raises important ethical concerns. As humans, we’ve shown time and again that we are really not good at predicting the future consequences of technological innovations. But when novel living organisms are created, I have concerns about potential harms to those organisms themselves. Humans have been creating and manipulating animals for millennia with little concern for how it affects the animals themselves. Will these xenobots be more like bacteria, which are alive, but not sentient, so we need not worry about their welfare? Or will they be more like jellyfish or corals, animals about whom we might reasonably wonder what they feel? In principle, xenobots are arguably animals, and could be created using neural cells, and to have a nervous system that would make it easier to “program” them to respond to and navigate the world. Releasing them into the world, and creating them to be potentially capable of feeling are both possibilities that I find worrying.”

On a practical level, it’s worth noting that among the possible uses mentioned by the researchers is an illustration of the type of problem the robots couldn’t really solve. If they ate microplastics from the sea and then died, what would happen to their plastic-filled corpses? Wouldn’t they eventually be eaten by other ocean organisms, merely shifting the plastic to a different rung in the ecological ladder? (Removing toxins from a human body would be less of an issue—the robot could simply be eliminated through the patient’s digestive system.)

These concerns notwithstanding, the researchers remain excited by the possibilities, even beyond making living robots. “The aim is to understand the software of life,” says Levin. “If you think about birth defects, cancer, age-related diseases, all of these things could be solved if we knew how to make biological structures, to have ultimate control over growth and form.”

Tags
biomechanicsdemoEngineeringfrog cellsinnovationinventionprogrammingrobots
In this article
biomechanicsdemoEngineeringfrog cellsinnovationinventionprogrammingrobots
Related
The Present
How California could save its rain instead of letting it drain into the ocean
Why can’t more rainwater be collected for the long, dry spring and summer when it’s needed?
Hard Science
Scientists use laser beam to divert lightning strikes
Laser-guided lightning systems could someday offer much greater protection than lightning rods.
The Future
Paper-thin solar cell can turn any surface into a power source
Some solar cells are so lightweight they can sit on a soap bubble.
The Past
How electricity stormed past steam and became the power of the future
The shift from steam to electricity was inevitable — but some foresaw it earlier than others.
The Past
What made Ada Lovelace so brilliant
Ada Lovelace’s skills with language, music, and needlepoint all contributed to her pioneering work in computing.
Up Next
Starts With A Bang
Ask Ethan: Does A Time-Stopping Paradox Prevent Black Holes From Growing?
From outside a black hole, all masses take an infinite amount of time to cross the event horizon. How, then, can black holes grow?Every Milky Way-sized galaxy should contain hundreds of […]