Chalk it up to the recurring “blame the woman” sentiment one gender has endured for eons. Only this woman is fighting back.

Math teacher Lauren Miranda walked into Bellport Middle School, situated blocks from Long Island’s Bellport Bay, as she did every other January day. Only this one took a turn for the worse when a male student revealed he was in possession of a topless selfie of her.

At first, Miranda didn’t even recognize the photo. Then she realized she had sent it to a male teacher in the district she had previously been dating. So far, she is still not sure how the photo leaked.

Miranda then had to meet with her (predominantly male) superiors and colleagues, who decided to fire her from her post despite an impeccable teaching record. Instead of cowering to the demand, however, she toldInside Edition:

Then she hit the school district with a $3 million lawsuit and is demanding her job back. The focus of the lawsuit? Gender discrimination.

Should Teacher Be Fired After Students Find Topless Photo?

Should a teacher be fired after students discover a topless photo?

The firing seems ill-advised, especially considering other situations between students and teachers. Earlier this year in Arizona, sixth-grade teacher Brittany Zamora was discovered to be carrying on a relationship with a 13-year-old student. The teacher allegedly fondled the boy in class and had sex with him in front of another student. She was placed on administrative leave.

Former Miss Kentucky, Ramsey Bearse, was suspended from her position as a middle school science teacher in West Virginia after being accused of texting nude photographs to a 15-year-old former student over Snapchat last year.

There is no shortage of teacher-student relationships over the past few decades. Unsurprisingly, most media attention is devoted to female teachers and male students.

In Miranda’s case, there was no relationship or sexting. Just the machinations of our digital lives impeding on personal privacy once again.

Yet we’ve entered a new and refreshing phase in American society, one in which women like Miranda don’t back down when receiving unwarranted criticism or losing their job. Joseph Giani, the school district’s superintendent, stated that he was about to recommend Miranda for a promotion before he saw the selfie; Miranda had received the top rating in every category the previous year during an evaluation.

Giani then said that Miranda “failed to take adequate precautionary measures” for blocking students from gaining access to the three-year-old photo, and even “caused, allowed, or otherwise made it possible” for students to get a hold of it.

Outside of Miranda’s ex-boyfriend’s phone or computer being hacked, there is likely only one other explanation. Worst case scenario, it’s a plot between Miranda and her ex. Even if that were the case, however, the school board’s reaction is overblown. 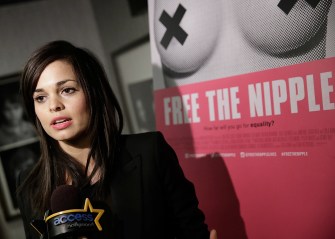 It’s time for men to grow up and reckon with female sexuality. Scroll through any fitness feed in Instagram and you’ll quickly discover thousands of dudes with their shirts off. Women have to spend extra time doctoring any “revealing” photo they want to post to ensure that their nipples are blurred or blacked out.

This entire spectacle reminds me of my first visit to France in 2000. Bus stops featured topless women; magazine stands were filled with nipples from every gender. From there, we traveled to Barcelona, where beaches do not discriminate when it comes to stripping down. None of this presentation or behavior is perceived as sexual or “dirty.” It’s simply part of the social fabric of expression.

Not in sexually repressed America, which is still waging a 400-year-long Puritanical battle against the female body. Instead of an opportunity for discussing femininity and feminism in the Long Island classroom, male administrators fell back on the expected: Ban the female. Honest conversations about sexuality and boundaries with students would provide actual teachable moments instead of the circus this has become.

It’s time to stop blaming women for men’s inability to control themselves. Freeing the nipple is only the first step into a broader and necessary discussion regarding human bodies. Until men are willing to engage in a meaningful dialogue on the subject, women will continue to be the victim of male immaturity, vitriol, and violence. That’s no way to educate anyone.

A group of prominent scientists shares how research has changed them.
The Future

Summit Public Schools take a radically different approach to education. And it’s working.
Up Next
Starts With A Bang

If you think we’ve done a great job with planet-finding so far, just wait until you learn what’s possible with microlensing!When we think about finding planets in the Universe, we […]