The flood is coming. The elders, who have lived along this riverbank for generations, tell us it’s time to move on. We’ve been living here for a long time. The water has been good, the feeding has been good, but the flood is on its way. We need to go. You travel across wilderness; you cross the valley. Your new home is raw. There’s no infrastructure, but there’s also no flood. You dig in and get to work.

“That would be was the best-case scenario.”

Jordan Hall and I are talking about the coronavirus, but really, we’re discussing America and by extension the world. There are many orders to our conversation, which makes sense given Hall’s incredible polymathic mind. The co-founder of Neurohacker Collective (and formerly Jordan Greenhall) is somewhere in “the hills of Texas,” taking time out to chat about the future, which today is both far from now and right now. We’re trying to suss out if that means, as he has written, that we’re careening toward “Mad Max” or heading into a “truly amazing future” akin to “Star Trek.” At the moment Hall is optimistic, which is good, given that he’s aware of how quickly small iterations can cause tidal waves.

When you author diametrically opposed potentialities about the future of the species, readers want context. The timing of our conversation is fortuitous; we have plenty of context in the form of COVID-19. Italy is shut down, the stock market is a confused boomerang, and for some reason my friends are asking for advice about their children or parents on Facebook—not exactly the most trusted forum for credible scientific evidence. Over the past week I’ve witnessed rants about government-created viruses, Democratic hoaxes, and oregano oil rooting out the virus like an exorcism. The collective intelligence seems to drop an IQ point every time someone logs on.

Fortunately, social media is not life, but viruses are. They long predate and will long outlast us. They’re complex, as all nature is complex. Humans, by contrast, are complicated—Hall’s terms. Sometimes, he continues, complicated animals introduce complexity through the systems they build.

“We need food. Back in the early days, we were simple biological organisms that gained footing in a complex environment. We then began the process of building things like early agriculture, which had the consequence of separating us from complexity, meaning that we could actually control our environment, which gave us for some period of time a significant increase in food—but at the cost of actually putting us in complicated systems that are themselves intrinsically fragile in the context of larger complexity.”

Systems produce unintended consequences. Pandemics begin when we first domesticate animals. Obesity is only possible when an animal accustomed to scarcity suddenly discovers excess. Twelve-thousand years ago, widespread agriculture commenced, with the eventual consequence of selecting for the highest yields, which led to monocropping. An animal primed for both scarcity (in supply) and diversity (in choice) is now being sold frozen, processed dinners. The path of least resistance wins out, consequences be damned.

Yet we’re not designed to understand thousands of years, much less millions of them. We’re also not socially built for nation-states, or nations, but tribes. Nations require complex trading systems; a global trading system will suffer consequences, like epidemics. The more integrated we become, the harder complicated systems fall.

“Speaking of the arc of history, we see our complicated systems break. Sometimes those breaks were minor and we would patch them and upgrade them; sometimes the breaks were significant, in which case the civilization would either collapse or significantly transform, and we would move forward from that point. Where we find ourselves now looks like the end of that arc.”

Every system requires design criteria. Civilizations must manage energy flows, floods, viruses and bacteria, pests, and the environmental consequences of our collective actions. Add to natural complexity anthro-complexity, the impact of our complicated systems; the tertiary layer is techno-complexity, the problem of accelerating change. A feedback loop: the better our tools, the more we impact nature. The higher the price we pay.

We discuss the global impact of the Spanish influenza epidemic, which spread despite having no social media presence. Then we pivot back to COVID-19, for which Hall contemplates three orders. First, the perception of a novel virus in Wuhan province. The Chinese government made ineffective choices, but given the nation’s political system it was able to “engage in a massive iron-clad quarantine.” The world’s cameras all pointed at that province. Some nations responded immediately: South Korea has tested over 200,000 citizens. Then you have America. 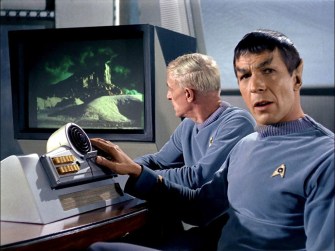 John Hoyt as Dr. Phillip Boyce and Leonard Nimoy as Commander Spock (Mr. Spock) in the STAR TREK: The Original Series episode, “The Cage.” This is the pilot episode completed early 1965, but not broadcast until October 4, 1988.

Photo by CBS via Getty Images

“Suddenly you begin to realize that a phenomenon at the first order spills over into other seemingly disconnected modes of the larger cultural milieu. It turns out that when governments are shutting down entire regions and people are choosing not to go to work, that has impact on the economy. An event that occurs in one system can very easily spill over into other systems, which by the way has feedback.”

For the third order, we peer ahead to October, making me question Coachella’s rescheduling, as if we didn’t learn anything from the Spanish influenza. (Most of the 30-50 million people died the second year.) Sometimes our optimism does more bad than good. Hall picks it up, portending the possible.

“It turns out that we’re in an economic depression and the virus has blown through our medical system and we’ve actually got 25 million people who are sick. Think about the degrading factor there. We’ve got a situation where the ability to make effective, nuanced choices at the political level is being degraded, both sociologically—people are panicking—and even practically. Many of the people who are leadership positions could themselves be sick.”

A decade ago Hall was asked to consider questions of asymmetric warfare and global terrorism. His response? Get rid of the Pentagon. Minor tweaks won’t solve an issue that requires a comprehensive systemic reboot, whether via a President Trump or President Biden. The flood is coming.

Still, Hall concludes, “Star Trek” is possible, more so than “Mad Max.” We are optimistic animals, by nature, no matter how complex or complicated. He easily transitions between theoretical models and the model playing out in front of us. That doesn’t make any of this easy. We have a lot of work ahead.

Hall compares our upcoming struggles to homesteading. We might have to fire up very old muscle memories, and soon—plowing and digging and planting. There is precedent: the Jews breaking ground in Israel; many wanted to leave given the work required. Yet they endured. Maybe, just maybe, things won’t be so complicated when we reboot.

“The ability to make meaningful change at the individual level, and at a collective level, is always premised on being in a particular disposition. Some people refer to as the liminal space, a moment of clarity. You’re an addict, you will not make changes, you will continue to take the shortest path, the easiest path, which unfortunately is the path to self-destruction. Something about reality, nature, hits you hard enough: a rock bottom event that gives you a moment of clarity. In that moment of clarity you actually can make really significant change.”

A food safety researcher explains another way to know what’s too old to eat.
Videos

The first human that isn’t an Earthling could be in our lifetime.
▸
5 min
—
with
Robert Curbeam
The Present

To reap the benefits of digital technologies, we must contend with their addictive designs.
Up Next
The Present

Winston Churchill had a secret army, and bunkers like this would have hidden them during a German invasion.