Researchers have come up with an interesting way to examine social status, proposing the following question in a 2016 study: “What happens when status isn’t known?”

“Another, perhaps more important aspect of status is certainty of social status,” says postdoctoral researcher Jessica Vandeleest. She, along with Brianne Beisner — both associate project scientists at UC Davis School of Veterinary Medicine — headed up the study to find out the effects of social uncertainty on macaque monkeys.

One of the more interesting findings of this study was the possibility that this ambiguity in status provided more observable benefits to lower-ranking macaques. Even going so far as to suggest it may help them move up the social ladder.

The researchers examined how perceived social rank and rank could predict risk factors of poor health. The researchers tested the macaques for pro-inflammatory proteins (interleukin-6 (IL-6), tumor necrosis factor-alpha (TNF-α), and C-reactive protein (CRP), which were chosen because their presence can indicate a higher risk of diseases, such as type 2 diabetes and atherosclerosis. 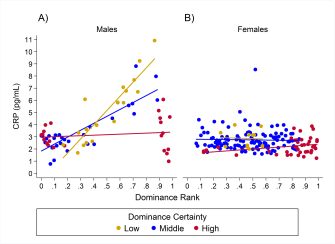 For the macaques higher up on the social ladder, a low certainty of their status showed higher markers of inflammation than those with a clear idea of their standing. Consequently, an uncertainty among high-ranking macaques will likely threaten their place within the hierarchy.

For low-ranking macaques, status uncertainty resulted in fewer cases of inflammation. What’s more, researchers suggest this social uncertainty might provide an opportunity: in their case, uncertainty could lead to gaining a higher standing within the hierarchy.

It would be interesting to know whether or not the same results could be observed in humans. Right now, of all the Americans born into low-income households, only 4% will rise to the middle-class:

Global inequality takes many forms, including who has lost the most children
Strange Maps

First drawn in 1935, Hu Line illustrates persistent demographic split – how Beijing deals with it will determine the country’s future.
Up Next
Health

Scientists Tackle Foods That Claim to ‘Keep You Fuller for Longer’

We might feel fuller, but eating foods marketed for “fullness” won’t prevent us from consuming more calories, even when we’re not hungry.