In a press release that surprised absolutely no one, a team of researchers from the University of Michigan’s School for Environment and Sustainability demonstrated that the homes of wealthy Americans have larger carbon footprints than those of lower-income Americans. Typically, they are 25 percent higher, but in some parts of the country wealthy neighborhoods can emit 15 times as nearby poorer areas.

Despite the obviousness of that point, the study also considers how the differences in the homes of the rich and poor, the layout of our cities, and the difference in energy use by state impact our ability to reach emissions targets. As it turns out, it may be more challenging to get to carbon neutrality than you’d think.

Residential energy use is behind a fifth of American greenhouse gas emissions. This is a considerable amount; if treated as a country, it would rank above Germany in terms of total greenhouse gases produced. Any route to carbon neutrality must have an idea of how to reduce this amount. Despite this, data on carbon and energy intensity per meter of housing stock in each state has been lacking.

Given the potential usefulness of this information in formulating policies, the authors of this study collected data on 93 million homes. Not only did they compile and analyze data on the energy used in residences by state, but they also looked into other understudied areas, such as how exactly energy emission differs across income groups, how building density impacts emission rates, and how end-use changes the interpretation of data on energy use.

By combining information on housing stock age, type, heating systems, and how close it was to other units with data on local income, climate, sources of electricity, the authors created a variety of maps and models to show how energy is used today and estimate how it may be used in the future. 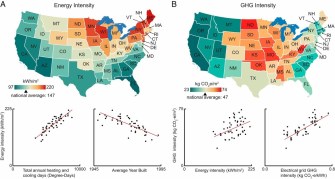 The findings are in line with previous studies suggesting that heating and cooling take the largest part of home energy use. As the map makes clear, energy usage per unit area is higher in areas with more “degree days,” which is the sum of daily average temperature deviation from 18°C (65°F). States where that sounds like a balmy day (Vermont, Maine, Wisconsin) used more energy for temperature control than states where that temperature is more typical (California, Florida, or Arizona).

The states with the highest GHG intensity are not just the ones with the highest energy intensity. This is caused by differences in the source of electricity between different parts of the national electric system. In some states, the energy supply is more fossil fuel-based than in others. This relationship is demonstrated in the line graphs in the lower right.

The second line graph on the lower left also shows the relationship between the home’s age and its average energy intensity. As you may have guessed, older homes are more energy-intensive than newer homes. While this might strike you as self-evident, we need to know and prove details like this if we want to make progress on cutting emissions and energy use. This data is especially important, given that most housing stock lasts forty years. Any new homes built to low energy efficiency standards will be around for a while. 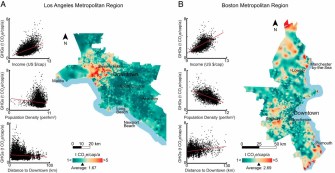 High emissions areas like Beverly Hills or Sudbury are known for their wealth; a relationship charted for both regions. More densely-packed areas have lower energy use per capita than comparatively spacious places. However, it is also clear that the old notion of wealthy suburbs far from downtown and relatively more impoverished urban areas is not as accurate as it once was, given the number of high-income regions near downtown LA.

However, these maps can’t show everything. The Boston suburbs have municipal utilities that provide low carbon power, lowering their footprints. Likewise, as higher-density areas are associated with smaller carbon footprints, the existence of high-end apartment complexes for high-income earners slightly skews the data for some downtown areas.

‘A world with no ice’: Confronting the horrors of climate change | …

The authors compiled all of this information so that members of the public, regulators, construction firms, and elected officials can make the decisions needed to lower housing-related greenhouse gas emissions. They provide several ideas on how to use this data to inform our actions going forward.

They suggest that we continue and accelerate the decarbonization of the electric grid alongside a massive retrofitting program for older homes to increase their energy efficiency. Alone, these two efforts would get the U.S. to the 2025 goals of the Paris Agreement.

There is a problem, though. If we only do those two things, we won’t reach the Paris Agreement’s long-term goals. Continued in-home fossil fuel use to heat homes, such as natural gas heating systems, will produce too much carbon. The author’s suggestions include increased use of heat pumps, solar water heaters, photovoltaics, and carbon-neutral fuels.

To keep the rate of emissions falling, the authors go beyond energy production and efficiency and consider the way American cities are built and the enormous size of the largest American homes.

They suggest reducing the typical American home’s size per capita to levels comparable to those in other Western countries. Doing so would reduce the amount of energy needed to maintain the houses, in addition to other benefits. In the same vein, they suggest increasing the density of housing in new and existing developments. In their studies of Boston and Los Angeles, denser neighborhoods tend to be at or near the emissions goals for the Paris Agreement already.

Increasing the typical housing density across the country would reduce the average home size, and likely reduce the number of single-family homes compared to other types of housing, and would substantially reduce the needed energy per household. These need not be uninterrupted blocks of apartments, as the authors are quick to point out, but could also include detached and semi-detached households built close together.

However, even the highest densities modeled by the authors are at the low end of the estimated level needed to make mass public transit viable. As the authors observe, a low-carbon community will take more than low-carbon homes. They suggest that higher densities will be needed alongside mixed-use development to reach that point. This is an important consideration, there won’t be much point to lowering our emissions from housing if we end up driving more.

Perhaps the biggest takeaway from this study is the need for a combined effort stretching across various sectors and levels of government to deal with climate-changing greenhouse gases. Focusing purely on the demand or production size of energy won’t be enough to reach our goals. A rethinking of how we build houses and communities in the United States might be necessary.

The lifestyle that many Americans are used to creates a lot of carbon as a waste product. Getting our country to environmental sustainability is going to take more than just switching over to renewable energy and clean-burning fuels. As this study shows, the very way we’ve built our housing and cities needs to be reconsidered if we want to reach our climate goals.

A “bio-battery” made from genetically engineered bacteria could store excess renewable energy and release it as needed.
Strange Maps

The site will be the first working example of a geological disposal facility.
Up Next
Starts With A Bang

Which Galaxy Looks The Most Like Our Milky Way?

The Pinwheel galaxy, Messier 101, has many features in common with our own Milky Way, but is definitely not a perfect analogy, as both its outskirts and inner core region […]