In 2005, the 109th United States Congress passed the Energy Policy Act. Like any major bill, its provisions ranged from the useful (like authorizing tax credits for alternative energy producers), the questionably effective (like extending daylight savings time for a few weeks), and the downright counterproductive (like incentivizing the use of coal as an energy source).

The act also included an exemption that fell firmly in the latter category that would later become known as the Halliburton loophole. This loophole amended the Safe Drinking Water Act — a major tool the EPA uses to keep our drinking water clean — to provide an exemption for the fluids used in hydraulic fracturing (or fracking). As a result, the EPA does not have the legal authority to regulate fracking fluids.

This exemption came to be as a result of a recommendation by the Energy Task Force, an organization formed by then-President George Bush and headed by then-Vice President Dick Cheney, former CEO of Halliburton, which coincidentally also first patented fracking and is the largest provider of fracking services in the world. Hence, the “Halliburton loophole.” 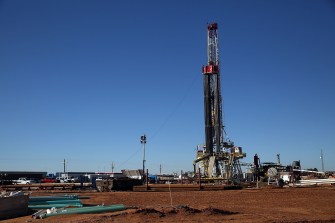 How does fracking work?

The purpose of fracking is to increase the rate at which oil and gas flows to wells, and often, it’s the only economical way of obtaining oil and gas reserves. It’s especially used in places where the gas is widely dispersed, such as in shale or tight sands.

Fracking companies drill a deep hole in the earth, up to 20,000 feet deep. Modern fracking also involves horizontal drilling, which reduces the need for multiple vertical holes since one horizontal borehole can access more material. This hole is fitted with a steel pipe full of strategically placed perforations. High-pressure fracking fluid is shot through the pipe, splitting off along the perforations and cracking the surrounding rock. These cracks expedite the flow of oil and gas to nearby wells, enabling the collection of more resources than would otherwise be possible.

The trouble is, fracking fluid is composed of some truly nasty stuff, and a single operation can use several million gallons of it. The biggest component of fracking fluid is water, at about 90 percent. Another 9.5 percent consists of sand or a similar material called a proppant, which fills the fractures and holds them open against the weight of the earth. That last 0.5 percent of material is what’s worrisome. This component is a mix of chemicals used for a variety of purposes in the fluid. It may not seem like much, but the vast quantities of fluid required for a fracking operation means that between 80 and 330 tons of chemicals are used each time. The most up-to-date review of these chemicals, conducted by the EPA between 2005 and 2013, identified 1,084 different kinds of chemicals used in fracking operations, though a single operation is likely to only use between 4 and 28.

These include arsenic, formaldehyde, mercury, and other substances that have been linked to reproductive and developmental health issues, that may cause cancer, or that have unknown effects on human health [PDF]. And, of course, fracking fluids have potential effects on wildlife as well.

The industry’s argument is that fracking fluids are handled in a safe manner, are recovered as much as possible, and are dispersed so deep underground that they couldn’t possible leach into groundwater, which is typically closer to the surface than oil and gas deposits. The evidence, however, does not back this up.

What effects has fracking had?

The last major review of fracking was conducted by the EPA in 2016. Between 2006 and 2012, the EPA collected reports on 151 separate spills from 11 states, with the amount of spilled fluid ranging from just 5 gallons to over 19,000 gallons. Not all of these were just water or the mixed fracking fluid, either: some of these spills “were often described as acids, biocides, friction reducers, crosslinkers, gels, and blended hydraulic fracturing fluid, but few specific chemicals were mentioned.”

Furthermore, 13 of these 151 spills were observed to have reached surface waters. However, the report authors warn that even spills that occurred far from a known body of water may have seeped into the ground and polluted the groundwater if they occurred on more permeable soil.

Even if the fluid is handled appropriately, it’s still ultimately being blasted into the earth. The targets of fracking are often far below groundwater resources, but faulty boreholes can leak fracking fluids into near-surface groundwater.

In any case, there is evidence that fracking fluids have polluted groundwater before: Bainbridge Township in Ohio’s drinking water became polluted with methane after a fracking operation; fracking fluids were found in the water in Killdeer, North Dakota, and 133 additional instances throughout Texas where towns’ water supply were polluted with methane. Numerous other examples of chemicals linked to fracking practices finding their way into drinking water exist.

This doesn’t even account for fracking’s impact on earthquake severity and frequency, land use, and water use. Because it’s such a potentially harmful activity, some states have independently established their own regulations, though these have been criticized as being largely ineffective. Thanks to the Halliburton loophole, there is still a significant lack of federal regulation over an activity whose known effects are deleterious and which still remains largely unquantified.

The Fracturing Responsibility and Awareness of Chemicals Act (or the FRAC Act) purports to close this loophole. Although it has been introduced in congress multiple times since 2009, it has yet to be signed into law. Until it or similar legislation is passed, we’ll have to let the fracking industry eat its cake and have it too.

“This is much deeper than just ‘let’s figure out how we can get both sides to get along.’”
▸
15 min
—
with
Ian Bremmer
Videos

There are two kinds of suffering. One is pure pain. The other makes life worth living.
▸
6 min
—
with
Paul Bloom
Up Next
The Present

‘Climate apartheid’: Report says the rich could buy out of climate change disaster

The world’s richest people could breeze through a climate disaster – for a price.