The video game industry is booming at a staggering pace. To put it in perspective:

With profits and industry growth virtually guaranteed, companies are competing to push gaming technology forward and create new types of gaming experiences. So, what are likely to be some of the biggest evolutions in video games this decade?

For video games to look realistic, they need to convincingly mimic how light behaves in the world: reflections, shadows, and changes in light after characters manipulate the environment, say, by shooting a hole through a wall. In most video games, like “Minecraft”, light is “baked into” animated scenes. It’s static. 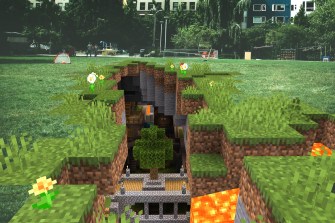 With ray-tracing, however, light behaves fluidly, changing in real time based on where your character is in the game. Ray-tracing “traces” the path of light rays in the game. The light behaves sort of like real-life photons, which are emitted from a light source, bounce off surfaces, and eventually make it to your eye. Only ray-tracing works in the opposite direction. It turns out that it’s much more efficient for an algorithm to compute the path of light from the character’s “eyes” to the light source, instead of the other way around. And to make it even easier for the computer, the algorithm actually only computes the path of a few important rays, and then uses machine-learning to fill in the gaps.

Currently, you need a pretty expensive graphics card to play games with ray-tracing technology on high settings. But as the hardware gets better and cheaper, you can expect to see ray-tracing become a more common feature in video games.

“I think it’s paradigm shifting,” AJ Christensen, a visualization programmer at the National Center for Supercomputing Applications, told Wired. “There’s a lot of stuff that we’ve been waiting to be able to do. The imagination far precedes the technology, and I think a lot of people are excited and waiting for it.”

One frustrating part of modern video games is that non-player characters (NPCs) tend to be clunky and awkward. They’re generally limited to uttering a few lines of dialogue, or performing a few predetermined actions. But with better artificial intelligence, we might soon see NPCs that can react to players’ unique behavior, remember past interactions and alter the game’s storyline accordingly, similar to what Spirit AI is doing with its Character Engine.

“For example, say a pirate character is trying to make your life miserable but he senses that you’re happy,” he said. “The pirate’s goal is to change your emotional state to angry by communicating with you in some way. Next thing you know, he’s able to interact with you like a human would.

“Characters from novels or stories could be turned into interactive forms so we could talk to them. For example, someone might want to play Hamlet or one of the other characters in the play. Using artificial intelligence, Hamlet and others will be able to express emotions, have behaviors, and share knowledge. You might even be able to rehearse your lines with other characters. This is not like watching a movie—this is you interacting with others and being completely immersed in the game.”

Virtual reality is becoming increasingly popular, and its gaming market is expected to be worth $33 billion by 2023. A recent survey shows that most game developers agree that VR gaming headsets will continue to sell and evolve. But these products have a key limitation: locomotion. There are currently several common ways to move yourself (or your player) through a virtual world, such as: using a joystick, walking in place, or pointing and teleporting.

Star Wars: Secrets of the Empire – The VOID and ILMxLAB – Hyper-Reality Experience

But what if you designed a physical space to match the virtual world? That’s the hook of big-budget attractions like Disney’s Star Wars: Secrets of the Empire, produced by ILMxLAB and The VOID, which allows players to move untethered through a physical set that matches a VR game. Sure, it’s rather expensive, and the games are limited because the virtual worlds more or less have to spatially match the physical set, for safety reasons. But it seems likely that these types of attractions are going to become more of a draw. At least until VR games deliver even better locomotion at home.

What if intelligence can thrive without consciousness?
Neuropsych

A deep learning AI running on a supercomputer was able to link patterns of brain connectivity to political ideology.
Up Next
Hard Science

First Mars samples are headed to Earth. What are the risks?

A Mars Space Flight team member warns that people need to be prepared for what’s coming.