Nadine Strossen is the John Marshall Harlan II Professor of Law at New York Law School. From 1991 through 2008, she served as President of the American Civil Liberties Union,[…]
Go to Profile
In Partnership With
Charles Koch Foundation 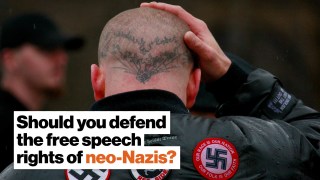 Should you defend the free speech rights of neo-Nazis?

Former president of the ACLU Nadine Strossen discusses whether our society should always defend free speech rights, even for groups who would oppose such rights.
▸
6 min
—
with
Nadine Strossen

NADINE STROSSEN: The American Civil Liberties Union, the ACLU, has always staunchly defended all fundamental freedoms for all people no matter who you are, no matter what you believe, we consider that you are entitled to fundamental and equal rights, including freedom of speech. And thats true even for people who reject and crusade against our own civil liberties principles. So this become very controversial, especially among people who are otherwise disposed to support the ACLU. How can you -- on the forefront of equal rights and anti-discrimination -- possibly support freedom of speech even for hate mongers? Probably the most famous or infamous situation in which that happened, depending on your perspective, was in a case called the Skokie case. For many people that immediately reminds them of what happen because it received so much attention. In 1977, the ACLU came to the defense of the free speech rights of a group of neo-Nazis who wanted to demonstrate in Skokie, Illinois, a town near Chicago that had a large Jewish population, many of whom were actually Holocaust survivors way back in 1977. And many ACLU members, stalwart champions of free speech, even ACLU members were so upset that we would really stick to those principles of defending freedom even for the thought that we hate, and thats a paraphrase for of a famous line from Supreme Court Justice Oliver Wendell Holmes, that we lost 15 percent of our card carrying members as a result of that case. I should add that we easily won the case in the courts of law because it happens that that neutral principle of freedom, even for the idea that we hate, is what the U.S. Supreme Court has called the bedrock principle underlying our free speech jurisprudence -- that government may never suppress speech solely because we the people, even the vast majority of us, dislike its views, its ideas, its message. Even if we loathe and despise and fear that message, the answer the court says is to raise our own voices in counter speech.

So that was an extremely painful moment for the organization; losing that many members was not only putting us in the spotlight of controversy and criticism, including for individual leaders of the organization were subject to threats and protests and harassment and ostracizing, especially leaders of the organization who were themselves Jewish. Our lead lawyer at the time was ashamed and rejected and repudiated by the rabbi in the synagogue that he and his family had belonged to, and ultimately things were so uncomfortable, you know, threatening phone calls in the middle of the night, ultimately he and his family moved out of state all together.

And I should say in our brief in the Skokie case, we pointed out that the very same principles that were relied on to defend free speech for the Nazis had been used just a few years earlier to defend free speech in another town in Illinois where it was Martin Luther King's organization whose message was very controversial in the southern part of Illinois, a town named Cicero, that was very segregated and very opposed to the pro-civil rights message.

We have to look beyond the particular factual situation and understand that we are fighting for something larger, which encompasses the idea that are antithetical to the ones that happened to be at issue in a particular case. So people will often say to me as somebody who is Jewish and the daughter of a Holocaust survivor who barely survived the Buchenwald Concentration Camp, how can I of all people defend the Nazis? And I always say I'm not defending the Nazis, I'm defending freedom of speech as an inviolable indivisible principal that is only going to remain strong if we continue to respect that bedrock viewpoint neutrality principal: denying government the power to suppress an idea merely because in one community that idea is deemed to be unpopular or hateful or hated. Because I know that in many communities in this country, ideas that I cherish as a civil libertarian, as a human rights champion, those ideas are seen as dangerous and are subject to censorship. So I'm not defending the Nazis, I'm defending a principle that is especially important for those of us who want to have the freedom to raise our voices to protest the Nazis and everything they stand for.

The media won’t get less politicized. News consumers must get smarter.