In our popular consciousness, public transportation dredges up images of graffiti, sullen-eyed workers, and urban riffraff. See, for example, every movie to ever feature a scene on a bus. Meanwhile, private transportation enjoys glowing fulsome marketing and even vehicle names—think Fiesta, Sonata, Forester, and Mustang—elicit feelings of wealth, class, and freedom.

This tendency leaves our popular consciousness blind to the many benefits of public transit. According to the American Public Transportation Association (APTA), public transportation yields $4 of economic return for every dollar invested. It increases business sales by helping workers get to work and customers get to stores. And it can help curb greenhouse gas emissions. In the United States alone, public transportation saves 4.2 billion gallons of gas annually.

Such benefits flow to individual households, too. For every dollar earned, notes the APTA, the average American household spends 18 cents on transportation, most of which goes to operating and maintaining a vehicle. Using public transit and having one fewer car, families could save as much as $10,000 a year.

Looking to augment these benefits, Luxembourg has decided to be the first country to lift all fares on trains, trams, and buses. 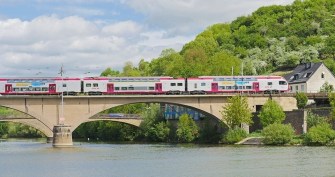 A Luxembourg train passes over a bridge.

Come on and take a free ride

Luxembourg will offer free fares on public transportation next summer. The change will be implemented as part of Prime Minister Xavier Bettel’s progressive and environmentally friendly platform, which he and his Democratic party ran on in the previous election.

In addition to limiting greenhouse gases, the fare-free policy also hopes to ease the country’s incredibly high congestion rate. Luxembourg sports 647 cars for every 1,000 people, and residents currently spend an average of 32.21 hours a year in traffic jams—great for getting through your audiobook collection but not much else.

Nor is such a move completely out of the blue. As Guardian contributor Daniel Boffey points out, Luxembourg’s public transit is already heavily subsidized and the fare-free system is just another step in its increasingly “progressive attitude to transport.” This summer, the government offered free rides to people under 20, as well as free shuttles for secondary school students. On average, commuters pay €2 for up to two hours of travel. In a country half the size of Delaware, that goes a long way.

Luxembourg also hopes that running costs will be reduced by removing the need to collect and process fares. But there are some issues remaining, such as figuring out how to prevent free-riding sleepers and urging those with means to reduce their car usage (i.e., the tragedy of the commons). 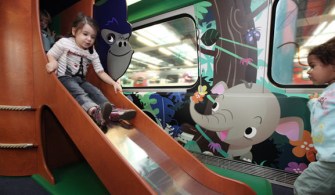 Swiss public transit is heavily subsidized and offers amenities such as this in-coach playground.

Some got a ticket to ride (and some don’t care)

Other countries plan to follow in Luxembourg’s fare-free footsteps. Estonia hopes to make bus travel free for citizens across the country, after a pilot program in the capital city of Tallinn proved popular. In Tallinn, residents have to register as a citizen and pay €2 for a “green card” to ride gratis. Thanks to the required registration, the city plans to make up costs with increased collection of taxes.

“A good this is, of course, that it mostly appeals to people with lower to medium incomes,” Allan Alaküla, head of the Tallinn European Union office, told Pop Up City. “But free public transport also stimulates the mobility of higher-income groups. They are simply going out more often for entertainment, to restaurants, bars and cinemas. Therefore, they consume local goods and services and are likely to spend more money, more often. In the end this makes local businesses thrive. It breathes new life into the city.”

Paris, France, is also looking to providing free public transport to reduce pollution, and the Swiss public transit system, while not free, is heavily subsidized and offers amenities such as family coaches with playgrounds.

Across the pond, the United States’ public transit system is moving in the opposite direction. John Rennie Short, professor at the School of Public Policy, University of Maryland, identifies four reasons for the decline in the quality and breadth of U.S. public transportation: our early adoption of the private vehicle, the abandonment of mass transit systems in the ’40s and ’50s, constrained governmental funding, and the tension “between private affluence and public squalor.”

“Building something new gives politicians a photo opportunity, replacing frayed electrical cable does not,” Short writes. “And there are many other claims on government such as pensions, schools, Social Security and a large military. Our infrastructure chasm is a quiet, slow-moving but relentless crisis only brought into focus when wires fray to the point of immediate danger.”

Political bifurcation has also stymied public transit system in the U.S. With the car the symbol of individualism, public transport has become associated with welfare and socialism, and politicians have voted accordingly. The U.S.’s top transit systems are located in the Democrat-leaning West and Northeast, while the Republican South has the worst. The Midwest is mixed. 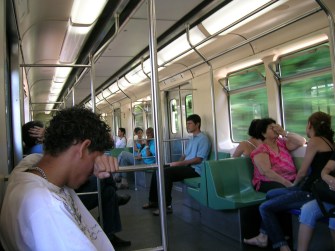 Tired people travel by the Belo Horizonte Metro in Brazil.

But just because Luxembourg offers free public transportation doesn’t mean it will be successful. Although Tallinn’s free-fare system is popular among voters, outcomes have been mixed. One study found that the capital’s fare-free system increased usage by 14 percent and improved low-income mobility; however, it also found that the program had little effect on ridership.

Similarly, the Swiss public system may be subsidized and resplendent, but private vehicle use still outpaces public transport by many billion kilometers.

Luxembourg also has to contend with a history of failed fare-free systems. Rome attempted such a system in the 1970s to ease congestion, but it proved a costly experiment. The city had to reinstate fares after only six months. In the U.S. Denver, Trenton, and Austin also had unsuccessful bids at fare-free systems. A report based on these experiments from the National Center for Transportation Research concluded that such fare-free services aren’t appropriate for large transit systems.

Writing for the Atlantic, Joe Pinsker argues that it makes more sense to implement free transit as a specialized tool, not on a grand scale. He cites the failed attempts mentioned above, but also Singapore’s successful program to comp commuter tickets for travel during non-peak hours.

“Perhaps the cost of public transportation shouldn’t be looked at from an angle of reducing traffic and emissions,” Pinsker writes. “Maybe free public transit should be thought of not as a behavioral instrument, but as a right; poorer citizens have just as much of a privilege to get around conveniently as wealthier ones. If the debate shifted from means-to-an-end thinking to pure egalitarianism, the hope of public transit might actually be realized.”

We’ll have to wait to see if Luxembourg bucks the trend Pinsker laid out. One thing is certain, though: The strains modern society puts on traditional infrastructure are enormous, and we’ll need a variety of new and reconsidered transportation approaches to ease it.

Tags
environmentEuropeglobal developmentInequalityinfrastructurepolicypoliticspublic spacessocial changetransporationurban planning
In this article
environmentEuropeglobal developmentInequalityinfrastructurepolicypoliticspublic spacessocial changetransporationurban planning
Related
The Present
The “maritime Indiana Jones” who salvages shipwrecks now wants to tow icebergs
Simple physics makes hauling vast ice chunks thousands of miles fiendishly difficult — but not impossible.
Life
Strange life forms create an “alien” ecosystem in an abandoned uranium mine
Slimy biofilms made up of bacterial and eukaryotic life forms have taken over an abandoned, flooded uranium mine in Germany.
The Present
Climate change is altering the chemistry of wine
Smoke taint from wildfires is gross, even to wine amateurs.
Life
Our antidepressant drugs are affecting animals and ecosystems
A toxicologist explains the impacts of antidepressants on fish — and no, they’re not getting any happier.
Hard Science
200 years of exploring Antarctica
What we’ve learning from the world’s coldest, most forbidding, and most peaceful continent.
Up Next
Starts With A Bang
Triton, Not Pluto or Eris, Is The Kuiper Belt’s Largest World
It may have been captured by Neptune since it formed, but Triton remains king of the Kuiper belt.Our Solar System is arguably the most well-studied corner of the Universe, with humanity […]