In 1997, I lived in San Bruno, just north of what has been referred to as Silicon Valley since 1971. While the term originally derived from the number of silicon chips produced in that region, today it is a catchall for the technological boom that’s been occurring there for a half-century.

Driving along the 101 or 1, the two highways that briefly connect in the Presidio, sharing the ride across the Golden Gate Bridge before again splitting in Marin County, there is very little that reminds you of technology: the Pacific on one side, the San Francisco Bay on the other, gorgeous scenery along the winding coastal roads. The region that changed the world with great advancements in technology is arguably one of the most aesthetically beautiful regions in the country.

The relationship between technology and nature — Life 1.0 — is longstanding. Many tech companies offer promises of, ironically, spending less time using technology so that we can “live life.” Virtual reality has us strapped into headsets; augmented reality is allowing us to superimpose characters and imagery over the actual environment. It’s an incredible paradox: we’re addicted to devices, yet we yearn for a connection with the planet that birthed us.

Perhaps nothing is more indicative of this than what’s occurring just outside of Copenhagen. The Danish government is constructing nine artificial islands, called Holmene, in the Baltic Sea just off the coast of Hvidovre to become a new tech hub. With over 33 million square feet of new land, the 10.5 miles of coastline will serve as both wind-powered office buildings and 170 acres of parkland. To be completed by 2040, the government hopes the site will attract 380 companies.

This said, the head of the Danish chamber of commerce, Brian Mikkelsen, told TV2 television in early January that he believes the new development could become “a sort of European Silicon Valley.”

Unlike businesses that exploit resources that contribute to climate change, Denmark is betting on an eco-friendly future. They plan on constructing Northern Europe’s largest waste-to-energy plant, which would turn their trash into enough fuel to power 25 percent of Copenhagen.

This is not the country’s first attempt to reimagine industrial regions becoming environmentally-friendly business and residential models. The Copenhagen Model was initiated 30 years ago and is credited with transforming the city from an area with high unemployment and declining industry into one of the wealthiest in the world.

The results of this institutional model have been nothing short of transformative. A vibrant, multi-purpose waterfront. A world-class transit system. Thousands of housing units built for market and social purposes in accordance with energy-efficient standards. 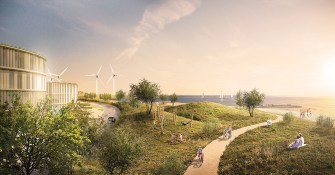 The project is not without its detractors, however. Fears that this new region will only service the wealthy can create the conditions for further inequality. As of 2016, Copenhagen had 19.4 million square feet of vacant office space; citizens argue that that space should be utilized first. New housing will unlikely be sold at affordable prices for the average citizen. A planned tunnel that would connect to the islands might negatively impact local traffic patterns, public transportation, and biking lanes.

Not to romanticize the past — I don’t always fondly recall the Mission of 20 years ago — but I do remember how much easier it was to drive around the Bay, to find parking and eat at an inexpensive taqueria on Valencia. All advancements come at a cost, but whereas a decade ago I wouldn’t think twice about jumping in the car for a five-hour drive from Los Angeles, today the notion of a San Francisco getaway is more likely to induce economic anxiety.

Which is what concerns the residents of Denmark. Technology brings out the best and worst in us. Applications and hardware that make life more convenient have a tendency of actually benefiting fewer and fewer people.

Still, we need better urban models that don’t deplete the environment of its limited resources. An influx of 30,000 jobs due to the creation of these islands can certainly benefit a lot of people. Unfortunately, there is no easy answer to such questions.

One thing not lacking is aesthetics. The architectural plans of Holmene are stunning. In that department these islands are a win.

What lies in store for humanity? Theoretical physicist Michio Kaku explains how different life will be for your descendants—and maybe your future self, if the timing works out.
▸
with
Michio Kaku

Thinking as a group and going along with the loudest voices can feel easy and even natural. But to make real positive change in our world, it’s important to hear all voices and question the perceived majority.
▸
5 min
—
with
Todd Rose
The Well

Dr. Sara Walker is an astrobiologist and theoretical physicist, who is questioning the very nature of life and how we’re attempting to find it elsewhere.
▸
6 min
—
with
Sara Walker
Up Next
Health

Thinking your life is worthwhile is correlated with a variety of positive outcomes.