If you’ve been reading the papers lately, you might have heard about a group of academics who have just fessed up to having written fake scholarly articles with obviously absurd subject matter and getting them published in journals of dubious quality. The phony articles included several papers consisting of lines of Mein Kampf with modern jargon thrown in, an essay celebrating morbid obesity as a healthy life-choice, and a study of table conversations at Hooters restaurants in an attempt to understand why some people like eating there among other fashionable nonsense.

Of their 20 faux articles, seven had been accepted with four already published and three being reviewed when the authors had to step in and announce that they had been conning the journals as the result of some journalists getting close to the truth. A great debate is already raging on what their stunt proves and if they are to be commended or shunned for it. It is a debate we’ve had before.

The strange history of academic stings

This kind of thing isn’t new. Purposefully ridiculous articles are often submitted to journals and conferences with questionable standards or a pay to play system to demonstrate these poor practices to the world. Some of the more amusing examples include a paper rated excellent by a vanity press journal that consisted of a single, strongly worded sentence repeated again and again and one that alleged the social construct of the male reproductive system is a “driver behind much of climate change.”

In a similar vein, many diploma mills have been exposed by having animals apply to them with semi-accurate resumes and being granted degrees. Several dogs and cats in the United States currently hold degrees as a result of these stings. 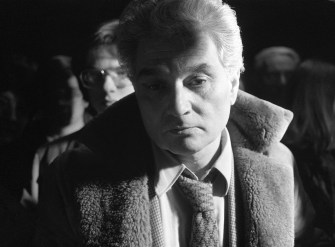 The French postmodernist Jacques Derrida as he appeared in 1982. He was drawn into the Sokal affair and criticized the whole thing as a distraction form real debate.

The Sokal Affair, the mother of all stings.

The most famous of these stings was carried out by physicist Alan Sokal on the publication Social Text in 1996. His article Transgressing the Boundaries: Towards a Transformative Hermeneutics of Quantum Gravity is a fantastic hodgepodge of jargon, quotes from postmodernist thinkers, and nonsense lines such as “It has thus become increasingly apparent that physical “reality”, no less than social “reality”, is at bottom a social and linguistic construct.”

Dr. Sokal was motivated by the so called science wars between some postmodern thinkers and scientific realists about the nature of science. He hoped to demonstrate by the article’s acceptance that some journals would publish utter nonsense so long as it agreed with them.

When the article was published, he immediately revealed the hoax. Most of the criticism towards his actions seemed to ignore the fact that a publication had gone ahead and given a platform to a man arguing that physical reality was a social construct and focused on him being mean-spirited, which Dr. Sokal himself pointed out in a follow-up.

Dr. Sokal and Belgian philosopher Jean Bricmont later did write a more academic response to what they saw as a tendency of postmodern journals to misunderstand science but publish articles with conclusions they supported anyway.

Their book, Fashionable Nonsense, has the same spirit as the hoax article, but approaches the subject by analytically looking at statements like “The attribution of tuberculosis and Koch’s bacillus to Ramses II should strike us as an anachronism of the same caliber as if we had diagnosed his death as having been caused by a Marxist upheaval…”

It then features the two authors explaining why such statements are nuts and why the journals that publish them are suspect.

A short history of knowledge, from feudalism to the Internet | Alice Dreger

What do these stings tell us?

While some more sensationalist writers would suggest that the Sokal affair kills off postmodernism or that this new sting signals the end of gender studies as a legitimate academic subject, these are wildly unsupported claims. Dr. Sokal himself explained that his example is often portrayed as saying much more than it does. He wrote in a follow-up article:

From the mere fact of publication of my parody I think that not much can be deduced. It doesn’t prove that the whole field of cultural studies, or cultural studies of science — much less sociology of science — is nonsense. Nor does it prove that the intellectual standards in these fields are generally lax. (This might be the case, but it would have to be established on other grounds.) It proves only that the editors of one rather marginal journal were derelict in their intellectual duty, by publishing an article on quantum physics that they admit they could not understand, without bothering to get an opinion from anyone knowledgeable in quantum physics, solely because it came from a “conveniently credentialed ally” (as Social Text co-editor Bruce Robbins later candidly admitted), flattered the editors’ ideological preconceptions, and attacked their “enemies”.

Likewise, in the recent string of hoax papers, only one or two of the journals that were duped were publications of note that anybody seems to read. While this is still problematic, the pranksters explain if they were trying to publish enough papers to try and get tenure they would have succeeded; it hardly means that there are entire academic fields were anything that adheres to the proper talking points will get published. That would require a much larger and more rigorous experiment than this.

The authors themselves understand this, saying in their explanation of the hoax:

We managed to get seven shoddy, absurd, unethical and politically-biased papers into respectable journals in the fields of grievance studies. Does this show that academia is corrupt? Absolutely not. Does it show that all scholars and reviewers in humanities fields which study gender, race, sexuality and weight are corrupt? No. To claim either of those things would be to both overstate the significance of this project and miss its point. Some people will do this, and we would ask them not to.

They remind us, however:

This does show that there is something to be concerned about within certain fields within the humanities which are encouraging of this kind of “scholarship.” We shouldn’t have been able to get any papers this terrible published in reputable journals, let alone seven.

The authors also admitted that the journals they targeted would not publish obvious hoaxes and a fair amount of work had to be put into creating fake articles that would slide past the radar. Despite their work, six of their papers were rejected outright.

How to detect baloney the Carl Sagan way | Michael Shermer

Why did they do this?

Co-author Helen Pluckrose explained the motivations of the trio when she said:

“It is worth mentioning that all three of us are left-leaning liberals who think rigorous scholarship in the areas of gender, race and sexuality is important. We see the type of scholarship we have been exploring as a hindrance to obtaining genuine knowledge by which to achieve social progress,”

There were hoping to hold academia to high standards, and showed that a few bad apples weren’t keeping those standards. They weren’t out to troll people.They were just trying to reveal a problem in some journals’ methods.

As long as there are journals with less than ideal standards and pay to play operations, there will be writers with a sense of humor exposing them with hoax articles. While it might not be the most polished way to bring such issues to light, it did get you to read about the problem and launched a discussion.

All of the hoax papers can be found on this public access drive created by the authors.

Wizbang innovations capture the public’s imagination, but thoughtful, incremental development is often more valuable to those in need.
Thinking

A group of prominent scientists shares how research has changed them.
Strange Maps

For the first time in nearly 1500 years, fewer than half the people in England and Wales consider themselves Christian.
The Present

“My dad asked me if I had been to tutoring and I lied… Then he showed me the tablet.”
The Present

Inequality should be measured in terms of the time it takes for us to earn the money to buy the things we need. And everyone is getting wealthier.
Up Next
Strange Maps

In more than a dozen countries as far apart as Portugal and Russia, ‘Smith’ is the most popular occupational surname