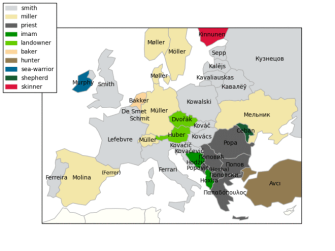 Meet the Smiths, Millers, Priests and Imams – the most popular occupational surnames across Europe.

Although very few people are smiths by profession these days, there are millions of Smiths by surname the world over. It’s the most popular surname in Britain, Australia, New Zealand and the United States, as well as the second most popular surname in Canada and the fifth most popular one in Ireland. And they’re a thriving bunch, at least in the U.S.: the 2010 Census (1) counted 2,442,977 Americans called Smith, 2.8% more than in 2000.

Curiously, ‘Smith’ also is one of the most popular surnames across most of Europe –translated in the various local vernaculars, of course. This map shows the most common occupational surnames in each country. By colour-coding the professions, this map shows a remarkable pro-smith consistency across Europe – as well as some curious regional exceptions.

‘Smith’, in all its variations, is the most popular occupational surname throughout Europe. Not just in the UK, but also in:

‘Miller’ on top in many Germanic-language countries

‘Miller’ is the most popular occupational surname in many Germanic-language countries, but also in Spain and Ukraine (perhaps because the grain in both countries is mainly in the plain):

Clergy surnames rule in the Balkans

Catholic clergy must remain celibate, so ‘Priest’ as a surname is rare to non-existent throughout Europe. Except in the Balkans, where Catholicism is largely absent. Here, the Orthodox and Islamic clergies have passed on the title from father to son, eventually as a surname, to popular effect. Orthodox clergy are addressed as papa or pope (which means ‘father’ – so the surname rather redundantly translates to ‘father’s son’). Islamic teachers or imams are known by the Turkish/Persian term hodzha. An overview:

Landowners and other professions

Austria and the Czech Republic have different national languages but are neighbours and share a lot of history. Could that explain why they have a similar most popular occupational surname, for ‘landowner’?

Just four professions, that wraps up all but five countries on this map. Those five each have their very own most popular occupational surname:

Judging from the popularity of these surnames, your generic European village of a few centuries ago really couldn’t do without a smithy. It was a much more essential craft even than that of the miller (or the baker, who put the miller’s flour to good use) – except in the Balkans, where spiritual sustenance apparently sated a greater need. On the outskirts of Anytown, Europe live the shepherd and the hunter, the skinner and the pirate.

A bit too simplistic? Perhaps not simplistic enough. This map could have been dominated by even more Smiths. As the original poster explains, he always picked the most frequent version of an occupational surname, even if multiple variants point to a more popular alternative.

Same story in Germany: added up, there are more people named Schmidt, Schmitt, Schmitz and Schmid than Müller. Ditto for Spain: Herrero, Herrera and Ferrer together outnumber Molina. Also in Finland, where Seppä, Seppälä and Seppänen together have a higher count than Kinnunen.

Smiths in other cultures

‘Smith’ was a crucial occupation in other cultures too, judging from the familiar ring it has in these languages:

​Other most popular surnames

As this sample of most common ones for each country shows, surnames can refer to a host of other things. Personal qualities or physical attributes, for example:

Another option: the origin of the name-bearer (be it a place or a person):

But sometimes, even for the most popular ones, the exact origin of the surname is lost in time:

So why exactly is Smith – and not Miller, for example – the most popular surname in many English-speaking countries? The theory propounded by historian C.M. Matthews in History Today (July 1967) probably also holds for the other-language variants so popular throughout Europe:

“The reason for (the) multiplicity (of the surname ‘Smith’) is not so much that metal-workers were numerous as that they were important and widespread. On the skill of the smith, both rich and poor depended for the most essential things of life, the tools of husbandry and the weapons of hunting and war. Every community in the land must have one, every castle, every manor; and so distinctive was his trade that he would seldom need another name”.

That does not mean all people with the surname have a forefather who forged iron into weapons and farm tools. Especially in North America, ‘Smith’ was adopted by many people precisely because it was already common – as a secret identity or to blend in, for example by natives, slaves and immigrants.

Psychologists are finding that moral code violations can leave an enduring mark — and may require new types of therapy.
Up Next
High Culture