Even though the thought of gold calls to mind incredible wealth hidden underground or horded away in Fort Knox, you can actually find the stuff all over the place. there’s gold in nearly every kind of consumer electronic, gold in our sewage, gold in the cracks of New York City sidewalks, and even trace amounts in our brains. The trouble isn’t that gold is rare, per se, it’s just hard to get to.

In human history, we’ve mined about 190,000 tons of gold out of the ground. If you want to visualize that amount, it would fit in a box about 20 m on each side; not all that much in the grand scheme of things. We’ve been able to get at this because it was stored in a way that’s relatively easy for us to access. It was buried in the Earth, so we just had to dig it up. In contrast, we’ve estimated that there’s about 20 million tons of gold in the ocean—it’s just distributed throughout the seas, making it difficult to refine and extract.

In the past, we didn’t use gold for much of anything besides as a method to store value, so the fact that most gold on Earth was inaccessible was more of a feature than a bug. But now, we’re increasingly finding practical applications for the precious metal. It can be used in medicine to treat arthritis or for dentistry; it’s an excellent conductor, so it can be used in electronics and communication technology; and it reflects infrared radiation, so we use it on our spacecraft and spacesuits. Suddenly, getting at those 20 million tons of gold in the ocean and elsewhere on Earth has become more about technological and societal progress than about accumulating wealth.

New research from the Journal of the American Chemical Society has uncovered one of the most effective methods to date to extract gold from liquids. That includes electronic waste, sewage, ocean water, waste water—almost any liquid where we might find gold. Just to highlight how potentially useful this is, sewage from Switzerland alone is estimated to carry away 1.8 million dollars’ worth of gold every year.

The object to the left shows the basic framework, a lattice of iron ion clusters connected by organic molecules. On this structure, a polymer that helps catch gold is coated, represented by the purple dots.

Making a sponge for gold

The method consists of a metal-organic framework—essentially, clusters metal ions connected by an organic “skeleton.” In this case, the framework consists of iron ions connected by an organic compound called 1,3,5-benzenetricarboxylate. The researchers then coated this structure in a polymer with an even more difficult-to-pronounce name (for the curious, it’s poly-para-phenylenediamine, or PpDA), which helps the framework catch stray molecules of gold.

Essentially, the framework and polymer work as a very granular sponge, only this sponge doesn’t hold soap or water; instead, it holds gold.

Other researchers have built structures like this one before, but the new framework works exceptionally well. For every gram of this gold-seeking sponge submerged in a liquid, it can hold up to a gram of gold. What’s more, it can catch 99% of the gold in a given solution in as little as two minutes.

Once the framework’s sucked up the gold, it can easily be destroyed to retrieve the gold captured inside. The figure below shows how this works. After it’s been suspended in a gold-containing solution, the framework is dissolved in hydrochloric acid. After some time, all that’s left is 23.9 K gold, which is the highest purity of gold reclaimed from similar projects.

The researchers tested the method out in a few different real-world cases. One of the most useful applications for a method like this is in reclaiming gold from electronic waste. It can take as much as a ton of gold ore to build just 40 smartphones, so getting the gold out of electronic waste would be extremely practical.

The researchers physically removed the metal from a CPU and treated it with some chemicals to form a solution. In the figure below, you can see that this produced a blue solution. So far, this technique is nothing new. The trouble is that a CPU also contains copper and nickel as well as gold, all of which is mixed up in this solution. So, the trick is how to get the really valuable metal out of the mixture. Using the new method, the researchers managed to get 95% of the gold out of the solution. 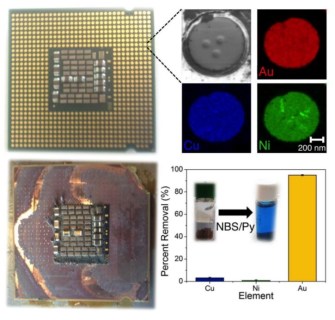 The top-left image shows a regular CPU. To its right, we can see the various elements that comprise the CPU (copper, nickel, and gold). In the bottom-left corner, we can see the CPU after its material has been physically removed. The image to its right shows the material dissolved into a blue solution and a graph showing how much of each material the new method recovered from the solution.

They found similar results with different liquids, too. The new framework captured 99% of gold from Swiss sewage (which, if you’ll recall, allegedly washes away $1.8 million worth of gold every year). The researchers also tried extracting gold from seawater, and, once again, they were able to extract 99% of gold from their sample. These last two examples are especially promising; sewage and seawater contain a huge variety of different compounds that could interfere with any kind of filtering system.

We’re still a long way off from, say, filtering the oceans for the precious metals they contain. But as we continue to use up the easily accessible resources buried in the Earth, exploring new techniques like this will be important if we want to continue to use smartphones, explore space, and collectively advance as a society.

Some artifacts drown in shipwrecks, others are taken by the tide. Many others will vanish as a result of climate change and rising sea levels.
High Culture

Rare and costly paints have shaped art history in unforeseen ways. Mummy brown caused one artist to bury his paint.
The Future

A two-dimensional material made entirely of carbon called graphene won the Nobel Prize in 2010. Graphyne might be even better.
The Past

The largest accidental explosion of all-time

More than a century ago, Halifax suffered an accidental blast one-fifth the size of the atomic bomb dropped on Hiroshima.
Up Next
Health

The results come from a 15-year study that used ultrasound scans to track blood vessels in middle-aged adults starting in 2002.