Now that billionaire Stephen Ross’s fundraiser for Donald Trump is a footnote, backlash over a handful of his properties — most notably, Equinox and SoulCycle — will die down, presenting an intriguing question: Who will actually suffer from all those canceled memberships?

Last week, these fitness communities were outraged by the announcement. I was finishing up a workout around 7 a.m. when I received the first text. Since November 2004, I’ve taught a variety of formats for the club at dozens of locations. Reading the forwarded tweet was a metaphorical suckerpunch.

The reason — and the reason why Equinox and SoulCycle were picked out among the Ross’s extensive portfolio; you haven’t heard about a Milk Bar boycott — is that Equinox has long been a leader in socially-progressive causes. While businesses supporting the LGBT community is common today, the fitness chain was championing gay rights and transgender issues well before most would touch it. It has long been a point of pride (in every sense) for staff and members.

As has Cycle for Survival, an annual multi-city fundraiser that has donated $221 million — since 2007 — to Memorial Sloan Kettering for rare cancer research. The event is an ecstatic reminder of what is possible when we devote our time, money, and sweat to an important cause.

Which is why the Ross fundraiser frustrated so many people. A seemingly progressive company supporting what many liberals consider to be the most socially-regressive administration in modern history immediately angered a large segment of the population — within and outside of the clubs.

Equinox and SoulCycle did not help by posting an inaccurate portrayal of Ross’s role. Regardless of his involvement in daily operations — or how the financial stake between Related (his parent company) and Equinox is structured — he profits from our success. Claiming that he’s a “passive” investor belittles the collective intelligence of the public they’re trying to appeal to, and it failed drastically.

Inevitably, the fiasco turned into a barrage of well-intentioned but ultimately futile tweets that, in the words of Trump himself, only made Ross “much hotter.” The fundraiser, we can imagine, went off without a hitch, while a number of former gym members are investigating boutique studios. The question about who will suffer from this controversy, however, is one that will largely be ignored.

We already know the answer, even if it’s not hashtagable. If clubs suffer an economic hit, classes will be reduced (less work for instructors, fewer options for members); trainers will lose clients; sales jobs, arguably the hardest and most monitored job in the company, will become even more strenuous; member fees will increase; management positions will be reduced, putting more pressure on remaining managers; and front desk and maintenance staff will be cut.

The latter is especially pernicious given that a large percentage of maintenance workers is comprised of immigrants, once again highlighting the disconnect between armchair activism and real-world consequences.

This is all not to say voting with your dollar is irrelevant. The days of separating business and politics are, at least for the time being, over. Knowing what your money supports has always been important, but never has it been more broadly discussed than now.

Here’s where my personal concern resides: I’ve talked to friends that quit Equinox who do not vote, nor do they pay much attention to politics in general. This protest makes them feel socially active even as their actions ultimately harm the populations they believe they are helping — a failure of imagination in exchange for a quick dopamine hit.

There is a lot of discussion about the lack of education in populations that vote for a man who does not care about their interests whatsoever. But so-called liberal enclaves suffer from misguided politics when engaging in “cancel culture.” Ross has owned Equinox for 13 years; three minutes of online research reveal his previous donations, which, while showing prior support for Trump, also include a number of progressive causes as well.

This is not a free pass for fundraising for a reprehensible man intent on destroying the moral fabric of America. Yet, while recently visiting New York City I didn’t notice protests outside of the David Koch Theater at Lincoln Center, even though the Koch fortune has arguably done more to veer our nation toward nativism and identity politics than any other. Such donations are tax write-offs for billionaires trying to raise their public image, yet in a capitalist society funding for the arts depends on these checks. It might not be the culture we want, but it’s part of doing the best with what we have.

After making a similar charge regarding Amazon on social media, I was accused of “whataboutism.” Guilty as charged. When I followed up by asking what will be done to support those actually harmed by the Equinox boycott, a whole lot of no replies and pivots ensued. 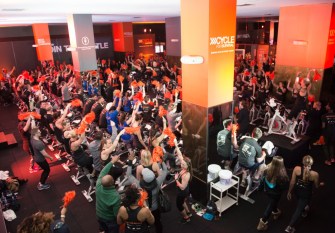 A view of cyclists during Cycle For Survival at Equinox Bryant Park on March 12, 2017 in New York City.

Firing off tweets is easy; donating, canvassing, and most importantly, voting — engaging in our civic process at the bare minimum — requires thought and effort. It demands of us the willingness to keep our attention sustained over long periods of time, from boycott to supporting those that will potentially lose their job, a challenge in an era where even this Equinox situation is already old news.

You have to be critical of the things you love. Many fellow employees were outraged when Equinox took away employee health benefits in 2017, replacing them with the most ludicrous plan imaginable (while charging the same rate as previous, robust coverage). Then too they spun the news in an equally ineffective way. Some staff quit, others had to search elsewhere for health coverage. That outrage was also intense though it never reached the level of public engagement.

We need protests in America; we need many more than we currently have. More importantly, we must contemplate and discuss and not get triggered by the consequences of our protests if we want to understand how our actions really play out. And we must stick with them when they’re no longer trending.

José Andrés, the restauranteur that responded to Trump’s abandonment of Puerto Rico by serving 150,000 meals a day on the island, provides context. Andrés settled a lawsuit with Trump after pulling out of a restaurant deal following the then-candidate’s disparaging remarks about Mexicans. His latest restaurant, Mercado Little Spain, is in Hudson Yards, Related’s newest venture. When asked if he was going to distance himself from Ross, he said:

“If we are going to start tomorrow breaking with everybody that has relationships or supports people we don’t agree with, we will be living in anarchy.”

These are complex issues. Just as Ross now recognizes that you can’t support Trump’s tax cuts without accepting the racism and intolerance that comes with it, progressives need to take a more holistic view of the effects of their actions. Otherwise, infighting and blind outrage will only echo what Gil-Scott Heron warned about in 1974: “Four more years of that?!”

Psychologist Daniel Goleman shares what he learned by studying the brain waves of Olympic-level meditators, and his findings are unprecedented.
▸
4 min
—
with
Daniel Goleman

Is social media changing your memory? Here’s what the science actually says.
▸
3 min
—
with
Lisa Genova
Up Next
Career Development

Be the Most productive version of yourself, with CEO Kathryn Minshew

Be the Most Productive Version of Yourself: A Millennial Insider’s Guide to Getting More Done, with Kathryn Minshew, CEO and Co-founder, The Muse Figure out your most productive time and […]