You know who’s one of the world’s leaders in tackling greenhouse gas emissions? You might be surprised to know that the venerable corporation that brought us Mickey Mouse is staying ahead of the pack by following through on its pledge to cut emissions by 50 percent. Disney’s goal is to reach half the emissions it had in 2012 by the year 2020.

One big way the entertainment juggernaut is making its commitment a reality is by opening an enormous new 270-acre, 50-megawatt solar facility in Florida. It went online in 2019 to provide clean renewable energy to the Walt Disney World Resort in Orlando. As stated on Disney’s blog, the facility will generate so much power, Disney will be able to use it to operate two of its four theme parks in Central Florida.

The new solar farm, consisting of more than half a million panels, will majorly reduce net greenhouse gas emissions, lowering them by more than 57,000 tons per year. As reported by the New York Times, Disney estimates the amount of energy the facility can produce would be enough to power 10,000 homes annually. That’s also as much as getting 9,300 cars off the road.

Check out how the new solar factory was put together here –

The new solar farm joins other Disney efforts towards its green goal. In 2016, the company opened a 22-acre, 5-megawatt solar facility that’s shaped like Mickey Mouse. Its Tokyo Disneyland also uses solar power from rooftops to generate more than 600 kilowatts for its electrical parade light. Disneyland Paris is also in on the green game, utilizing geothermal energy for the power needed in two of its theme parks as well as a hotel. Disney’s Shanghai Resort makes use of a cooling and heating plant that cuts emissions by 60 percent.

“Our guests tell us the environment is important, so it’s a big deal for us,” explained Mark Penning, vice president of Disney’s Animals, Science and Environment in a 2018 interview, adding that the company wants to be admired “not just for creating incredible content, but for being a responsible citizen of the world.” 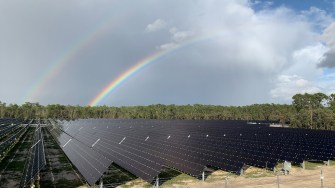 Here’s how the Mickey Mouse solar farm looks from the ground.

We want to fight invasive species. But to wage a war, you have to know who your enemy is.
The Future

They are expected to be cheaper to build and even more reliable than today’s nuclear plants.
Up Next
Starts With A Bang

This Massive Black Hole Is Mysteriously Quiet, And Astronomers Don’t Know Why

Galactic mergers should push gas and dust into the centers of galaxies. So why are these two so quiet?Scientists have studied the closest, largest, brightest galaxies to Earth for centuries.Located close […]