In March of 2011, the tectonic plate that lies under the Pacific Ocean lurched its way below the neighboring Okhotsk tectonic plate, which supports a portion of the Japanese islands. As the Pacific plate burrowed beneath the Okhotsk, it produced a megathrust earthquake, among the most powerful types of earthquakes to occur.

The resulting Great East Japan Earthquake became a magnitude 9, the strongest ever in Japan’s recorded history and the fourth most powerful in the world. In addition to the earthquake itself, Japan was rocked by a resulting tsunami 133 feet high and several nuclear meltdowns at the Fukushima nuclear power plant. All told, the World Bank estimated the disaster’s economic cost at $235 billion.

Suffice it to say, the earthquake was quite a shock to the people of Japan and has left a lasting impression. But the earthquake may have done more than just destroy property and scare civilians — research from the American Economic Institute suggests that the 2011 earthquake made Japanese men more prone to taking risks. 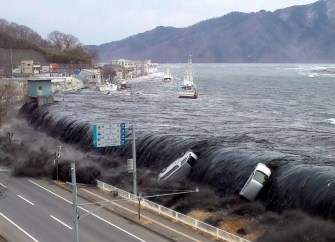 A tsunami breaching the coast of the city of Miyako in Japan.

Prior research had shown that natural disasters affect victims’ risk tolerance, but there had never been an opportunity to compare data from before a natural disaster. Since the JHPS is distributed to the same people over regular intervals, the tragedy of the 2011 earthquake also represented an exciting research opportunity. With this dataset, the researchers set out to determine how negative experiences affect risky behavior and to gain insights into the broader economic impact of disasters. 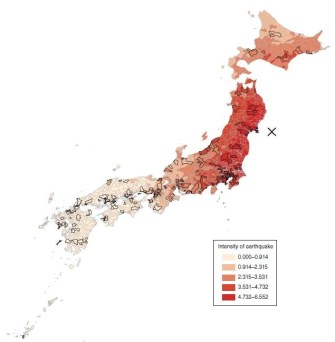 A map representing the 2011 earthquake in Japan. The “X” marks the earthquake’s epicenter, and the municipalities outlined in black were included in the study sample. The intensity of the earthquake is color-coded by municipality, ranging from 0 to 6.552 on the JMA Intensity Scale.

To start, the researchers narrowed down the several thousand respondents to the JHPS to ensure a good sample for their study. They collected data from seismic monitoring stations scattered across Japan and selected 277 municipalities that experienced the earthquake in varying intensities.

Since earthquakes are so common in Japan, the Japanese use their own seismic intensity scale, the Japanese Meteorological Agency (JMA) Intensity Scale, which ranges from 0 to 7. Some municipalities experienced little to no seismic activity while others experienced a 6.552 on the scale. Importantly, most of these municipalities were not exposed to the tsunami or the Fukushima disaster, making it easier to attribute any changes in risk tolerance directly to the earthquake.

Using data from the JHPS and comparing it to the varying intensities the respondents experienced, the researchers were able to directly quantify how much the personalities of the victims changed. They used JHPS data from directly before the earthquake in 2011, data from soon after in 2012, and data from the JHPS distributed five years later. 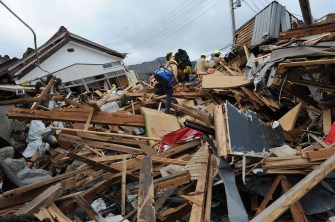 To assess risk-taking behavior, the JHPS poses a lottery scenario to its respondents, asking how much money an individual would be willing to risk for a 50/50 chance to win more. Because the question is fairly straightforward and there’s only one of its kind in the survey, the researchers also collected data from the JHPS on risk-taking behavior such as gambling, drinking, and smoking.

As it turns out, not only did the respondents appear to be more tolerant of risk in the lottery question, they also engaged in riskier behavior, especially gambling. The most interesting finding, however, was that this held true only for men. Women actually showed a slight increase in risk avoidance, although this effect was too small to be considered definitive. But when it came to men, the change was dramatic.

Why was this the case? Research on gender differences regarding risk is too scant to offer any solid conclusions, but there is some evidence out there that can help fill in the picture. Men tend to take more risks than women, especially under stress. What’s more, men and women change their risk-taking behavior in response to different emotions. Men, for instance, become more tolerant of risk after feeling angry, while women become more averse to risk after feeling disgust.

The results of this study hint that something similar might be at play here. In addition to providing a quantified scale based on the intensity of an earthquake, the JMA Intensity Scale also provides descriptions of the human reactions that take place at different earthquake intensities. At a level 1 earthquake, for instance, people who are quietly at work in a building will likely feel some subtle movement. At levels 4 and 5 , the earthquake is of a sufficient intensity that people become startled and afraid.

Looking at the various municipalities and their corresponding earthquake intensities, men started to become more risk tolerant only when the earthquake registered a 4 or above, suggesting that the experience of fear had transformed their personalities in the long-term. Why strong feelings of fear make men more tolerant of risk, however, remains unclear.

In tough competitions, men tend to give up early when they feel a low sense of control. Testosterone eradicates that effect.
Up Next
Starts With A Bang

Here’s Your Proof That We Landed On The Moon, Steph Curry

Apollo 11 brought humans onto the surface of the Moon for the first time in 1969. Shown here is Buzz Aldrin setting up the Solar Wind experiment as part of […]