A number of massive geo-engineering schemes have been proposed for dealing with climate change. These range from brightening the sun by pumping seawater spray up through ship masts, to dimming it by injecting calcium carbonate dust into the atmosphere. These ideas may or may not work, but they also may or may not backfire.

We can hardly afford to make things worse, and Earth is a big, interwoven set of complex systems. Wouldn’t it be great if we had a sort of practice Earth on which we could try out such potentially high-impact solutions without risking additional harm to our planet?

We may soon have one, thanks to the European Union’s new Destination Earth project. Climate scientists and computer experts are attempting to create Earth’s digital twin: A virtual Earth that mirrors the real one closely enough that policymakers can audition planet-changing geo-engineering proposals to see if they’ll work before deploying them for real.

Their project is described in a study published in the journal Nature Climate Change. 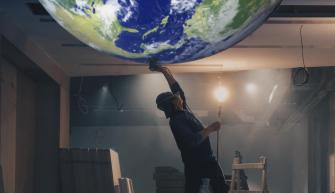 Destination Earth is the brainchild of the European Centre for Medium-Range Weather Forecasts (ECMWF), the European Space Agency (ESA), and the European Organization for the Exploitation of Meteorological Satellites (EUMETSAT).

The project manager and lead author of the study is Peter Bauer of the ECMWF. His contribution to the project has to do with the climate science aspects of Earth’s virtual twin. The computer side of things will be the domain of Torsten Hoefler of ETH Zurich and Thomas Schulthess of the Swiss National Supercomputing Centre (CSCS). 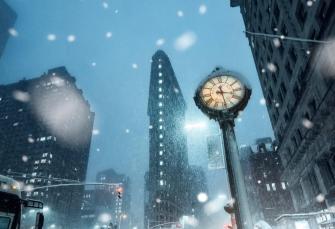 The basic idea of the digital twin is that it will allow scientists to observe climate change in motion as it progresses. “If you are planning a two-meter high dike in The Netherlands, for example,” says Bauer in an ETH press release, “I can run through the data in my digital twin and check whether the dike will in all likelihood still protect against expected extreme events in 2050.”

Most important will be trying out geo-engineering ideas and seeing how they track over time. The press release specifically notes the value the twin will bring to “strategic planning of fresh water and food supplies or wind farms and solar plants.”

Capturing the subtleties and intricacies of our planet faithfully in order to model plausible outcomes is going to require an equally complex computer model. Construction of the digital Earth begins with the refinement of current weather models, with a goal of eventually being able to simulate conditions in as small an area as a kilometer. Current models are not nearly as fine-grained, a shortcoming that hampers their ability to make accurate predictions given that the large weather systems are really aggregates of many smaller meteorological systems influencing each other.

The authors of the paper assert that today’s meteorological models fall far short of what’s possible, their development having basically become stuck in place about a decade ago. They say that current models take advantage of only about 5 percent of today’s available processing power. The solution is the tight collaboration between Earth scientists and computer scientists at the heart of Destination Earth to develop cutting-edge models.

The twin will also be able to take advantage of rapidly advancing developments in artificial intelligence. Obviously, AI is very good at detecting patterns in large amounts of data. The study anticipates multiple roles for AI here, including the promotion of operational efficiency with new ways of accurately representing physical processes, as well as the development of novel data-compression strategies.

The team will feed the twin massive amounts of weather data—as well as data regarding human activity—to get the digital planet going and then continually as new data emerge, making the model more and more complex and more and more accurate.

At full scale, a digital twin of an entire planet would require a suitably massive amount of horsepower. The authors of the study propose a system with 20,000 GPUs that will require 20 megawatts to run. And since the ultimate goal is to help the Earth and not make things worse, they say they’d like to site its digital twin in an area power from a CO2-netural electrical source.

From hellishly hot planets to water worlds, some distant planets are like nothing in our Solar System.
Life

On Nov. 15, 2021, U.S. officials announced that they had detected a dangerous new debris field in orbit near Earth. Later in the day, it was confirmed that Russia had […]
The Present

Why China, Russia, and other autocracies may wield an AI advantage in global cyberwars

In his new book, “The Wires of War: Technology and the Global Struggle for Power,” Jacob Helberg outlines the brewing cyberwar between Western democracies and autocracies like China and Russia.
Up Next
Neuropsych