A note from the editors: We came to know Roy Arce because he is persistent. Admirably so. His emails reached us at a time when we are refocusing on building a Big Think community. We want to hear the big ideas on our readers’ radars.

Roy didn’t reach out to us alone. He estimates he’s spoken to almost 400 people, from police officials and politicians to the leaders of tent cities in Oakland, California. Roy has had a dramatic set of experiences. He’s a veteran with PTSD for whom one minor interaction with the law spiraled into extended contact with the criminal justice system. Now, he has a detailed set of ideas for how the policing system can become more human, and how homelessness in his community can be addressed. We spoke to him about his big idea for change.

Roy Arce: PTSD is no joke. PTSD to me can be the product of being in the military, or it can affect any human being at any time. A car crash, divorce, loss of job, no family, drug abuse, gangs, head trauma from life and sports, etc. One form of PTSD I would like to bring up is the PTSD produced by bad community policing dynamics. We all suffer from this – we suffer as individuals, as a community and even economically on local, city, state and country levels.

The community-police relationship has been broken for a long time. It’s so disconnected that officers out of the Chicago PD have been committing suicide while on shift or on the beat. That fact is horrible! Our police departments need our help and we should give them the help they need by providing better tools and more community involvement.

We can work together (we meaning the police and the community) to hopefully fix it. I am in no way saying the criminal justice system needs to be replaced, but it has lots of room for improvement. We must stand together on a common platform and speak up for the voiceless. I was the voiceless before. Thank you for this – I am eternally grateful and will always be eternally grateful for this opportunity.

Big Think: How has PTSD touched your life, personally?

Arce: Regarding my PTSD, I have two kinds. One is the military PTSD; even though I did not see combat, I became a different man. The other is what I call street PTSD.

Growing up in Oakland as a little Costarican kid was tough. I’ve seen dead bodies in the street. Seeing one of your friends get shot in the neck and then crawl under a car to rest and die is not cool for anyone, and no person dealing crack or heroin should have to experience it either. I didn’t deal crack or heroin yet it was all around me when I was younger. I have bagged heroin; I did it for three months but never sold it. I had a big change of heart at 14 and stopped that behavior. My friends all continued and all are almost dead or have disappeared.

There are beautiful things out there yet imagine what it’s like to not ever have left your community and the only thing you know is crime. We have to do more for the people, the broken souls who have lost hope in society because, at a point, I can guarantee you, society turned its back on him or her. Whatever causes PTSD in the community doesn’t matter, what matters is that we are the ones who get to fix it.

“There are beautiful things out there yet imagine what it’s like to not ever have left your community and the only thing you know is crime.”

Big Think:Tell us your idea for a new kind of policing team.

Arce: In Alameda County, policing has lots of room for improvement. I have concentrated my efforts and research in the City of Oakland.

We need a community policing team. Every call that comes in should get at least one police officer and one community peace team representative (CPTR). The CPTR would join the program though a new app like Uber and would have to be trained and certified. The CPTR’s responsibility would be to better address situations. The individual would be equipped with tools to be able to divert the situation from a hazardous environment to a more mediated and controlled situation. I truly believe that most of the minor offenses facing our police officers, which turn into these incredibly bad situations, can be overturned by a more proactive, peaceful and understanding way of policing. The names for the community policing team I’m thinking of proposing are the Street Marines or Road Runners or Street Sweepers (influenced by MLK) – but I’m open to other ideas.

The point is to bring options, other sets of eyes and fresh feelings to hopefully mediate the policing of homelessness and 5150 incidents. Our target is to better address, process, and manage LGBT youth, homelessness, and any minor offenses.

Please let’s not forget all the PTSD these situations are causing. I believe addressing bad community policing dynamics is for the benefit of all. Hopefully we can put together a safety net program to assist our officers with better community policing. 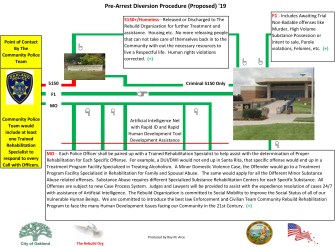 A high-level view of Roy’s proposal for a Community Police Team to divert prison processing and PTSD for minor arrests and charges.

Big Think: What made you draft a proposal and start talking to legislators?

Arce: I haven’t been an angel yet I know we deserve better than what the current system is providing. My experiences at Santa Rita Jail have all been unpleasant and a waste of time. First of all, the population is mixed. We have killers and murderers mixed in with minor offenders. I am not scared, yet those conditions were a bit disturbing.

People are going to jail for minor or felony offenses yet are receiving almost close to zero rehabilitation opportunities. In no way do I want to sound like I am excusing bad behavior. People are voluntarily doing bad because they don’t have the tools they need to get over the bump they might be in. The police right now, instead of being more proactive, are making things worse because of lack of empathy and soft skills training.

Sandra Bland, Eric Garner, Isaura Cecilia Moreno – these are just a few cases where excessive force was used where a mediator would have handled it completely differently.

A tent city in Oakland, California.

Big Think: PTSD and homelessness appear to be deeply connected. Can you explain the second part of your idea to tackle street PTSD?

Arce: If you stand long enough on East 14th Street and Fairmont in San Leandro, you’ll be able to see what I am talking about; people who have nowhere to go, not dressed to face the weather conditions. It is sad. Why not have a sanctuary place for these type of folks?

It is everywhere – young and old, straight or gay, they’re part of a vicious circle in which they do not have the means to get out of it. These good people doing bad things end up dead or, even worse, getting abused by the streets, taking PTSD to a whole different level.

I decided to really look at the issues and try to come up with the best way to address homelessness. My idea is to create a few sanctuary towns in northern California for animals and humans to coexist and at the same time cure PTSD with an overload of empathy and soft skills training. Why not? Sometimes we must just do it, just like Nike says. If people are in camping conditions in the city, why not give them the option to camp in the middle of a beautiful forest, to heal with and by Mother Nature? The GDP produced would be exotic fruits, vegetables etc. – self-sustainable sanctuaries to treat the broken of our cities. I would talk to the president about this.

There are enough experts within just the Big Think network alone to put together the greatest PTSD healing curriculum. I really believe we can do this – bring the tools our community needs to better get along and heal from prior PTSD. Empathy and unconditional care would be the key for the success of this pilot program.

Big Think: How are your conversations to make this proposal into policy going?

Arce: 95 percent of the people I spoke to are 100 percent on board, from the Governor’s Office to the Chief of PD Oakland to LISC to Big Think. The 5 percent against were concerned about the funding and how the politics will work.

I’ve spoken to the people in the street. I believe I would not have a problem pulling 300 people a year off the street for the rest of my life and helping a team rehabilitate them to the point of being game changers in any industry they choose to join and receive training in. I quit my career as a steamfitter to try to make this happen. It might just be me dreaming again – yet why not? Can someone answer the question?

If you are interested in helping Roy gather support for his proposal or you want to learn more, you can connect with him on LinkedIn.

Unreasonable burdens prevent people from thriving. Eliminate them.
Up Next
The Present

University of Texas to offer free tuition for low-income students