To say that Amazon is America’s biggest e-commerce marketplace is almost an understatement. In 2019, the company generated approximately $280.5 billion in revenue. More than one-third of all US e-commerce sales came through Amazon last year. Scores of offline retailers have blamed Amazon for crushing them into the dust and poaching their customers.

But no retail giant is too big to fail, as other behemoths have demonstrated before Amazon. Sometimes they end in a bang, sometimes in a whimper. So far, Amazon has weathered accusations of ignoring product safety and has gotten away with paying $0 in taxes on its 2018 revenue, but to the not-so-secret delight of the businesses it destroyed on the way up, Amazon is looking more vulnerable today than it has in years.

In the case of Amazon, it’s possible that its downfall could be the novel coronavirus and the disease it causes, COVID-19. This could be a silver lining for local businesses and e-commerce SMBs (small and medium-sized businesses) that are themselves trying to weather the economic upheaval of the outbreak.

Many experts have issued dire predictions that the coronavirus pandemic will wipe out scores of small businesses, but there’s been less talk about the possibility that it could bring down a giant like Amazon. And yet the signs are there if you look closely. 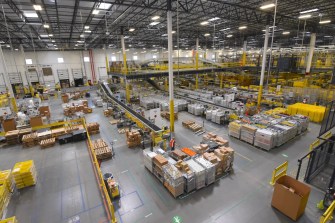 Amazon faces a paradox that could break the system. On the one hand, it’s seeing a massively increased demand for household goods, groceries and medical supplies like hand sanitizer and face masks. While this should mean more revenue for Amazon, it also places enormous stress on its supply chain.

Amazon operates on the principle of “just in time” delivery, which means that fulfillment warehouses never hold a lot of stock for any given product. It’s based on the assumption that logistics are in place to ship more items as soon as stock levels begin to fall, but panic-buying depletes the inventory before manufacturers have the chance to respond.

What’s more, disrupted worldwide logistics are delaying shipments, and even the US trucking network, which is the lifeblood of Amazon, is facing disruptions. Truckers are avoiding cities with shelter-in-place laws, complaining about the impact of corona regulations, and often face extra journeys to reach the goods they need to deliver.

Amazon is reshuffling logistics to prioritize essentials, but this in turn is damaging their ability to meet ongoing, although lower, demand for non-essentials. Bear in mind that “non-essentials” includes things like children’s toys and games, electronics, and home sports equipment, all of which are in demand from parents and others stuck at home.

On top of that, most of Amazon’s sellers ship their products from China, where industry is currently operating at least 13.5 percent below normal production rates. “How well stores keep products in stock will determine if they thrive or lose share in this crisis,” said Sucharita Kodali, vice president and principal analyst at Forrester Research. The jury is still out on whether Amazon will pass this test. 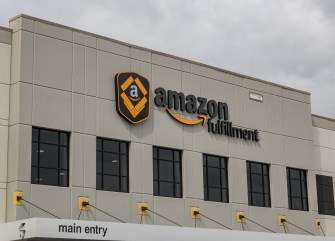 The fall of third-party sellers

It would be ironic if Amazon’s fall were to come about due to the failure of its third-party sellers, given that Amazon has received so much criticism for pushing smaller retailers and brands out of business. Yet it remains a possibility.

Over 50 percent of Amazon sales are made through third-party sellers, and they are the foundation of the company’s meteoric growth in the last few years. However, Amazon has been slowly selling them out, and COVID-19 could finally push them under.

For many vendors, Amazon is their only point of contact with customers. But now Amazon is turning away shipments of “non-essentials” to FBA (Fulfilled By Amazon) warehouses, in order to support smooth flow of essentials. This decision has affected approximately 53 percent of Amazon sellers, preventing them from shipping products to their customers.

Sellers who don’t use FBA warehouses aren’t affected by this, but part of the rise of Amazon has been to make FBA extremely attractive to both sellers and consumers. For sellers, using FBA gives them a better shot at winning the Buy Box and allows them to surrender the hassles of delivery and returns. Consumers enjoy faster delivery and the reassurance of the Amazon brand when sellers use FBA. As a result, only 6 percent of Amazon sellers don’t use FBA, and they are the only ones who’ll benefit from this decision.

Vendors are reportedly already looking at alternatives like Flexe, which can give more flexibility for storage than Amazon. If FBA loses its appeal, could the rest of the Amazon pyramid topple as well?

Adding insult to injury, Amazon still hasn’t responded to seller requests to suspend in-house Amazon Working Capital loan payments, subscription fees, and other costs associated with selling on the platform. Amazon might weather the corona storm only to find that its Marketplace has walked away. 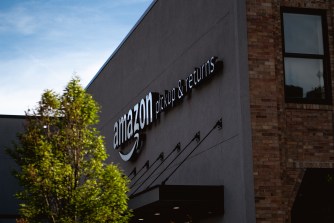 Photo by Bryan Angelo on Unsplash

Failure to deliver on a core brand promise

However, the same disrupted supply chain, spikes in panic buying, and quarantine conditions in some cities are preventing Amazon from delivering on this brand promise. Some Prime deliveries will reportedly take up to a month to arrive, rather than two days.

At a time when communities are rallying to support local businesses in crisis, it’s possible that negating a key aspect of its value proposition could be fatal for Amazon. If the company can’t deliver in every sense of the word, then the previously loyal customer might just as well shop at the mom-and-pop grocery down the block that will deliver in the same timeframe. The customer would feel good about supporting their local business ecosystems, with less harm to the environment.

Additionally, many people using Amazon during the outbreak are first-time users who can’t get out to shop at their usual local store. They’ve heard a lot of hype about Amazon’s fast deliveries and have high expectations. Instead of meeting those expectations, Amazon is disappointing new customers with delays and short stock/out of stock messages. That is turning off people who could otherwise have become loyal shoppers, and hampering Amazon’s future growth, if not its current stability.

We can’t ignore the direct impact of COVID-19 on Amazon’s situation. So far, workers at ten warehouses have tested positive for COVID-19. In some cases, only the affected workers were directed to self-isolate and the fulfillment center continued to operate. Others had to be shut down for deep cleaning, disrupting Amazon’s responsiveness further just when it needs it most.

A warehouse in Kentucky has had to close indefinitely after staff members protested being sent back to work, showing that angry employees do have the power to bring down Amazon.

Amazon also stands accused of not doing enough to protect workers, including failing to notify them about COVID-19 cases in their workplaces, refusing to pay for coronavirus-related sick leave until pressured into doing so, and not supplying enough cleaning materials to keep warehouses sanitized.

The threat of potentially fatal infection could push away even the most desperate for work Amazon employees, and the outbreak has brought political pressure on the company to improve its employee relations.

Finally, the global COVID-19-provoked economic slowdown is also going to impact Amazon’s retail revenue. At a time when people are losing jobs and watching businesses collapse, they are spending far less than usual on extra purchases.

Prime Day in July brings in a significant segment of Amazon’s revenue, but it’s unlikely that most economies will be in good enough shape to support mass materialism by then.

What’s more, small to medium businesses are pulling back on spending in order to preserve their cash flow. For many, one option is to delay a shift to the cloud, reducing demand for Amazon Web Services (AWS). According to the company’s earning report for Q4 2019, 67 percent of its operating income came from AWS.

As SMEs drop out of business, AWS stands to lose still more customers.

History teaches us that nothing is inevitable until it happens, but there are strong signs that Amazon could be reaching the end of a long run. Disrupted supply chains, disgruntled sellers who see the downside of relying on Amazon, failure to deliver on a core brand promise, a desire to support local businesses, and the direct dual impact of disease among workers and a global recession dragging down demand could between them deliver a flurry of punches that could leave Amazon down and out.

Tags
AmazoncoronavirusCOVID-19ecommerceeconomics
In this article
AmazoncoronavirusCOVID-19ecommerceeconomics
Related
The Past
How people crossed the Atlantic Ocean before commercial aviation
For centuries, the only way to travel between the Old and New World was through ships like the RMS Lusitania. Experiences varied wildly depending on your income.
The Past
How the crusades spawned the world’s first financial services company
The Knights Templar were not only skilled fighters, but also clever bankers who played a crucial role in the development of Europe’s financial systems.
Surprising Science
What happens when two different respiratory viruses infect the same cell?
A new study looks at what happens when you get infected with two viruses at the same time.
The Present
To the moon? Five microeconomic lessons from Bitcoin
Bitcoin is often derided as volatile, but a new report suggests there is a method to the madness.
Health
Want to live longer? You may need to move
Longevity gets a new motto: location, location, location.
Up Next
Starts With A Bang
This Is The One Symmetry That The Universe Must Never Violate
The combination of charge conjugation, parity, and time-reversal symmetry is known as CPT. And it must never be broken. Ever.The ultimate goal of physics is to accurately describe, as precisely as […]