On January 23, 1973 one of the world’s most active volcanoes began erupting on the Icelandic island of Heimaey. Home to over 4,000 people (and eight million puffins), the eruption posed an existential crisis: the lava was going to destroy their homeland. Incredibly, the eruption continued for nearly six months. Yet island residents had no intention of giving up.

In The Control of Nature, New Yorker writer John McPhee writes about the heroic effort spearheaded by physicist Thorbjorn Sigurgeirsson, who had the idea of cooling the lava. Though half the city was destroyed, his plan worked. Today Heimaey residents have a physicist to thank for their continued, yet always tenuous, existence.

All life is tenuous, one of those inconvenient truths we only face when forced. In McPhee’s book, a compilation of three New Yorker articles, the writer covers the existential terror residents of Los Angeles’s hilltops face, with the constant fear of “the big one” in the back of their minds; he also discusses the peril of living in New Orleans, predating Katrina by decades.

Still, humans live in places that are simply not habitable, at least in the long-term. When we find out that fact, still we cling tight to an environmental heritage we refuse to give up.

Our pride will be, and often is, the death of us. That’s why a new article on “managed retreat,” published in the journal Science, is going to be relevant in the coming decades. Climate change will force mass relocations on a previously unthinkable scale. Better to begin the process now before time has run out.

The three authors, all of whom studied at or work for Stanford University, believe managed retreat isn’t a submission, but rather a smart policy decision that will allow societies to adapt and thrive rather than succumbing to the imminent dangers of climate change.

Seaside Property Owners May Be Forced To Retreat

Seaside Property Owners May Be Forced To Retreat

Despite the current administration’s denial of basic climate facts, other government agencies, such as NASA, clearly detail the problems we are facing. Even if we completely change our carbon-dumping ways today, there is no escaping damages already caused—tragically, nor is the world going to change its ways in the immediate future. The American political party most likely to put forward smart solutions refuses to even hold a debate on the topic.

As with human nature in general, the authors—A.R. Siders (the University of Delaware), Miyuki Hino (Stanford University), and Katharine J. Mach (the University of Miami)—write that retreat is often treated as defeat. That negative connotation blinds us to preparation necessary for a successful managed retreat.

Since the process is usually ad hoc, communities forced to retreat are not adequately taken care of at both ends: in the regions they’re leaving and those they’re relocating to. By reconceptualizing retreat as a societal goal, they believe we can better wrap our heads around the entirety of the process.

“We propose a reconceptualization of retreat as a suite of adaptation options that are both strategic and managed. Strategy integrates retreat into long-term development goals and identifies why retreat should occur and, in doing so, influences where and when. Management addresses how retreat is executed.”

One problem is short-term financial gain on coastal regions, the exact areas that will first have to be abandoned. For example, I currently rent an apartment on the west side of Los Angeles. As my wife and I begin to look for property to buy, it will certainly not be in the region we currently live. The notion of taking a 30-year mortgage in an area that could be uninhabitable in a few decades makes you reconsider the term “underwater” in every possible context. 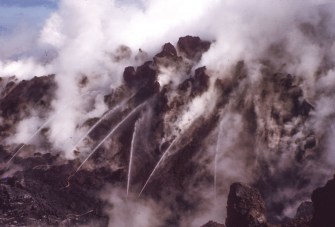 Volcano eruption on Heimaey Island in Iceland on 23 January 1973. Firefighters working on controlling the lava flow by cooling it down with water so it does not flow into the harbor.

That kind of foresight is no longer an option. There is no more speculation regarding coastal retreat. The entire state is just beginning to deal with that reality. How we deal with that—what we do with existing infrastructure; how and where we build new developments; what regions are best for agriculture and public works—is a question we will collectively face in the near future. Given recent reports on the state of the Arctic, that future is nearer than imagined.

As the authors conclude, managed retreat affects both individual psychology and market forces, which is why preparation is key. If we can begin planning for the forthcoming reality now, the better off we’ll be as upcoming generations deal with the ravages of the last two centuries of industry.

The hardest aspect of managed retreat will likely be forcing the polluting agents, such as oil companies, to listen to environmental science. As American lobbying efforts have proven over the last half-century, you can purchase the legislation that best suits your interests. This needs to change immediately.

If this frightening yet informative Science article teaches you one thing, let it be this: there is a path ahead, but we have to initiate the process now. That requires communities that will be hit hardest to force their governments to take action. As they note, different regions are on different time scales. Los Angeles will likely not need to move as quickly as Miami, yet the sooner we begin, the better it will be for everyone.

At least one nation is already planning for the inevitable: Indonesia has announced plans to move its capital to Borneo over the next decade, as Jakarta is sinking. Climate change might not be the main driver of this initiative—poor city planning is mostly to blame, which has resulted in polluted waterways—but considering rising sea levels are part of the equation, let this serve as a template that many other countries will soon need to implement, whether they like the news or not.

Deliveries of the $250k Lightyear 0 will start in November 2022.
Up Next
Health

How many other disease-fighting compounds might we find in the ocean?