In March of 2019, Chinese President Xi Jinping called on Chinese educators to “nurture generation after generation [of young people] who support Chinese Communist Party rule and China’s socialist system.” What does this mean for the state of scholarship in China? Toeing the line between the right and wrong viewpoint is a serious matter for scholars in that country. It can be the difference between a fulfilling career and being barred from research, removed from the country, or even imprisoned.

This interconnection between government and education is ancient — think, Plato’s “Republic.” Any society needs to bring new members into conformity with the order that society aims at. In the U.S. this is called civics education and comprises understanding the rules under which our society is structured. These rules allow a wide degree of individual freedom rooted in individual rights. Citizens must understand those rights and how those rights constrain and protect us in our interactions with each other and the government. Traditionally in the US many of these rights are also not seen to be the sole privilege of citizens but what are owed to humans as many are extended to non-citizen residents and visitors.

Authoritarian governments that rely heavily on coercion must be more intrusive about how education shapes the personality and character of its members. The system erected by the Chinese Communist Party’s (CCP) rests on control by the party. As such, the government looks to prohibit thoughts and actions that would undermine party control.

Consider the case of Liu Xiaobo, the scholar and human rights activist who, along with more than 300 other Chinese citizens, signed Charter 08, a political manifesto demanding freedom of expression, human rights, and economic liberalism in China. According to Chinese officials, signatories of this statement were guilty of “inciting subversion of state power.” Liu was sentenced to 11 years of imprisonment though he died of liver cancer after serving eight. 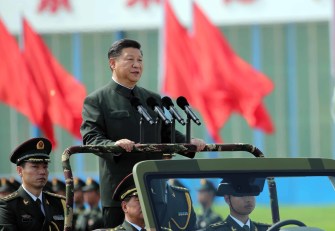 In China, there are topics that scholars know to avoid. First are the Three Ts: Taiwan, Tibet, and Tiananmen Square. There are also seven additional subjects that educators are forbidden from teaching that are listed in the so-called Document Number Nine, a document circulated amongst the CCP that was leaked in July 2013. These seven forbidden subjects are those that promote Western constitutional democracy, universal values, civil society, neoliberalism, Western-style journalism, “historical nihilism,” and questioning China’s reforms and socialist nature.

This document was first leaked in 2013, the same year that Xi came to power, and it is believed to have been developed or at least approved by Xi. Since its publication and Xi’s assumption of power, the CCP has wielded increasingly forceful influence over what is and is not permissible in China’s higher education system.

Chestnut Greitens and colleagues conducted such a study on over 500 researchers. They found that nearly 10 percent of their sample had been approached by authorities and “taken for tea,” a euphemism for when scholars are interrogated and intimidated. As one scholar relayed:

Our research group, consisting of Chinese and foreign scholars, were conducting survey research in [redacted]. Some elements of the research topic were considered politically sensitive. We were contacted by the county government, spent a full day “having tea” and discussing the project, and finally asked to leave the county. We complied.

A further 12 percent said their Chinese colleagues had been approached and asked about their work, roughly a quarter were denied access to archival records, and 17 percent had interview subjects withdraw in a suspicious or unexplained manner. The primary concern of these researchers, however, was not their own safety but rather that of their Chinese colleagues or informants. Researchers recommended paying attention to how mainland Chinese collaborators reacted, as they were far more likely to face the consequences of any politically sensitive research project. One researcher said, “This is more important than your publication or your tenure or your degree. If you think in these terms and observe cues of whether people are comfortable or want to cooperate, you should be OK.”

But these concerns can also persuade researchers to engage in self-censorship. In an interview with Big Think, Robert Quinn, the founder of the Scholars at Risk Network, discussed how researchers can be persuaded to do the CCP’s work for them:

We don’t understand how much our thoughts, our very thoughts and therefore our identities, are shaped by implicit permission to think that or ask that or say that. … When they come and haul away the professor in the office next to yours to prison, that affects whether you’re going to publish the next article. How do we measure that?

The report describes several features of Chinese academia with chilling effects on research, such as the use of student informants. These informants report on other students’ and teachers’ comments and activities for the CCP. Dezhou University in Shandong Province reportedly issued a directive to set up a student informant network intended to “destroy the seeds of discord that may affect security and stability before they sprout.”

Scholars that are perceived to sow “the seeds of discord” often face serious consequences. Some Chinese scholars reported having their travel restricted, being fired from their positions, being followed by plainclothes police, having their communications monitored, and having other measures taken up against them. For example, legal scholar Teng Biao, a signatory of Charter 08, was forbidden from publishing books and banned from teaching. In 2011, plainclothes police officers detained Teng, throwing a sack over his head, and held him for 70 days while he was beaten and tortured.

Screens were around in previous generations, but now they truly define childhood.
Up Next
The Present

Unequal gender dynamics still prevail even at the very top.