The Center for Disease Control has published research that shows a dramatic 25% increase in suicide rates since 1999. Half of all U.S. states experienced an increase of more than 30%.

The research also makes clear that in more than half of those deaths, the individuals were not diagnosed with a mental health condition. It’s a hidden problem for many people.

According to Dr. Anne Schuchat, principal deputy director of the CDC:

“These findings are disturbing. Suicide is one of the top 10 causes of death in the US right now, and it’s one of three causes that is actually increasing recently, so we do consider it a public health problem—and something that is all around us.” Alzheimer’s and drug overdoses are the other two causes that are on the rise, according to Schuchat.

In the year 2016 alone, 45,000 people died from suicide and Schuchat warned, “Our data show the problem is getting worse.”

As shown in the map below from the CDC, Nevada is the only state that did not experience an increase in the rate of suicide—though it’s still high at an average of 22 per 1,000 during years in the study period.

Also in that map is a clear pattern of high suicide rates in the Plains and Mountain states; this is partly due to lack of access to mental health professionals as well as a stigma about mental illness in rural counties but notably also a lack of access to good jobs and economic success. 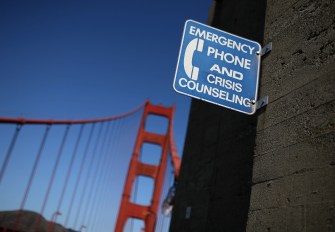 SAN FRANCISCO – OCTOBER 10: A sign for an emergency phone is seen on the span of the Golden Gate Bridge October 10, 2008 in San Francisco, California. (Photo by Justin Sullivan/Getty Images)

Sometimes when a famous person is in the news after committing suicide, there’s a tendency for people—especially fans—to want to do it themselves. Dubbed the Werther Effect, it’s very real. It also can happen when a close friend or family member commits suicide.

If you or someone you know needs to talk to someone, call (800)273-8255, the National Suicide Prevention Lifeline, 24 hours a day. Or for International folks, a list of crisis centers can be found here.

We confidently state that the Universe is known to be 13.8 billion years old, with an uncertainty of just 1%. Here’s how we know.
Up Next
Culture & Religion

A look at the life and work of Anthony Bourdain, who died at 61

The widely beloved chef, writer and TV host Anthony Bourdain was found dead Friday morning at age 61. Here’s a brief look at the work and life that made him an international culinary star.