A new method of capturing carbon dioxide before it enters the atmosphere represents a “paradigm shift” in the carbon capture industry, according to new research.

It would also likely be cheaper and more efficient than current techniques, which “are inherently inefficient due to thermal energy losses, large footprint, or degradation of sorbent material,” as the researchers describe in a recent paper published in the journal Energy and Environmental Science.

“[The technique] is just these very thin sheets, with both surfaces active, that can be stacked in a box and connected to a source of electricity,” MIT postdoc Sahag Voskian, who developed the method alongside T. Alan Hatton, told MIT News. 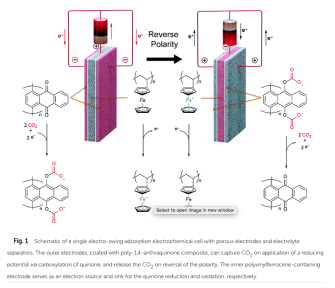 The key advantage of the technology is the electrodes’ unique ability to absorb (or, more precisely, “adsorb“) and release carbon dioxide efficiently during charging and discharging, without requiring intermediate steps.

“This binary affinity allows capture of carbon dioxide from any concentration, including 400 parts per million, and allows its release into any carrier stream, including 100 percent CO2,” Voskian told MIT News.

Carbon capture is the process of capturing carbon dioxide from point sources, such as a factory, before the gas enters the atmosphere. Once captured, carbon is typically stored underground or used for manufacturing purposes, like for carbonizing beverages. It’s a promising technique for reducing greenhouse gas emissions.

But even though more than 30 million tons of CO2 is captured every year, that’s still just a tiny percentage of the carbon needed to be captured in order to achieve environmental goals outlined in the Paris Agreement, according to a 2018 report from the Global CCS Institute. The hope is that new technologies, like the recent electrochemical approach, will make carbon capture more efficient.

Voskian said his team’s approach could be up to 10 times more efficient than some current carbon-capture and capture-absorbing techniques, and that it’d be relatively easy to scale up.

“If you want more capacity, you just need to make more electrodes.”

A medical entomologist points to metabolism, body odor, and mindset.
Up Next
Neuropsych

No, you don’t need to be a hoarder to have a clutter problem

Are you prone to “toxic accumulation”?