MIT engineers have developed a new method of making concrete without emitting carbon dioxide into the atmosphere.

Cement production is the largest source of greenhouse gas emissions in industry, accounting for 8 percent of total emissions worldwide. That’s why some have called on architects and builders to abandon cement.

“If we invented concrete today, nobody would think it was a good idea,” said architectural engineer Michael Ramage at the Architecture of Emergency climate summit in London in September. “We’ve got this liquid and you need special trucks, and it takes two weeks to get hard. And it doesn’t even work if you don’t put steel in it.”

But it seems unlikely that cement will disappear from industry, given its cheap price and reliability as a building material. So, instead of creating a new material, a group of MIT engineers decided to work toward more sustainable cement.

The new method uses an electrochemical approach that both eliminates the burning of fossil fuels and captures inevitable emissions before they seep into the atmosphere.

In a paper published in the journal PNAS on September 16, the researchers explain how CO2 is emitted at two main steps during the cement production process. The first occurs when coal is burned to cook limestone with sand and clay, the ingredients of the widely used Portland cement variety. In the new method, these materials would be heated using electricity generated from renewable sources.

“In many geographies renewable electricity is the lowest-cost electricity we have today, and its cost is still dropping,” Yet-Ming Chiang, lead researcher and the Kyocera Professor of Materials Science and Engineering at MIT, told MIT News.

Emissions also occur during the chemical reactions of these materials. That’s why the new approach depends on an electrolyzer, a device which uses electrodes to split water into hydrogen and oxygen. At one electrode, pulverized limestone is dissolved in acid, releasing a stream of highly pure carbon dioxide, which can be captured, stored, and potentially used for other manufacturing purposes. 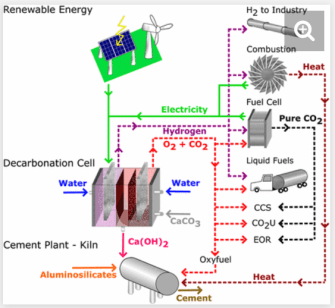 Scheme for a low-emission, electrochemically based cement plant. An electrochemical decarbonation reactor powered by renewable electricity converts CaCO3 to Ca(OH)2 for use in cement synthesis

Still, there’s no guarantee that the method can be scaled in a cost-effective manner. For Chiang and his team, the main goal was to spur people in the electrochemical sector to “start thinking” about ways to clean up the cement production process — to come up some innovative solutions.

“It’s an important first step, but not yet a fully developed solution,” Chiang told MIT News.

Environmental activists want us to feel “flight shame” if we can take a train, instead. But this isn’t entirely realistic, even in Europe.
Up Next
Neuropsych

Can we afford to live longer?

We’re living longer than ever, but few of us will save enough to afford this historical boon.