Last year, a minor ruckus broke out on social media about feral and indoor-outdoor cats decimating bird populations. According to research, cats do murder plenty of prey. As apex predators that is their biology, even at twelve pounds. The same is true with humans. We just like to pretend it isn’t.

Nearly a billion birds are killed every year by another insidious predator: windows. The panes we install to protect us from birds and every other form of nature, the same windows we stare out of while pecking diatribes against cats and everything else, are one of the largest culprits of avian death every year.

Humans flock to dense urban regions, which in bird chirps are known as “killing fields.” The five most perilous cities for migrating birds are Atlanta, Chicago, Dallas, Houston, and New York City. Manmade lighting emanating from the perches of skyscrapers confuse and disorient birds, a siren call into the seas of sky. Birds either fly straight into windows or circle neighborhoods, their inner GPS thrown off by spirals of light, until they fall from exhaustion.

One out of every eight bird species are now heading toward extinction. Fortunately, architects have taken notice. In fact, the Javits Center—New York City’s largest feathered morgue, it turns out—recently renovated it’s 760,000 square foot convention hall to become more bird-friendly. The redesign by FXCollaborative serves humans and our feathered friends: not only does it cut down on solar heat, the new glass has reduced bird collisions by 95 percent.

The American Bird Conservancy (ABC) published an online guide to helping designers, “Bird-Friendly Building Design.” According to this extensive report, colliding into glass is the single biggest bird killer in the nation—take that, cat haters. Besides aesthetics of sight and sound, birds play important ecological roles: they eat insects and control rodent populations, essential for preventing crop damage and disease transmission. Their role in pollination and seed dispersement is critical in creating diverse and healthy ecosystems.

The report then offers a deep deep dive into problems and solutions, covering three major areas. Below is a summation of the ideas proposed within. 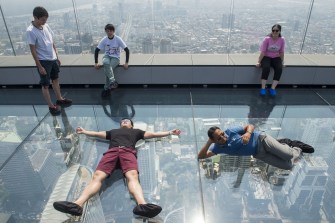 Tourists lie on the glass skywalk on the 78th floor of the King Power Mahanakhon skyscraper, Bangkok’s highest observation deck, during a polluted day in the city on January 28, 2019. (Photo by Romeo Gacad / AFP / Getty Images)

Just as humans are shocked when other humans don’t understand their point of view, we often assume other animals see what we do, which they don’t. Many people have unknowingly walked into glass; much worse for birds. Likewise, angles. The world is not designed with ninety-degree angles; our world is. Birds travel much differently. To make our environment more aesthetically pleasing, we’ve set booby traps everywhere.

Glass is predominantly invisible to humans. We’re clued in to its existence thanks to archways and doors. Most building glass reflects the sky; from a bird’s perspective, they’re simply continuing their journey. Birds also see the UV spectrum, which humans do not, making reflections from glass particularly dangerous.

Beyond buildings, windowed courtyards and open-topped atria pose their own challenges for birds, which come for the vegetation and become stuck searching for an exit ramp.

From the report, the following are ways to build with glass that reduce bird deaths: 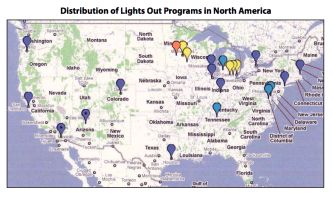 As mentioned, birds see the UV spectrum, creating unique problems that we’re completely ignorant of as a species. Add to this the problem of artificial lights damaging human eyes—blue light is one of the most pervasive in the smartphone age. While we’ve become accustomed to most artificial lighting, it tends to disorient other species.

For example, migrating birds are thrown off when flying lower than normal during inclement weather. Water vapor and fog refracts light, further confusing their trajectories. Like moths circling bug zappers, birds are drawn to illumination.

A few ways to manage this problem:

Finally, ABC is helping create laws to save the lives of birds. A proposed law in Illinois calls for any building built or altered by the General Services Administration to include bird-friendly design elements, while states like Minnesota and cities like San Francisco have mandated such design choices be used in specific types of buildings. These won’t save every avian life, but we have to start somewhere.

Tags
citiesdesignflightinfrastructureinnovationurban planning
In this article
citiesdesignflightinfrastructureinnovationurban planning
Related
The Future
How a device transmits radio waves with almost no power
Apart from the energy needed to flip the switch, no other energy is needed to transmit the information.
The Present
Radical idea: Redraw the U.S. map as a nation of city-states
While cities drive national economic growth, their political geography means they cannot effectively deal with inequality, poverty, and other socioeconomic problems.
The Present
How heat pumps of the 1800s are becoming the technology of the future
Innovative thinking has done away with problems that long dogged the electric devices — and both scientists and environmentalists are excited about the possibilities.
The Present
How California could save its rain instead of letting it drain into the ocean
Why can’t more rainwater be collected for the long, dry spring and summer when it’s needed?
Hard Science
Scientists use laser beam to divert lightning strikes
Laser-guided lightning systems could someday offer much greater protection than lightning rods.
Up Next
The Present
Andrew Yang on why universal basic income won’t make people lazy
The 2020 Democratic presidential candidate wants to give every American $1,000 a month – but will that disincentivize work?