Americans are buying more political books in 2018 than in recent years, though which books they’re picking up seems to depend largely on the political persuasion of their state.

Barnes & Noble recently released data to CNBCshowing a 57-percent spike in political book sales compared to 2017, as well as a map that shows how the political book sales of each state are strongly correlated with how that state voted in the 2016 presidential election. In other words, red states buy more books favorable of President Donald Trump, while blue states seem more interested in books critical of Trump—although there are five outliers. Book sales in New Hampshire, Wisconsin, Nevada, Colorado and Pennsylvania contradicted how they voted in 2016. It’s unclear why. 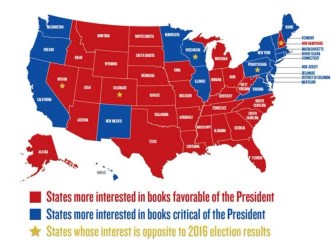 The top three bestselling books for the company were all mostly critical of Trump. At the top, by far, was Washington Post reporter Bob Woodward’s Fear: Trump in the White House, which sold more than one copy per second (upward of 750,000 copies) on its release day, Barnes & Noble said. Trump called this book, which included many incendiary interviews with high-level officials, a “work of fiction” shortly after its release.

Coming in second was Michael Wolff’s Fire and Fury: Inside the Trump White House, and third was James Comey’s A Higher Loyalty: Truth, Lies, and Leadership.

Gregg Jarrett’s The Russia Hoax: The Illicit Scheme to Clear Hillary Clinton and Frame Donald Trump, which, needless to say, painted Trump in a favorable light, came in at number four on the list. John McCain’s book, The Restless Wave: Good Times, Just Causes, Great Fights, and Other Appreciations, also made the top 10 list, but was not focused on the president.

Despite the boost in sales, Barnes & Noble executives have been considering selling the company, which is the nation’s largest brick-and-mortar bookstore, for more than a year. Last week, the company announced it was naming a special committee to review bids of prospective purchasers, CNBC reports.

Tags
americabooksDonald TrumpElectionsmapspoliticsVoting
In this article
americabooksDonald TrumpElectionsmapspoliticsVoting
Related
Neuropsych
Memory and the benefits of forgetting
Forgetfulness isn’t always a “glitch” in our memories; it can be a tool to help us make sense of the present and plan for the future.
Thinking
Creative wisdom from Rick Rubin: embrace your inner gatekeeper
Unlock the full potential of your creativity with holistic detachment. This is the way of the editor.
Thinking
“Give a f***, actually”: The surprising benefits of being grateful for things you dislike
Radical Emotional Acceptance calls on you to celebrate all of life’s emotions — even the negative ones.
Thinking
Visual thinking: How to understand the inner lives of animals
Humans are good visual thinkers, too, but we tend to privilege verbal thinking.
The Present
How circular economics can make us happier and less stressed
Entrenched business wisdom says that community-led economic systems are pure fantasy. Douglas Rushkoff disagrees.
Up Next
Optimize the video and Buy YouTube views
Search engine optimization or SEO is considered as one of the best ways to optimize a video. For everything online, success can be achieved with SEO. Therefore, it is relevant […]