The Great Pyramid itself, built by the Pharaoh Khufu (or Cheops) is one of the oldest monuments standing. It’s 456 ft. high (139 m) and thought to be around 4,500 years old. This is the largest of all the ancient pyramids and one of the most impressive structures ever built by human hands. It’s also puzzled modern scholars in a number of ways.

How exactly it was built has been the biggest question and it’s been mulled over for centuries. Despite our advanced technology, experts still don’t agree on how it was done. Fortunately, a discovery about the Great Pyramid offers a new avenue for us to explore, in order to gain insight into how it was built. Researchers used a unique method to visualize the internal architecture of Khufu’s Great Pyramid, one of Earth’s most iconic structures.

Remember the pyramid isn’t only a monument but King Khufu’s tomb. This greatest remnant of Egypt’s Old Kingdom contains several spaces with connecting corridors including a King’s Chamber, Queen’s Chamber, and a Grand Gallery—essentially an enormous passageway 153 ft. long (46.6 m) and 26 ft. (7.9 m) high. It terminates in the pharaoh’s chamber.

These scientists found a space sitting atop the Grand Gallery that’s at least 98 ft. (30 m) long and perhaps longer. This is the first time since the 19th century that a chamber inside of the Great Pyramid has been discovered. Researchers still aren’t sure if it’s horizontal or vertical, and if it’s one large chamber or two, or even a series of chambers. 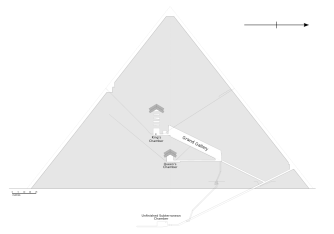 The internal structure of the Great Pyramid. By Jeff Dahl, via Wikimedia Commons

Some dream of priceless treasures being unearth. UK Egyptologist Aidan Dodson told Scientific American that there’s no chance of a new burial chamber having been discovered. What’s so compelling though is that no one knows what’s in there.

Engineers, physicists, and archeologists contributed to this research as part of the international collaboration known as the ScanPyramids project. That’s in turn part of the Heritage Innovation Preservation Institute (HIP). HIP is a nonprofit located in France, dedicated to preserving humanity’s cultural heritage through the use of modern technology. The scientists teamed up with colleagues at Nagoya University in Japan to probe the Great Pyramid in an entirely new way, using high-energy particle physics.

Cosmic rays constantly bombard the Earth, but the upper atmosphere takes the brunt of this onslaught. What’s left over are harmless particles known as muons. These make it to the surface in vast multitudes. Blast these subatomic particles through an object with a sensor on the other side and you’ll get a glimpse of the object’s internal architecture. The more muons put out, the better your visual. So that’s what researchers essentially did to the pyramid.

This same technology is often used for understanding the internal network of tunnels which make up a volcano, and it was also used to determine the situation with the Fukushima Power Plant’s damaged reactor when it melted down. A similar attempt was made with muon detection in a smaller pyramid in the 1970s.

Nothing was found at that time, but the method has improved significantly since then. Sensitive muon detectors have been fashioned for work in particle accelerators, and these have helped bring this discovery to fruition. 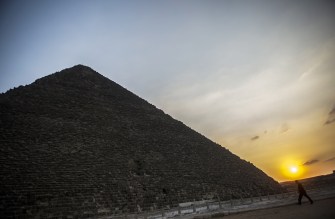 The mysteries of the Great Pyramid may soon be solved. Credit: Getty Images.

Kunihiro Morishima of Nagoya University was the lead researcher on this study. He and colleagues launched this project by placing muon detectors in the Queen’s Chamber in December 2015. Muons can travel through rock, depending on the type and density. Knowing this, scientists were surprised when many more muons were received by their sensors than expected, meaning they were passing through a large void.

Dr. Morishima soon called in help from Japan’s High Energy Accelerator Research Organization and France’s Alternative Energies and Atomic Energy Commission. The teams of scientists used different kinds of muon sensors and detector films to trace back these subatomic particles and develop a more sophisticated picture of the anomaly inside. This second leg started in August 2016 and wrapped up in July of this year. Readings were taken at multiple locations in and around the pyramid.

There are several theories on what the chamber might be for. It could be a “relieving chamber” to take weight off the Grand Gallery. It could be part of a sophisticated counterweight system that helped raise the granite which comprises the King’s Chamber. Or it could be part of a ramp that helped masons construct the pharaoh’s final resting place. More research will hopefully yield a greater understanding of this millennia-old enigma.

The quantum world is one in which rules that are completely foreign to our everyday experience dictate bizarre behavior.
Hard Science

Maybe the brain isn’t “classical” after all.
Up Next
Thinking