Jared Yates Sexton wants to destroy the myth of American exceptionalism. The associate professor of creative writing at Georgia Southern University began political reporting in 2015, just as the last presidential election began taking form. Covering this beat, he realized how little he knew about our nation’s founding, the contours behind the straight line we’re taught by default (and intention). So he decided to learn. The result is his exceptional new book, “American Rule: How A Nation Conquered The World But Failed Its People.”

Think of American Rule as a modern companion to Howard Zinn’s “A People’s History of the United States”—books that, if our public education system was honest with itself, would be required in high school curriculum. Education is not about comfort, and Sexton was certainly discomfited while researching America’s origins.

One example of many: our democracy has been shaped completely by white identity politics couched in evangelical religious language. Trees depend on the mycelium field of the forest; this specific brand of Christianity is the fungus that has nurtured generations of conflicted messaging between what we claim to stand for and who we really are. As Sexton told me earlier this week,

“This idea that America is ordained by some sort of Christian god or all-mighty being, or even if we’re just carrying out the will of the Universe, that myth was used from the very beginning of this country to paper over a lot of terrible mistakes, terrible treatment, and manipulations that ran counter to our espoused principles. From the very beginning, this has been a weaponized mythology.”

As a boy growing up in conservative southern Indiana, Sexton realized in adulthood that he’d been raised in the “Cult of the Shining City.” Ronald Reagan’s unforgettable mythos of America’s infallible greatness is but one stop along the way of centuries of idealism hiding a genocidal past.

Obviously, not the history we’re taught. Sexton says modern American evangelicalism is rooted in the Christianity of the Confederacy. Discussions about the Civil War tend to focus on generals. Even the current conversation about statues, while important, doesn’t sufficiently peel back layers to expose the racism and xenophobia underneath—reparations would provide a better conversation.

“There’s absolutely no reason we don’t understand as Americans how the country was founded, except for the fact that we’re hiding something unseemly that is used as the basis of control.”

America’s leaders were suspicious of the public’s intellect well before that war. The founding fathers created our particular system of democracy because they didn’t trust common people. The protection and success of white, wealthy landowners has always been the focus, regardless of the generational veneer pained over the top.

At one point, Sexton had to leave his desk and walk around. The Moundbuilder Myth made him shake his head in disbelief. This conspiracy theory promoted the idea that Native Americans were not sophisticated enough to build mound complexes in the Ohio and Mississippi River Valleys and throughout the Southeast, which must have meant Europeans were on the land well before indigenous people. This myth was so woven into the societal fabric that Andrew Jackson, who Sexton calls “a total genocidal madman,” mentioned it during the State of the Union address.

This isn’t the only flummoxing footnote. Americans are particularly primed for paranoia. As he says, “You cannot understand modern America without understanding conspiracy theories.”

The recent horrors of hysterectomies performed without consent (not a conspiracy theory) point to another long-standing stain on America’s reputation: eugenics. British thinker Francis Galton’s bastardization of his cousin Charles Darwin’s idea of natural selection fell into favor throughout America. This biologically (and religiously) determined call for selective breeding laid the basis of Nazi Germany, though today few Americans recall how much we inspired Hitler’s pogroms.

The problem, Sexton says, is that we constantly choose to deny or overlook past grievances, which keeps us primed to commit new ones. Germany fessed up to their horrors; so did South Africa. Not so America. Sexton cites Jimmy Carter’s “malaise speech,” an oft-denounced address that was one of the most honest declarations by a U.S. president. Instead of living up to Carter’s impassioned call to action, the public chose an actor that spent eight years coddling a nation’s ego instead of holding up a mirror. 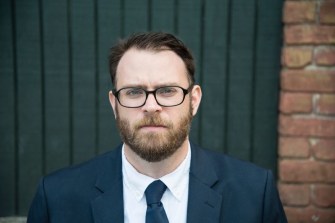 And so here we are, a failing empire foolishly gripping onto the myth of a time that we were supposedly great. In fact, Reagan asked us to make America great again; so did Bill Clinton. With this myth comes the proliferation of conspiracy theories, most notably QAnon, though dozens persist. And they all point back to the founding myth in some capacity.

“If America is so special, how are we failing right now? Within the myth is the idea that we’re being sabotaged from beyond and from within. Nationalistic conspiracy theories are what happens when a country’s mythology starts to wane.”

While critical, Sexton is not without optimism. Our failures shouldn’t not erase the incredible progress we’ve made. Right now, however, that mirror Carter tried to wield is needed. Otherwise, we could be reliving the end of the Cold War. The dismantling of the Soviet Union destroyed Russian optimism, which the government used as a wedge to attain absolute power.

Which is where America stands today: skyrocketing rates of depression and anxiety, as well as the blueprint for a new Civil War—a possibility Sexton calls a probability. Nothing new here: instead of collectively focusing our energy on the accumulation of wealth by the moneyed class, culture war issues and conspiracy theories keep us engaged in turf wars.

If you think it can’t happen here, “American Rule” is a reminder that it has, and likely will. Sexton’s advice: to achieve any sort of unity, we have to resist the urge to become apathetic. This isn’t a red or blue issue. We’re still neighbors, part of a community that stretches sea to shining sea, even if at the moment the seas are covered in smog.

And the road to healing begins with a recognition that we need to rid ourselves of the greatest myth in the history of the republic.

“Once we disabuse ourselves of the myth of American exceptionalism, and we start looking at American history and say it’s really problematic and inspirational at other times, it allows us to build something new.”

Tags
capitalismdemocracyeconomicsgovernmenthistorypolitics
In this article
capitalismdemocracyeconomicsgovernmenthistorypolitics
Related
Hard Science
200 years of exploring Antarctica
What we’ve learning from the world’s coldest, most forbidding, and most peaceful continent.
High Culture
The most controversial painting in Russian history
Created in the 1880s, “Ivan the Terrible and His Son Ivan,” which depicts a father murdering his son, divides Russians to this day.
The Past
Ceramics, corn cobs, and other strange things we used before toilet paper
Some objects were softer than others.
Neuropsych
The trouble with medicating mental illness
Has the “age of psychopharmacology” shrunk society’s sense of responsibility for mental health?
Strange Maps
The great European house cat migration
Ancient bones reveal that domesticated felines were at home in Pre-Neolithic Poland around 8,000 years ago.
Up Next
Health
Almost 300,000 guns sold without background checks as pandemic overwhelmed system
The ‘Charleston Loophole’ has likely allowed thousands of guns to end up in the hands of people who would have failed a federal background check.