A detailed analysis of environmental research has revealed the greatest threat to the world: affluence.

That’s one of the main conclusions of a team of scientists from Australia, Switzerland and the United Kingdom, who have warned that tackling overconsumption has to become a priority. Their report, titled Scientists’ Warning on Affluence, explains that true sustainability calls for significant lifestyle changes, rather than hoping that more efficient use of resources will be enough.

“We cannot rely on technology alone to solve existential environmental problems – like climate change, biodiversity loss and pollution,” writes the report’s lead author, Professor Tommy Wiedmann from Australia’s University of New South Wales Engineering, in an article on Phys.org. “We also have to change our affluent lifestyles and reduce overconsumption, in combination with structural change.” 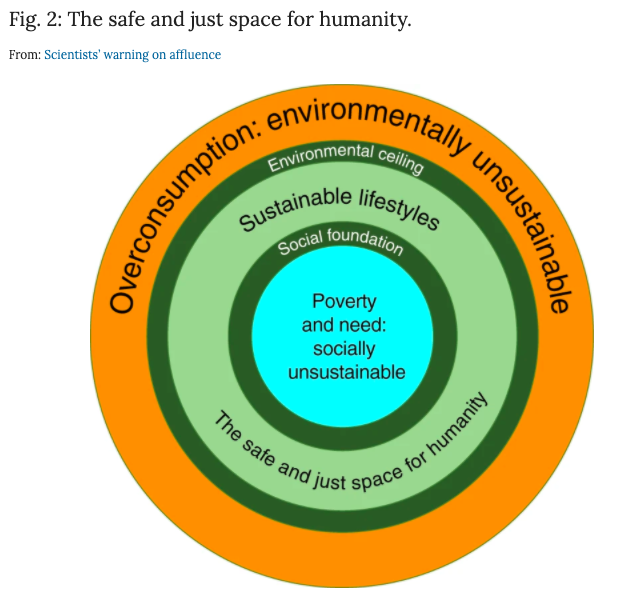 Sustainable lifestyles are situated between an upper limit or ‘environmental ceiling’ and a lower limit or ‘social foundation’. Image: Nature

There is widespread acceptance that the planet faces an ecological tipping point. “To care for humanity, we must care for nature,” said United Nations Secretary-General António Guterres on World Environment Day in June. He stressed the importance of making changes as the world recovers from the recent pandemic: ” As we work to build back better, let’s put nature where it belongs – at the heart of our decision making.”

Approximately half of global GDP is bound up in the natural world, according to the UN. In addition to the many millions of jobs dependent on nature, there are also billions of people intimately connected to and wholly reliant upon natural remedies and medicines.

Plus, the use of tree-planting and reforesting programmes could reduce the impact of global emissions and help meet the Paris Agreement target to keep global temperature increase below 1.5C.

The threat of human-made environmental harm was highlighted in the World Economic Forum’s Global Risk Report 2020, where it is in the top 10 of both the most-likely and the greatest-impact risks.

The chief problem outlined by the report is that any gains in resource efficiency and environmental protection offered by technology-based solutions have been outrun by the growth of consumption. The report also posits that it might be time to rethink traditional ideas about supply and demand

In capitalist societies, the theory goes that consumer need drives the rest of the economy – businesses will only produce things for which there is a demand. But the reality of 21st-century global capitalism is a little more complex than that – some economists argue that growth itself is the problem. 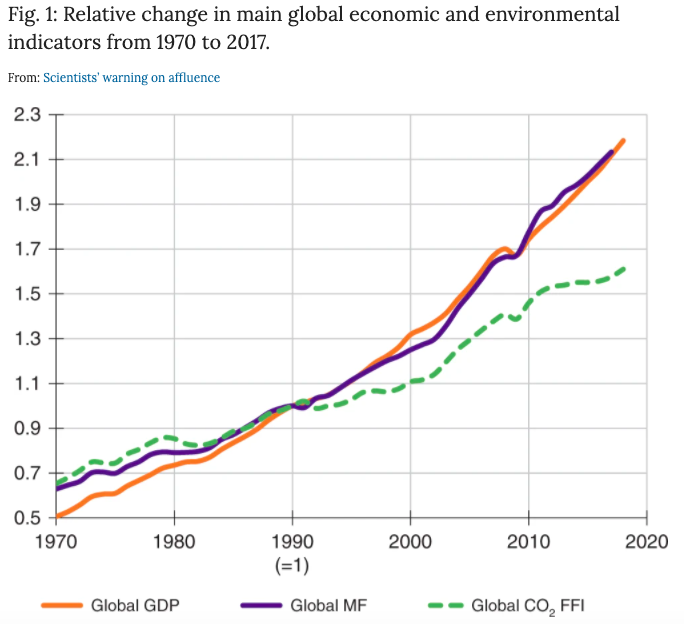 Time for a great reset

Writing shortly before World Environment Day, the Forum’s founder and executive chairman, Professor Klaus Schwab, called for a great reset of capitalism in the wake of the coronavirus pandemic. His vision of the great reset includes creating a stakeholder economy, where the market pursues fairer outcomes for all, underpinned by changes to tax, regulatory and fiscal policies, and new trade arrangements.

Schwab also calls for investments that advance shared goals, such as equality and sustainability. This is something that is already taking place in parts of the world where economic-stimulus programmes are being enacted.

In addition, Schwab urges us to address health and social challenges with the innovations made possible by the Fourth Industrial Revolution. That means more public/private collaboration in pursuit of the public good.

The pandemic has devastated families and brought major economies to a standstill. But by directing resources into new and improved systems and processes, rather than shoring up the existing ones, Schwab believes a lasting change for the better is possible.

That belief is echoed by the scientists’ report, which shows that affluence is “actually dangerous and leads to planetary-scale destruction,” says co-author Julia Steinberger, Professor of Ecological Economics at the University of Leeds. “To protect ourselves from the worsening climate crisis, we must reduce inequality and challenge the notion that riches, and those who possess them, are inherently good.”

Tags
capitalismconsumerismeconomicsglobal issuesInequalitymoney
In this article
capitalismconsumerismeconomicsglobal issuesInequalitymoney
Related
Which “money personality” are you?
Financial experts explain 4 types of money behavior.
▸
6 min
—
with
Lindsay Bryan-Podvin
3 steps to cure your money anxiety
We’re afraid to talk about money–and that costs us.
▸
7 min
—
with
Kathleen Burns Kingsbury
The mind-blowing stats on male inequality
Male inequality — the enormous cultural shift happening right under our nose.
▸
15 min
—
with
Richard Reeves
The Past
How people crossed the Atlantic Ocean before commercial aviation
For centuries, the only way to travel between the Old and New World was through ships like the RMS Lusitania. Experiences varied wildly depending on your income.
The Past
How the crusades spawned the world’s first financial services company
The Knights Templar were not only skilled fighters, but also clever bankers who played a crucial role in the development of Europe’s financial systems.
Up Next
Life
Polar bears could be extinct by 2100, says heartbreaking new study
If Arctic ice continues to melt at its projected rate, the bears will go extinct due to starvation by the end of the century according to a first-ever projected timeline.