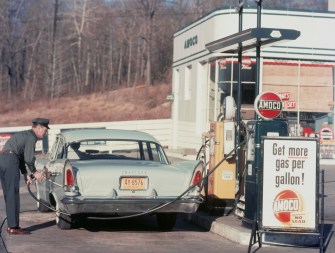 Thomas Midgely Jr. is responsible for not just one invention on this list…

It’d be hard to write this list without including Thomas Midgley, Jr., an inventor that was celebrated during his lifetime but who’s inventions have, in some estimates, killed thousands and thousands of people.

It was started under good intentions: in 1921, after working at General Motors for a few years, he discovered that the addition of tetraethyl lead (or TEL) to gasoline prevented engine knocking, which is a problem that plagued early motors. He developed a patent for it, which he called Ethyl, and filed the patent jointly with General Motors. It sold incredibly well but bore the unfortunate distinction of making anyone who worked with the gasoline—people at the plants and people who worked at early gas stations—go somewhat loopy.

Thomas himself, in 1923 (just 2 years into his comfy new role in the Ethyl production facility), got lead poisoning and took a long vacation to Miami to clear his lungs, stating “my lungs have been affected and that it is necessary to drop all work and get a large supply of fresh air”. By 1924, four people had died at a Dayton, Ohio TEL plant, and the staff was reportedly threatening to shut the plant down, citing that they were “depressed to the point of considering giving up the whole tetraethyl lead program,” as lead poisoning can cause depression. Five more workers died at a New Jersey TEL plant. In late 1924, General Motors figured these were just isolated incidents so they opened another Ethyl treatment plant, this time at the Bayway Refinery (still there!) in New Jersey. In just the first two months of operation, though, lead poisoning contributed to widespread depression, hallucinations, and five deaths.

But ol’ Thomas either couldn’t see or didn’t want to accept that his invention was causing this. So he held a press conference in October of 1924 where he took “deep inhales” of TEL for 60 seconds to proclaim it safe. Just a few days later, General Motors closed the plant and Midgley himself got another case of lead poisoning. He was fired from his job in 1925, but remained a GM employee in stature.

The deaths attributed to TEL noted above don’t take into account the dozens — if not hundreds — of additional TEL / lead poisoning cases from people who worked at gas stations, shipped gasoline, and others. So much lead was released into the atmosphere that it’s hard to measure the extent of the damage that Midgley caused. Sao Paulo cityscape showing air pollution and skyline of the

You think Thomas would have stopped his rascally ways, but his other big invention is the one that’s still affecting us in a big way today, and may be responsible for (yes, actual) millions of deaths. Specifically, he helped invented R22, or Freon, which is the first CFC ever created. CFCs are two things:

Freon was put into all kinds of things from the mid-’40s onwards, and until semi-recently was powering much of the freezers in your local supermarket. It took until 1987 for the U.S. to sign onto a worldwide accord promising the end of Freon production, and in 2020 R22 will be made illegal to own or possess entirely.

There’s no way for Midgley himself to have known this as he died in the mid 1950’s, 30 years before people understood that CFCs were destroying greenhouse gases in the ozone layer, basically “earth’s sunscreen” that protects against UV rays. A 1991 New York Times article details the staggering cost of fixing the ozone layer, while this 2009 article explains that the world as we know it could have ended in 2060 due to overwhelming heat if CFCs had never been banned. Thankfully, the ozone layer is healing itself and should be back to its pre-1974 ways (when it was first detected) by 2020.

As for Midgley, he did infact die from one of his inventions. He died from after contracting a polio-related disease which rendered him with limited mobility; he designed a very odd bed full of levers and pulleys (that allowed him to get out of bed) but died after getting stuck in it, strangling him.

Historians have said that Midgley “had more impact on the atmosphere than any other single organism in Earth’s history.” 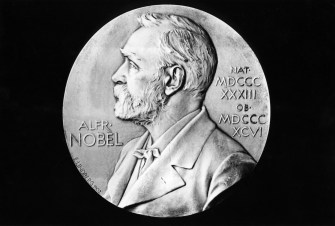 Alfred Noebl, on the Nobel Prize for Literature medal, via Getty Image

Alfred Nobel invented dynamite in 1867, after spending much of the last 20 years experimenting with (and becoming a somewhat successful in the family business relating to the production of) nitroglycerine. After his younger brother was killed in an explosion on his father’s factory, he began to explore ways of making the substance more stable, eventually soaking it in diatomaceous earth from the nearby Elbe river. The unique type of earth—made of fossilized algae—proved to be just the stuff to turn nitroglycerine into something far more transportable, and Alfred later developed a blasting cap, or detonator, to harness the ability to explode it from a fuse, which provided distance.

Big deal, right? Well, Alfred had only intended for it to be used in mining. He really didn’t foresee it as an instrument of war, and famously was quoted as saying:

“Perhaps my factories will put an end to war sooner than your congresses: on the day that two army corps can mutually annihilate each other in a second, all civilized nations will surely recoil with horror and disband their troops.”

But as anyone undoubtedly knows, dynamite (and variations of his blasting cap) were used in manners of acts of war. When his other brother died, some newspapers mistakenly thought that Aldred had died, leading one prominent French newspaper to call him the “merchant of death”. Alfred hated this, and spent the rest of his life trying to atone for his invention. Alfred Noble came to regret his hand in inventing dynamite so much so that he gave much of his fortune and estate to a foundation that awarded prizes that genuinely make the world a better place… you may have heard of the Nobel Prize. 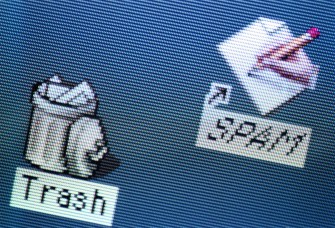 Image of internet spam going into the trash can. Fairfax Media via Getty Images

On May 1st, 1975, a 35 year old man named Gary Thuerk, working a sales job at Digital Equipment Corporation, sent out a message to several hundred people on ARPANET (Advanced Research Projects Agency Network), which would eventually become the groundwork technology for the internet. He was the first person to send out an unsolicited sales email and thus became the grandaddy of modern email spam. Gary was widely ridiculed for his efforts at the time, mostly because he also managed to publish every recipient’s email address within the email, thus blasting a large text file (keep in mind how little computers stored at the time) to several dozen email accounts, thereby clogging up the service. You can see the email itself in full, as well as the replies, right here.

USENET spam sprang up in the early 1990s, and spam really ramped up around 1997 when bots could be built to fire off thousands of emails an hour. A highly-cited academic paper from 2012 says:

“Every day about 100 billion emails are sent to email addresses around the world. In 2010 an estimated 88 percent of this worldwide traffic was spam.”

That 2012 study estimates that spam costs the world between $20 billion and $50 billion a year in lost productivity (time spent deleting, and spam filter costs), and states that the actual money that spam brings in is about $200 million a year, a 100 to 1 return. Phishing, in effect an offshoot of spam, costs American businesses a huge amount of money a year and was even a major factor in the 2016 American presidential election.

As for Gary, he bills himself as “the father of eSpam” and until recently used to regularly appear at tech conventions. He’s still quite proud of what he did, saying in a 2004 interview:

“I am kind of like the Wright brothers, flying the first airplane. It was a long time before people took a commercial flight. I sent out the first mass email in 1978 and it wasn’t until 10 or 15 years later that people realized they can send advertising over email for cheap.”.

Spam, for what it’s worth, actually gets its name not from the curiously versatile meat product, but from a Monty Python sketch wherein regular conversations are drowned out by Vikings singing “spam, spam, spam, spammity spam.” 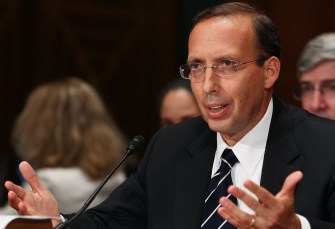 Lewis Ranieri and Laurence D. Fink had an idea: if you pooled mortgages together, you could slice the big, um, “mortgage pizza” (forgive me) up and sell each piece of it as a package. That way, much larger companies could own pieces of the American housing market, which itself is propped up by speculative home loans. And while those last two sentences might be cramming two decades of very confusing financial securities information into them, they at least highlight the problem—what happens when people stop paying their mortgage? In 2008, we all found out.

From 1998, when J.P. Morgan presented insurance magnate AIG with a new scheme called credit default swaps (CDS), until 2008 when the market crashed because them, Wall Street was using CDOs and CDSs as a way to make quick and easy money, as what CDOS and CDSs are supposed to do is keep large amounts of debt out of any one particular industry, as the debt is bundled together. But when lenders start handing out money to people who can’t pay it back, the market falls apart.

Wall Street sold debts packages as a way to make more money. Because banks were hungry to get more mortgage money in the debt pool, they began to give AAA (read: junk) loans out to just about anybody. Homeowners were encouraged via a slew of advertising from 2004-2008 to re-finance their homes through new mortgages, through companies like Countrywide. This created a housing boom, where property values soared thanks hugely to the fact that banks were printing themselves money in the forms of CDOs.

So while Lewis and Laurence “invented” them… it took someone else, the man in the picture above, to turn them into something far bigger and far worse than anyone had intended.

Much of this monsterization of CDOs and CDSs was thanks in large part thanks to Joseph Cassano, an executive at AIG, who has been called the “patient zero” of the Great Recession. While Cassano didn’t invent CDOs or CDSs, he certainly helped popularize them. AIG, under his guidance, sold about $100 billion of them. Because so much of what they were selling were bad loans, in late 2008 AIG’s credit was downgraded and they were suddenly on the hook for $100 billion. AIG, and about 11 other financial giants, were bailed out using taxpayer money.

This affected the global economy in such a way that we’re still feeling the effects. Housing prices remain high while wages have stagnated, banks have returned to their predatory lending ways, and to make things worse? There’s a similar debt-bubble happening right now with CDOs and student loans.

Vanadium dioxide is a strange material that “remembers” information and when it was stored. This is akin to biological memory.
The Present

In the future, driving an app across a bridge could let engineers know how safe it is.
Up Next
The Present

Amazon chooses New York and Virginia for its HQ2

The new offices will be built in New York’s Long Island City and Viriginia’s Arlington.