If we don’t understand the mistakes from our history, we may be doomed to repeat them. But what if we could use science to not only better understand our past, but also make predictions about our future?

One scientist’s research suggests that may be possible.

In 2012, Peter Turchin published a study in the Journal of Peace Research that offered an ominous prediction: The U.S will suffer a “peak” of instability in 2020. Today, that prediction seems to have been spot on. The nation is suffering from a deadly pandemic, social unrest over police brutality, and the reliably chaotic state of Trump-era politics.

But how did Turchin get it right?

As a mathematician and evolutionary biologist, Turchin is a key figure in a young and controversial field called cliodynamics. (The name comes from “Clio,” who was the muse of history in Greek mythology.) This multidisciplinary area of research examines history through a quantitative approach, essentially treating history as science.

Cliodynamics practitioners often take advantage of newly digitized historical information, creating and testing mathematical models that aim to explain big questions about the past, like why do empires rise and fall? In blunter terms, the goal is to show that “history is not ‘just one damn thing after another,” as Turchin told Nature. Here’s how Turchin described cliodynamics in an article published in The Conversation:

“…the adherents of cliodynamics treat historical record just as, say, evolutionary biologists treat the palaeontological record. Theories are constructed and based on general principles and tested empirically with comprehensive databases. In short, we use the standard scientific method that worked so well in physics, biology, and many social sciences.”

In his 2012 study, Turchin examined the history of sociopolitical instability in the U.S. from 1780 to 2010. To do this, he used data on about 1,600 violent political incidents from American history, such as lynchings, riots, and terrorism.

He combined that data with a model that factored in broader societal forces, such as falling wages, wealth inequality, changes in population, and increased competition for elite jobs.

The results revealed that American political violence tends to occur in regular cycles, with valleys of peace punctuated by peaks of violence and unrest. 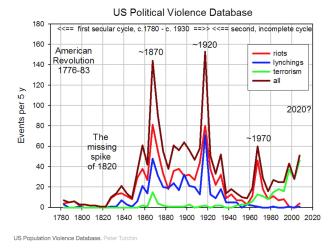 One is a short cycle that occurs about every 50 years, with peaks in 1870, 1920 and 1970. Turchin calls this oscillation the “father-son” cycle: the father perceives a social injustice and revolts, while the son’s generation deals with the aftermath and abstains from revolution. Then, the third generation repeats the cycle.

The second cycle is much longer, peaking once every two to three centuries. The cycle begins with a society that’s roughly egalitarian, but over time its population increases, labor supply outpaces demand, and wealth inequality becomes increasingly intolerable. Eventually, societies tend to collapse or suffer widespread political instability.

Turchin’s model is based on structural-demographic theory, which seeks to understand the broad underlying forces that cause societies to become unstable. The theory has revealed that regular cycles of political instability have occurred not only in the U.S., but also in the Roman Empire, Egypt, China, and Russia.

To better understand the theory, try thinking about the causes of revolutions as being similar to the tectonic processes that cause earthquakes, as Turchin and economic historian Andrey Korotayev wrote in a 2020 paper:

“In both revolutions and earthquakes it is useful to distinguish ‘pressures’ (structural conditions, which build up slowly) from ‘triggers’ (sudden releasing events, which immediately precede a social or geological eruption). Specific triggers of political upheavals are difficult, perhaps even impossible to predict.

On the other hand, structural pressures build up slowly and more predictably, and are amenable to analysis and forecasting. Furthermore, many triggering events themselves are ultimately caused by pent-up social pressures that seek an outlet—in other words, by the structural factors.” 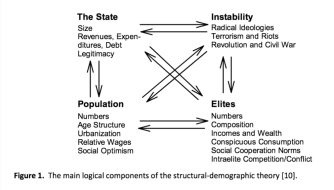 Turchin’s model found that violent political outbursts in the U.S. tend to peak when these types of structural factors are stressed in specific ways. Turchin noted three key drivers of instability that, like deadwood waiting for a forest fire, have been building up over the past several decades: wealth inequality, increased competition for elite jobs, and rising national debt.

“…each [of these factors] did not develop in isolation; they are actually interconnected at a fundamental level. Moreover, our historical research shows that this combination of trends is typical of historical societies that are in the pre-crisis phase.”

So, while the U.S. is going through a tense period, it may only be just the beginning of a larger crisis. Turchin even told Time that it’s possible that tensions “may escalate all the way to a civil war.”

But collapse isn’t inevitable. As researchers continue to develop a deeper understanding of the underlying forces that drive political instability, society is in a unique position to pull back from the brink, as Turchin wrote in an article for Aeon:

“Ours is the first society that can perceive how those forces operate, even if dimly. This means that we can avoid the worst — perhaps by switching to a less harrowing track, perhaps by redesigning the rollercoaster altogether.”

Research shows that those who spend more time speaking tend to emerge as the leaders of groups, regardless of their intelligence.
Up Next
Health

The politicalization of mask-wearing doesn’t help stop the spread of infections.