Learning about ancient animals is difficult. Fossilization is a rare event, possible only under very limited conditions. Preservation inside amber resin, as depicted in the film Jurassic Park, is also rare, particularly for species from before 140 million years ago.

Now, in an amazing find, a group of paleontologists has discovered a previously unknown species of insect in the fossilized excrement of a Triassic era dinosaur. Their findings have been published inCurrent Biology. 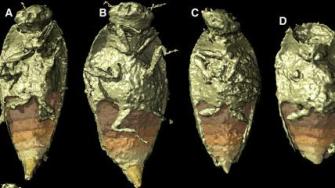 Coprolites are fossilized dung, and they are often an excellent source of information on the life and diet of ancient animals. Like other kinds of fossils, they are rare.

The coprolites described in this study were found in Poland and contained nearly complete casts (including legs and antennae) of a previously unknown species, dubbed Triamyxa coprolithica by the researchers. A kind of beetle, the insect is a member of a new family, Triamyxidae. The small size and sclerotized bodies of the insects likely protected them from the digestive system of the dinosaur that ate them, allowing us to learn about it today.

The find has excited the paleontologists, who have gone so far as to suggest that coprolites could be the “new amber” when it comes to learning about Mesozoic insects. Study co-author Martin Fikáček of National Sun Yat-sen University in Taiwan explained the possibilities toScimex:

“We didn’t know how insects looked in the Triassic period and now we have the chance. Maybe, when many more coprolites are analyzed, we will find that some groups of reptiles produced coprolites that are not really useful, while others have coprolites full of nicely preserved insects that we can study. We simply need to start looking inside coprolites to get at least some idea.”

They went on to say:

“In that aspect, our discovery is very promising. It basically tells people, ‘Hey, check more coprolites using microCT; there is a good chance to find insects in it. And if you find it, it can be really nicely preserved.'”

Importantly, unlike amber deposits, fossilized dinosaur dung can be much older than 140 million years. This sample is estimated to be at least 230 million years old.

The dinosaur responsible for this find

The researchers have credited the find to Silesaurus opolensis, a species of dinosaur known to live in that part of Poland. It could grow to about two meters long and was likely an agile creature with an excellent field of vision and a keratinous beak. This find adds to previousstudies that suggested thatSilesaurus was an omnivore rather than an herbivore.

It’s Time To Retire The Super-Earth, The Most Unsupported Idea In Exoplanets

This artist’s impression of the Nu2 Lupi planetary system shows three exoplanets. These planets, discovered by the ESA’s CHEOPS mission, range from approximately the size of Earth to about 2.5 […]