About 359 million years ago, at the end of the last phase of the Devonian period, there was a mass extinction event or series of events. An estimated 70 to 80 percent of the creatures living in the Earth’s coral reefs during the so-called “age of fish” were wiped out.

There are theories about what happened, from volcanic activity, to predatory plants run amuck (!), to an asteroid impact similar to the one believed to have killed off the planet’s large dinosaurs, but no clear cause has been confirmed.

A study published in the Proceedings of the National Academy of Sciences from the University of Illinois Urbana-Champaign published in August proposes a more distant trigger: A supernova 65 light-years away in space destroyed the Earth’s ozone layer.

The researchers say that a supernova would be capable of damaging the ozone layer for as long as 100,000 years.

In the same way that humankind has learned over the past century that events in one place often affect another, says lead study author astrophysicist Brian Fields:

“The overarching message of our study is that life on Earth does not exist in isolation. We are citizens of a larger cosmos, and the cosmos intervenes in our lives — often imperceptibly, but sometimes ferociously.”

Thousands of generations of sunburnt plants 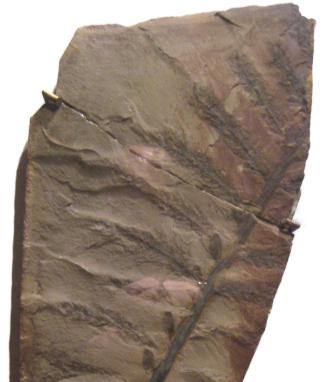 Among the plants growing during the late Devonian were Archaeopteris hibernicaCredit: Wikimedia Commons

Fields and his colleagues arrived at their conclusion as they sought to explain an abundance of sunburnt plant spores, thousands of generations of them, located at the geologic boundary between the Devonian and Carboniferous periods. To the researchers, they indicate an extended period of ozone depletion in the Earth’s atmosphere. (While terrestrial plants and insects weren’t as decimated as sea organisms during the extinction, they were nonetheless subjected to whatever it was that happened.)

Fields says there’s scant evidence of a local culprit such as volcanic activity. His team also ruled out dramatic events such as meteorites, solar storms, or gamma-ray bursts. As grad student co-author Jesse Miller explains, “These events end quickly and are unlikely to cause the long-lasting ozone depletion that happened at the end of the Devonian period.”

“Instead,” says Fields, “we propose that one or more supernova explosions, about 65 light-years away from Earth, could have been responsible for the protracted loss of ozone.”

Such a flash of light would be both spectacular to witness and deadly. The researchers say that a supernova would be capable of damaging the ozone layer for as long as 100,000 years. Such an event would constitute a “one-two punch.” It would begin with a barrage of destructive ultraviolet rays, X-rays, and gamma rays. This would be followed by a longer-term increase in cosmic rays striking the Earth as a result of blast debris colliding with surrounding gases and driving increased particle acceleration.

Considering that there was apparently a 300,000-year decline in biodiversity before the massive die-off, the team suggests that the Earth may even have been affected by a series of supernova explosions instead of just one.

“This is entirely possible,” says Miller. “Massive stars usually occur in clusters with other massive stars, and other supernovae are likely to occur soon after the first explosion.”

A “smoking gun” for the supernova hypothesis

The only way to verify the theory put forth by Fields’ team would be to find a particular pair of radioactive isotopes—plutonium-244 and samarium-146—in the geologic record for the time frame in question.

Undergraduate co-author Zhenghai Liu explains, “Neither of these isotopes occurs naturally on Earth today, and the only way they can get here is via cosmic explosions.”

The search for the isotopes has yet to begin.

Meanwhile, there’s little reason to worry about future supernovae doing to us what those earlier ones may have done to the Earth’s coral reefs, science fiction notwithstanding. Says another co-author, grad student Adrienne Ertel, “To put this into perspective, one of the closest supernova threats today is from the star Betelgeuse, which is over 600 light-years away.”

Was our distant ancestor a biped or not – i.e., human or not human?
The Past

Ancient frogs in mass grave died from too much sex

Sex can be a death trap even for modern toad and frog species.
The Past

Horses pranced around the western hemisphere until they went extinct in the late Holocene. They were reintroduced by European colonists — though where, when, and how has remained unclear.
Up Next
The Present

Fifty years of research on children’s toy preferences shows that kids generally prefer toys oriented toward their own gender.