This article was first published on Big Think in April 2021. It was updated in November 2022.

Artists of all types have been known to ingest a — shall we say — creative lubricant or two. One of the paradoxical things about art, even for people who love making it — maybe especially for those people — is that it’s sometimes hard to get started, despite the fact that it’s even harder to stop.

A new paper suggests this problem and solution go way back.

As archaeologist Yafit Kedar from Tel-Aviv University in Israel was in France enjoying some cave art deep within the ground, she started to wonder why their creators would choose to create images so far away from natural light sources. These places are also airless, where what little oxygen there could have been would have been consumed by the burning torches the painters needed in order to see what they were painting.

Maybe, she thought, the reason these long-ago artists chose to create in such remote chambers was because of their lack of fresh oxygen. Perhaps the painters would have been down there creating in a hypoxic, trancelike state. In that pre-agricultural, pre-chemistry time, cave painting might have been a way to get inspirationally baked.

There are some 400 known prehistoric cave paintings found in Western Europe dating back to the Upper Paleolithic period from 40,000 to 11,00 years ago.

The Greek oracles were probably high, too 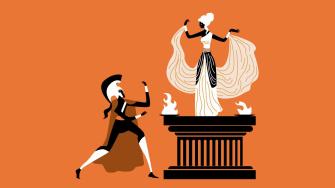 This might not be the only historical example of people inducing an oxygen-starved state to achieve transcendence or something like it. A 2006 study from scientists at the National Institute of Geophysics and Volcanology in Rome hypothesized that hypoxia might have been the source of the trances out of which Delphic oracles extracted their visions.

Plutarch had written that trances began when the oracle—really generations of female oracles, all of them ceremonially named “Pythia” — inhaled sweet noxious fumes from cracks in the ground beneath the temple. Lead author of the 2006 study Giuseppe Etiope suggested that these gasses may well have been nothing more miraculous than carbon dioxide and methane filling a poorly ventilated space, thus casting Pythia off into a netherworld of semi-consciousness.

The air down there 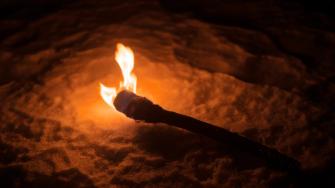 On the surface, the air we breathe is 21 percent oxygen. Kedar and her colleagues created computer models that revealed the likely levels of oxygen in the painted caves. They found that in some such caverns, oxygen levels can drop to 18 percent in just 15 minutes. Some models fell to 11 percent. Hypoxia is likely at oxygen levels below 14.5% percent.

Fire torches exacerbate the problem. Up near the surface in a cave open to outside air, a burning fire’s exhaust flows up and out while fresh air comes in beneath it. In a narrow passageway, however, the carbon dioxide and oxygen mix, and the lighter oxygen floats upward and on out of the cavern toward the surface.

The deeper a painter went with their torch, the more extreme was the loss of oxygen. Some of Kedar’s models of deep caverns found just 9 percent oxygen, the lower limit of survivability.

Kedar hopes to validate the modeled outcomes by measuring oxygen levels in existing painted caves. For now though, the models point to the “transformative nature of an underground, oxygen-depleted space.”

Hypoxia releases dopamine and can produce euphoria, visions, and out-of-body sensations. Modern visitors have reported experiencing some of these same sorts of mental phenomena when viewing the artwork.

The paper suggests that, “The cave environment was conceived as both a liminal space and an ontological arena, allowing early humans to maintain their connectedness with the cosmos.” The hypoxic mind may well have found it easy to imagine that they were seeing beyond the rock, and indeed, beyond their world.

“The images envisioned in such a hallucinatory state appear to float on the cave surfaces (walls, floors, and ceilings) as if these constituted a membrane connecting the upper and lower worlds,” write the authors.

Considering the likelihood of hypoxic conditions inside caves, it may be that it was the promise of a transcendent experience that drove the painters deep into the ground rather than any inherent meaning attached to the caves. As the paper concludes:

“It was not the decoration that rendered the caves significant; rather, the significance of the chosen caves was the reason for their decoration.”

Tags
archaeologyarthistory
In this article
archaeologyarthistory
Related
Hard Science
200 years of exploring Antarctica
What we’ve learning from the world’s coldest, most forbidding, and most peaceful continent.
High Culture
The most controversial painting in Russian history
Created in the 1880s, “Ivan the Terrible and His Son Ivan,” which depicts a father murdering his son, divides Russians to this day.
The Past
Ceramics, corn cobs, and other strange things we used before toilet paper
Some objects were softer than others.
Neuropsych
The trouble with medicating mental illness
Has the “age of psychopharmacology” shrunk society’s sense of responsibility for mental health?
Strange Maps
The great European house cat migration
Ancient bones reveal that domesticated felines were at home in Pre-Neolithic Poland around 8,000 years ago.
Up Next
The Future
Gallium: The liquid metal that could transform soft electronics
Bend it. Stretch it. Use it to conduct electricity.