Trying to learn about the distant past is often difficult. The remains of ancient humans can sometimes seem baffling, and trying to determine how they ended up in strange places or why they have such odd items with them in their graves can drive archaeologists batty. But when a confusing case suddenly begins to make sense, it shines a light on a small part of human history that would otherwise be lost to the ages.

Such a discovery is described in a new paper published inJournal of Archaeological Science: Reports. It examines the death of a man living in what is now Okayama Prefecture in southern Japan 3000 years ago. It is also the earliest known case of our species having a run-in with sharks. 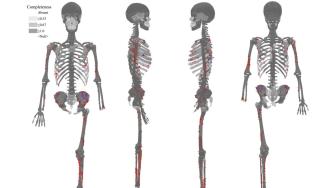 A multi-angle map of the injuries and completeness of the skeleton. Red points are bite marks, orange ones are overlapping striations, and the purple are fracture lines. White et al.

The remains of the unfortunate person, known as individual 24, were found as part of a larger excavation of the remains of ancient hunter-gatherers in the Tsukumo Shell-mound cemetery site. The skeletal remains are incomplete, and a close inspection reveals no fewer than 790 deep wounds to the bones. They show no signs of having healed but do appear to have been inflicted before death.

The researchers were initially baffled by this. After ruling out a number of possibilities, including that the man was attacked with contemporary weapons or by a land-based animal, they arrived at the notion that he was attacked by a shark. Given the area, it was likely a tiger shark or a white shark.

The likely location of the initial bite, the pattern of bite marks, and the serrated nature of the wounds all support the shark attack hypothesis. His missing left hand is also consistent with a shark attack, and the authors speculate that it was removed while he tried to defend himself. The researchers posit that the man was alive when attacked and died quickly from blood loss and shock. His remains suggest that his body was recovered by his compatriots quickly and was buried in the manner typical of the Jōmon period.

Using updated techniques, the researchers also were able to more precisely date the remains to sometime between 1370 and 1010 BCE. This would make individual 24 a member of a fisher-hunter-gatherer community, likely explaining why he was in the water in the first place.

Does this change our understanding of history?

In apress release, study co-authorDr. Mark Hudson put the findings in the context of our understanding of ancient Japan and archaeology in general:

“The Neolithic people of Jomon Japan exploited a range of marine resources… It’s not clear if Tsukumo 24 was deliberately targeting sharks or if the shark was attracted by blood or bait from other fish. Either way, this find not only provides a new perspective on ancient Japan, but is also a rare example of archaeologists being able to reconstruct a dramatic episode in the life of a prehistoric community.”

All of these conflicts have a long history. They may also have a long future.
Politics & Current Affairs

From the Notre Dame to Buddhist statues, dozens of irreplaceable artifacts are destroyed every year by both man and nature.

Aristotle’s guide to the elderly and ancient Greek wisdom

The wise, the old, and the experienced matter to a full and happy life.