Cato and the Kochs 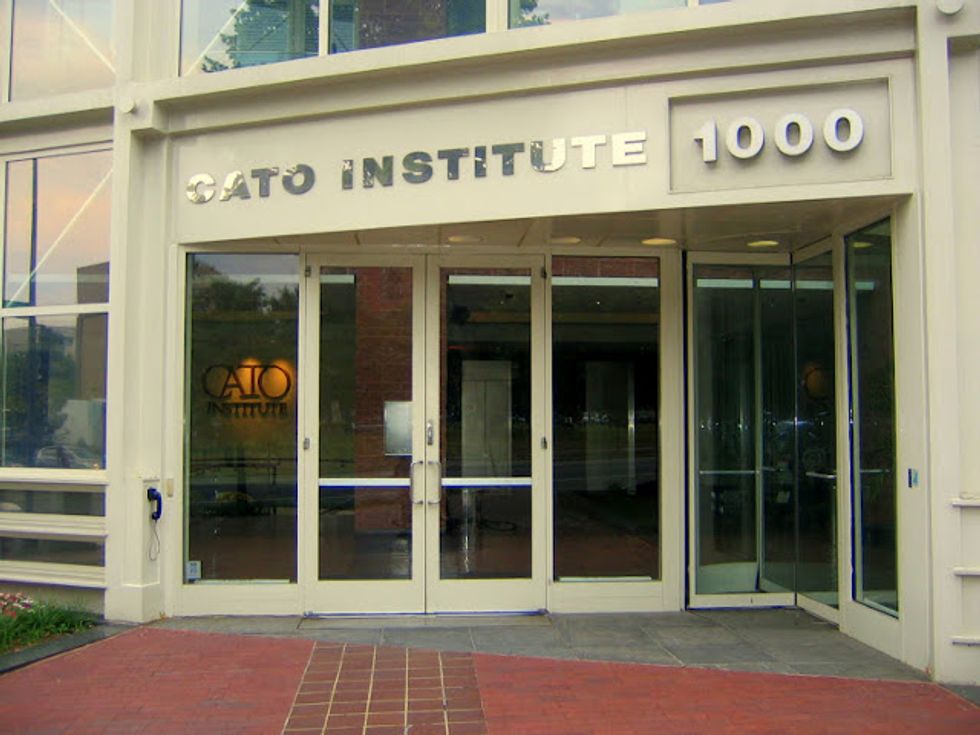 I used to work at Cato, so lot of people have asked me about the ongoing battle for control of the institute. Here's what I think. What I think is that so far the rhetoric around the controversy illustrates Tyler Cowen's dumbifying principle:  "Just imagine yourself pressing a button every time you tell the good vs. evil story, and by pressing that button you're lowering your IQ by ten points or more." I don't think Ed Crane and the Cato incumbents are especially good. I don't think the Kochs are especially evil.

It seems clear enough that the Kochs are trying to take over by stacking the board. I have no idea what they're up to, but judging from their board nominees and appointees, it doesn't look at all good. On the other hand, the hand-wringing over the new Koch-nominated board members--Ted Olson, Andrew Napolitano, Nancy Pfotenhauer, and Kevin Gentry--strikes me as overwrought. It's worth noting that David Koch has been on the Cato board for years, the whole time I was employed there and more, and I don't remember anyone once suggesting he was an ideological or strategic danger to Cato's mission. But suddenly he's an existential threat! Cato and Cato's chairman Bob Levy didn't seem to have a huge problem with Ted Olson, a Solicitor General under G.W. Bush, when he was at Cato arguing for gay marriage on constitutional grounds. Andrew Napolitano is a stout libertarian who put a ton of Cato guys on Freedom Watch, his recently cancelled show on Fox Business. Cato executive VP David Boaz seems to get along pretty well, ideologically and otherwise, with Napolitano in this recent clip. Nancy Pfotenhauer, a former G.W. Bush and John McCain campaign operative, strikes me as a classic right-leaning fusionist, of which there are not a few at Cato. That she was married for a while to Cato senior fellow Dan Mitchell I think suggests that she does not inhabit an ideological/institutional universe foreign to Cato, as does the fact that the Independent Women's Forum, of which Pfotenhauer was for years the president, is currently run by Cato alum Carrie Lukas. Kevin Gentry is a hard-core Virginia Republican Party operative with whom I worked back when I was at the Institute for Humane Studies and the Mercatus Center. He's a fundraiser.

And, hey, what about IHS and Mercatus?  I'll get to that in a second. One more thing about the board. The new members, except maybe for Napolitano, are indeed both Koch and GOP operatives. They certainly represent a bid for control. And they displaced several of Cato's most generous and involved long-time donors. I can understand why the current management is outraged. My point is that the new board members' brand of odious right-fusionist politics isn't obviously incompatible with Cato's mission, or significantly different from David Koch's.

The way Cato has so eagerly jumped on the Koch-bashing bandwagon in its hour of crisis strikes me as both transparently opportunistic and damaging to the broader libertarian movement. Charles Koch is the chairman of the board at the Institute for Humane Studies which as far as I can see has not become a whit less libertarian in orientation over the past several years. When I worked there, Charles Koch was also chairman of the Mercatus Center's board and he's on the board currently (but I can't tell from the Mercatus website who the chair is, if they have one.) A number of Mercatus' policy staff once worked at Cato and they don't seem to have changed their ideological orientation at all. Is Cato's management now arguing that Mercatus' scholars labor under a cloud of partisanship which threatens the independence and integrity of their work? Is Cato's management arguing that IHS's libertarian principles are now suddenly threatened by Charles Koch's money and leadership? Cato has worked closely with IHS for decades, and has long been a proud host each summer of a number of IHS Charles G. Koch Summer Fellows. Cato's worries about Charles Koch's baleful un-libertarian influence are completely new to me! That CGK is a partisan threat to an independent libertarian perspective is now a very popular idea at Cato that coincides exactly and suspiciously with the onset of CGK's attempt to capture control of the institution he co-founded. If David Koch is such a danger, why wasn't he one last year? As John Stossel used to say, "Gimme a break!"

I like the old Cato board members more than the new Cato board members. And I do suspect that a Koch-controlled Cato would work more closely with the Republican Party, which I don't at all like. Yet I've seen very little evidence that a Koch-controlled Cato would look a lot different ideologically than Cato does currently. However, there's every reason to believe that most of the current management would be pushed out of a Koch-controlled Cato, which I suspect is really the current management's biggest worry. The argument that widespread knowledge of actual Koch control would delegitimize Cato's work seems to me quite weak. The facts that Charles Koch co-founded Cato and that David Koch has been on the board for years and years was more than proof enough for anyone inclined to write off Cato as a Koch-run organ of the oligarchy before the coup attempt. Should the Kochs succeed, nothing much will change in this regard. The right way to look at the PR question is that the takeover attempt is temporarily a huge PR win for Cato, scored at the expense of other Koch-affiliated institutions. If Crane and Co. succesfully thwart the takeover, they'll be able to enjoy the PR boost for a good while longer.

The argument that Koch control of Cato would threaten the intellectual independence of Cato scholars also seems weak to me. This is in part because I don't know of any such problem at Mercatus, the most closely analogous Kochtopus institution, and in part because I doubt that the intellectual independence of Cato scholars is among the current management's main priorities.

All that said, I think it's better for libertarians if some prominent libertarian institutions remain outside the Kochtopus and that Julian Sanchez's presignation letter doesn't kick into effect. Still, this isn't a battle between good and evil, and the stakes are probably lower than you think. Of course, nobody likes to be on the wrong side of creative destruction's wrecking ball, but it can be indispensable and revitalizing, even for ideological movements.

Picture courtesy of the author.