Underwater robots are useful for examining objects in the deep sea, from shipwrecks to new lifeforms. But they suffer from some limitations. For instance, they tend to go one speed, and their operators have to plonk them in the water near the desired location. Diver propulsion vehicles — basically, underwater scooters — are fast, but they would zoom right by something that warranted a better look.

What is needed is an underwater robot that can zip through the water to a remote location and then slow down for a closer examination. This is harder than it might seem.

However, researchers at the University of Virginia have figured out how to make a robotic craft that does just that by mimicking the rigidity of a fish’s tail and discovering and applying a beautifully simple mathematical formula. The result is a robot that is nearly as good as a fish at speeding up and slowing down. Their work is published inScience Robotics.

A fishy riddle is solved 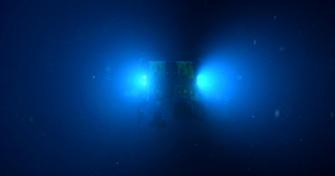 “Having one tail stiffness is like having one gear ratio on a bike,” says co-author Dan Quinn. “You’d only be efficient at one speed. It would be like biking through San Francisco with a fixed-gear bike; you’d be exhausted after just a few blocks.”

Quinn and his colleague Qiang Zhong say that it is assumed that fish alter the rigidity of their tails to meet their varying need for speed. Unfortunately, this is difficult to confirm or measure as a fish swims, so the requisite rigidity required for efficient travel at different speeds was unknown. So, Quinn and Zhong combined fluid dynamics and biomechanics to develop a model that could provide an answer and, as Zhong says, “uncover the long-existing mystery about how tail stiffness affects swimming performance.”

The solution to the puzzle was unexpectedly elegant. “Surprisingly,” Quinn revealed, “a simple result came out of all the math: Stiffness should increase with swimming speed squared.”

A tuna takes a test 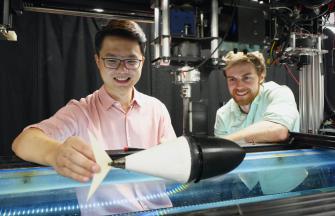 Zhong, Quinn, and their tuna robotCredit: University of Virginia

To test their findings, the pair built a tuna-like submersible robot with a programmable artificial tendon with which its tail stiffness could be tuned for different speeds as it moved through a test water channel. “What happened,” recalls Quinn, “is that suddenly our robot could swim over a wider range of speeds while using almost half as much energy as the same robot with a fixed-stiffness tail. The improvement was really quite remarkable.”

Zhong credits their multidisciplinary approach, saying, “We are not just focused on theory analysis, but also on proposing a practical guide for tunable stiffness. Our proposed tunable stiffness strategy has proved effective in realistic swimming missions, where a robot fish achieved high speed and high efficiency swimming simultaneously.”

Having demonstrated their theory with their tunable tuna, they are interested in transplanting their tail technology to aquatic robot creatures ranging in size from tadpoles to dolphins. “I don’t think we’ll run out of projects any time soon,” says Quinn. “Every aquatic animal we’ve looked at has given us new ideas about how to build better swimming robots. And there are plenty more fish in the sea.”

The duo are currently developing an undulating robot based on stingrays.

Find your wallet or keys — or a nuclear submarine.
The Past

Flexible organic circuits might someday hook right into your head.
Up Next
High Culture

The most famous popular science book ever written

Why I was prepared to hate The Structure of Scientific Revolutions but ended up loving it.