A neural network was able to rediscover one of the most important paradigm shifts in scientific history: Earth and other planets revolve around the Sun. The accomplishment suggests machine-learning techniques could someday help to reveal new laws of physics, maybe even within the complex realm of quantum mechanics.

The results are set to appear in the journal Physical Review Letters, according toNature.

The neural network — a machine-learning algorithm called SciNet — was shown measurements of how the Sun and Mars appear from Earth against the fixed-star background of the night sky. SciNet’s task, assigned by a team of scientists at the Swiss Federal Institute of Technology, was to predict where the Sun and Mars would be at future points in time.

In the process, SciNet generated formulas that place the Sun at the center of our solar system. Remarkably, SciNet accomplished this in a way similar to how astronomer Nicolaus Copernicus discovered heliocentricity.

“In the 16th century, Copernicus measured the angles between a distant fixed star and several planets and celestial bodies and hypothesized that the Sun, and not the Earth, is in the centre of our solar system and that the planets move around the Sun on simple orbits,” the team wrote in a paper published on the preprint repository arXiv. “This explains the complicated orbits as seen from Earth.”

The team “encouraged” SciNet to come up with ways to predict the movements of the Sun and Mars in the simplest way possible. To do that, SciNet passes information back and forth between two sub-networks. One network “learns” from data, and the other uses that knowledge to make predictions and test their accuracy. These networks are connected to each other by only a few links, so when they communicate, information is compressed, resulting in “simpler” representations. 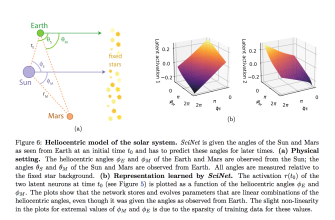 SciNet decided that the simplest way to predict the movements of celestial bodies was through a model that places the Sun at the center of our solar system. So, the neural network didn’t necessarily “discover” heliocentricity, but rather described it through mathematics that humans can interpret.

In 2017, data scientist Brenden Lake and his colleagues wrote a paper describing what it will take to build machines that learn and think like people. One benchmark for doing so would be artificial intelligence that can describe the physical world. At the time, they said it “remains to be seen” whether “deep networks trained on physics-related data” could discover laws of physics on their own. In a narrow sense, SciNet passes this test.

“To summarize, the main aim of this work is to show that neural networks can be used to discover physical concepts without any prior knowledge,” the SciNet team wrote. “To achieve this goal, we introduced a neural network architecture that models the physical reasoning process. The examples illustrate that this architecture allows us to extract physically relevant data from experiments, without imposing further knowledge about physics or mathematics.”

Tags
aiastronomymachine learning
In this article
aiastronomymachine learning
Related
The Present
Even in the age of AI, some problems are just too difficult for computers
Computers are growing more powerful and more capable, but everything has limits
13.8
What kind of intelligence is artificial intelligence?
The initial goal of AI was to create machines that think like humans. But that is not what happened at all.
Life
How artificial intelligence is helping us decode animal languages
Communication among cetaceans, like whales and dolphins, looks especially promising.
Thinking
Killer robots and the banality of evil
“Lethal autonomous weapon” sounds friendlier than “killer robot.”
The Future
The brief history of artificial intelligence: The world has changed fast – what might be next?
Despite their brief history, computers and AI have fundamentally changed what we see, what we know, and what we do.
Up Next
Starts With A Bang
The Science Of Why 5G Is (Almost) Certainly Safe For Humans
Many people, including some scientists, fear that the coming 5G WiFi revolution will harm humans. Here’s why that’s unfounded.Over the coming few years, a new set of infrastructure will be […]