Halloween is a holiday that’s celebrated every year on October 31st. While its tradition in the United States is felt everywhere, from horror films in our cinemas, weekend house-party revelers and kids trick or treating in the streets, the celebrations don’t stop here. Halloween draws from a number of festive fall holidays throughout the millennia.

It originally came from the ancient Celtic festival of Samhain. Later, in the eighth century, Catholic Pope Gregory III decided to call November 1st All Saints Day. Over time, the two disparate holidays began to coalesce and the foundations of Halloween began to form. The evening before November 1st became known as All Hallow’s Eve.

Over time, Halloween activities evolved into what we know today. But it took a long time to get there. 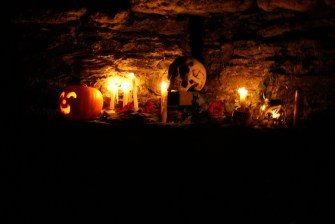 Halloween: A mix of ancient traditions

In Celtic tradition, Samhain marked the day that summer was coming to a complete close. The harvest was ending and the throngs of winter were near. The shadowy winter was a time associated with death followed by eventual renewal. Celts believed that this was the night where the veil between the living and the dead was lifted and the spectral past returned to the Earth.

At the time, Druids (Celtic priests) would use Samhain to make prophecies about the future to help guide their community. They would begin to light massive bonfires where they burned crops and animals as sacrifices to their gods. During this celebration, the druids would dress up in animal heads and skins, dance around the fire and tell fortunes and stories.

It was the early first century when the Roman Empire had managed to conquer most of the Celtic territory. During this centuries-long rule, a few Roman fall festivals combined with Samhain. Romans also celebrated the dead through a holiday called Feralia. Throughout the years, this eventually blended with the holiday of Samhain. The next Roman festivity that influenced Halloween was one that honored Pomona, the Roman goddess of fruit and vegetation. 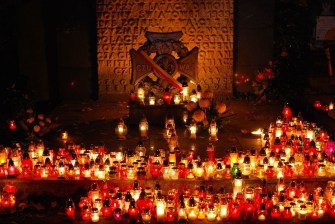 Halloween’s etymology and the lore of the jack-o-lantern

It was during the 18th century when the word “Halloween” came to be. Scottish poet Robert Burns helped to make the word more popular with his poem called ‘Halloween’. The word itself seems to be a portmanteau of the word ‘Hallow’, which originally meant ‘saint’, mixed with ‘een’ which was an abbreviation of the word “eve,” or night before.

Halloween is just another way of saying something like the night before All Saint’s Day or Hallowmas. Christians tended to celebrate the holidays and other traditions on the night before the major feast, for example Christmas Eve.

The many mixtures of traditions date back throughout the years. People used to make additional food offerings for their ancestors and the many spirits wandering about. Halloween’s history is a great mix of religion, folklore and eventually secular consumerism.

The apple bobbing most likely comes from Pomona, the Roman goddess of fruitful abundance. Jack-o’-lanterns derive from an old Irish folk figure; the legend was that one night a drunkard named Jack had come across the devil on a deserted and darkened road. He tricked and trapped the devil in a tree. After agreeing to let the devil down, he struck a deal with him that he could never take his soul.

When he died, he went to neither heaven nor hell. Instead he was forced to wander around in eternity. The devil flung up from hell an ember of coal to light his way, which Jack stuck in a hollowed-out gourd. Thus, the legend of the jack-o’-lantern was born. 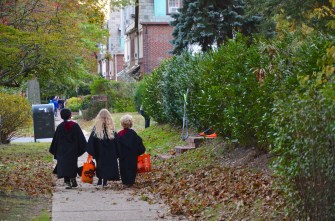 Where did trick or treating come from?

Our modern day iteration of trick-or-treating has a number of influences. Ancient Celts began the tradition of dressing up as animals and evil spirits in order to confound demons and other malevolent spirits.

Eventually, in medieval England, there was a group of people called “soulers” who’d go around on Halloween begging the rich for soul cakes. They were said to have prayed for people’s souls in exchange for their cakes or food.

All around Europe in the middle ages, there was a tradition of dressing up during major feast days and festivals. Eventually, the tradition of “souling” was brought to the United States in the 19th century. This would mix perfectly with the remnants of colonial Halloween festivities.

The peak time for the creation of what we now think of as Halloween came in the early half of the 1900s when there was an influx of millions of Irish immigrants. They helped to popularize the complete celebration of Halloween and eventually lead it to its national holiday status.

Borrowing from many of these ancient traditions, Americans would both dress up and go from house to house asking for food or money. This early trick-or-treating would eventually turn into the consumer bonanza we know today, with candy taking the place of the original “souling” practice. Eventually there was a general move in America to turn Halloween into a secular holiday and play down the ghastly and scarier aspects. The intention was to put the focus on get-togethers and parties.

Today, Halloween remains a mixture of many of these things. The spookiness still flows and the deep tradition is still there, hidden, if you know where to look.

Reading between the lines of Dorothy’s adventure to the Emerald City.
Up Next
The Present

The president told Axios on HBO that he hopes to change the law with an executive order.