When we think of artificial intelligence (AI), we think of advanced computational hardware running code that allows a processor to see patterns in raw information. A team of researchers from University of Wisconsin-Madison has just published a paper in Photonics Research that describes a very different type of AI system they’ve invented and demonstrated. “We’re using optics to condense [one might even say “replace”] the normal setup of cameras, sensors and deep neural networks into a single piece of thin glass,” says senior author Zongfu Yu. While the notion of embedding some kind of AI into a simple object like glass may be head-spinningly different, their proof-of-concept demonstration shows that their smart glass can identify numbers. Their invention may provide the foundation for future artificial vision. 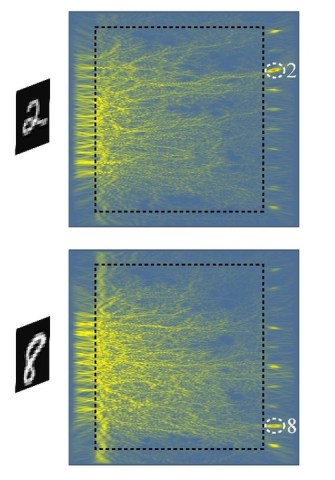 The system leverages the manner in which light bends, and the differences in the light reflected off of different shapes.

The scientists began by identifying the ways in which light aimed at specific shapes would bounce into and travel through their sheet of glass. (For their demonstration, they used numerical digits written on paper.) When light matches a particular shape’s profile, carefully placed air bubbles and light-absorbing materials such as graphene redirect it to, and thus light up, an identifier on the far side of the glass.

To put the results of their proof-of-concept demo another way: By matching a digit’s light to a known pattern, the glass intelligently identified the digit and directed it to the correct identifier. It was even smart enough to detect and correctly identify, in real time, a handwritten “3” being turned into an “8.” Paper co-author Erfan Khoram marvels, “The fact that we were able to get this complex behavior with such a simple structure was really something.”

That this identification occurs, after all, at the speed of light makes it a truly compelling advance. “The wave dynamics of light propagation provide a new way to perform analog artificial neural computing,” says Yu.

Could this be useful? Oh, yes.

One obvious application could be image-recognition glass on the face of phones. The hardware and software currently required for facial recognition is expensive to manufacture, and it eats up scarce battery power in use. “We could potentially use the glass as a biometric lock, tuned to recognize only one person’s face” according to Yu. Since the way their system works involves passive interaction with glass, he notes, “Once built, it would last forever without needing power or internet, meaning it could keep something safe for you even after thousands of years.”

Concludes Yu, “We’re always thinking about how we provide vision for machines in the future, and imagining application specific, mission-driven technologies. This changes almost everything about how we design machine vision.”

In the future, driving an app across a bridge could let engineers know how safe it is.
Up Next
The Present

“A monkey has been able to control a computer with its brain,” Musk said, referring to tests of the device.