The Global Journal of Addiction and Rehabilitation Medicine sounds like a solid, peer-reviewed academic publication. It’s not. It’s one of many “predatory” journals, alongside the Journal of Finance and Economics — as opposed to the legitimate and almost identically named Journal of Economics and Finance — and the GSTF Journal of Engineering Technology, a nefarious knockoff of the respected Journal of Engineering Technology published by the American Society for Engineering Education. What distinguishes the Global Journal of Addiction and Rehabilitation Medicine, however, is one of its editors, Dr. Olivia Doll. She’s a dog. A Staffordshire terrier from Perth, Australia. Her owner, Mike Daube submitted her “credentials” to the journal, about which Daube had doubts, and they, well, bit, appointing her to their editorial board. Six other journals did the same.

Daub was conducting an experiment to see if the journals were the fraudulent operations he suspect they were, ones that scarcely even looked at — much less peer-reviewed — research they were happy to publish for a fee. You’d think the “Dr.” Doll’s CV might’ve tipped them off, had they even bothered to look it over. Her research interests included ”the benefits of abdominal massage for medium-sized canines.“ She was described as  a senior lecturer at Subiaco College of Veterinary Science — which doesn’t exist — having formerly been an “associate” of the Shenton Park Institute for Canine Refuge Studies, a dog shelter that does. 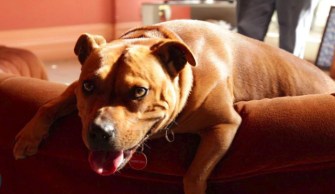 Predatory journals are a skeevy industry of entities posing as legitimate publishers of academic research, and a very good reason to verify the source of any new breakthrough you’ve read about. They’ve been around just about as long as there’s been an open-access movement in scholarly journals.

Prior to open-access, articles accepted for publication by journals were available only to the journals’ subscribers, typically libraries at universities. In these days of education cuts, that includes fewer and fewer institutions, and results in a wealth of research other scholars can’t access. To remedy this, legit journals now offer an open-access option by which a scholar whose work is selected for publication and passes through peer review can pay a fee to make it freely available online for other scholars. The fees run upward of about $1,000, and many academics therefore can’t afford open-access publication. Some government-funded research requires that reports are published open-access, with the fee built into a project’s grant proposal.

Predatory journals with legitimate-sounding names appeared as a scam offering open-access publication to scholars. After all, not every paper is accepted by a real journal and approved for publication. But the lack of true peer review (woof!) and any standard at all beyond a willingness to pay means that publishing in a predatory journal is pretty much worthless.

Except that it may actually work for some things. Hirings do occur based on publications in these journals, and promotions are granted. Economics professor Derek Pyne tells the New York Times, “I can say that such publications do not seem to hurt promotion prospects.” In an op-ed he wrote for the Ottawa Citizen, he noted that universities may even reimburse academics for publication fees, so your tax dollars may be paying for some of this nonsense. And articles in predatory journals gain unearned credibility by appearing in Google Scholarsearches, right alongside peer-reviewed papers.

This scam requires little investment from the publishers, since they typically publish online only, and there’s no actual review of the materials. Meanwhile, there’s big money to be made from a steady stream of academics desperate to get their work out into the world or inflate their credentials for professional reasons. Pyne wrote in his op-ed that there were 420,000 papers published in predatory journals in 2014 alone. Some predatory journals will even, for a fee, pretend their scholars’ research has been presented at make-believe conferences.

Daub’s prank was not the first time this kind of thing has happened. Last March, a group of researchers from University of Wrocław in Poland invented a fake academic named “Anna O. Szust,” oszust being the Polish word for “fraud,” and submitted her name and clearly loopy credentials as a reviewer for 360 journals listed in three well-known directories: Journal Citation Reports (JCR), Directory of Open Access Journals (DOAJ), and Beall’s list. The results were published in Nature: 8 DOAJ journals and 40 journals from Beall’s list accepted “Dr. Fraud” as a reviewer. 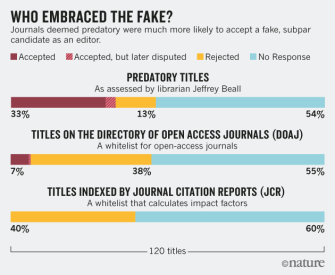 Though predatory publishers promote their services via spammy emails to academics and graduate students “inviting” them to publish in their journals (for a fee), the truth is that the scam is so well-known at this point that they may not really be fooling their marks so much these days. There are so many of these faux journals now that fees for them can be cheaper than those charged by legitimate journals, and of course, there’s no competition to publish based on the quality of the research or institutional pedigree. And, hey, an academic can’t not publish and thrive.

It could be argued that such a journal’s prey isn’t just the scholar — it’s also the rest of the world for whom the journal pastes a veneer of legitimacy onto research that may or may not deserve it.

Certainly these journals are lowering the quality of discourse in a era when the importance of actual facts is already under attack. University of Colorado librarian Jeffrey Beall, who after all coined the term “predatory journals,” has said of the whole thing, “This is polluting the scientific record with junk science, and demarcation has essentially failed. I believe this will worsen in time and the notion of what constitutes valid science and what isn’t will become increasingly vague.” He told the New Yorker recently, “The biggest victim is science itself.”

Related
13.8
What kind of intelligence is artificial intelligence?
The initial goal of AI was to create machines that think like humans. But that is not what happened at all.
The Present
What’s effective altruism? A philosopher explains
Some effective altruists “earn to give” — they make as much money as they can and then donate most of it to charities.
Sponsored
How to avoid family fights about money
No family is immune to money conflicts, no matter how much they love each other. Here’s what to look out for.
L&D strategy
Best practices for a needs analysis [Templates included]
Conducting a thorough needs analysis requires care, curiosity, and open-mindedness.
Neuropsych
Memory and the benefits of forgetting
Forgetfulness isn’t always a “glitch” in our memories; it can be a tool to help us make sense of the present and plan for the future.
Up Next
Hard Science
Massive New Study Shows How Dogs Boost Human Health
One type of dog in particular is linked with the lowest rates of cardiovascular disease in their human pals.