Many industries were left scrambling without clear direction by the election of Donald Trump, largely due to the lack of specificity in his platform. Clean energy companies, in particular, are feeling the uncertainty, as the proposals of candidate Trump did not bode well for them. It’s possible he may pull the U.S. out of the Paris climate change agreement, do away with many of the EPA’s environmental regulations, and, in general, favor the fossil fuel industry over renewals.

But Elon Musk’s Tesla Motors, one of the leaders of the clean energy revolution, may be in a solid position to survive what may come, due to a number of factors.

Tesla’s solar power business is achieving critical mass that is unlikely to be slowed. The company is about to become the largest rooftop solar installer in the U.S., waiting on the final approval in November of its $2.2 billion acquisition of SolarCity Corp.

Even under President Trump, the state-level requirements mandating credit from utility companies for excess power sent back to the grid should survive. The same goes for the 30% federal tax credit for installations of solar power, which has been supported by Republicans in the past.

Working in solar’s favor is also the fact that its prices have been dropping. As reported by Bloomberg, in most U.S. states it is now cheaper to generate electricity via solar power rather than coal (an industry favored by Trump, who vowed to revive it). And the costs are likely to keep going down, even if the government’s incentives and subsidies get taken away eventually (something that would have happened regardless of who is President). 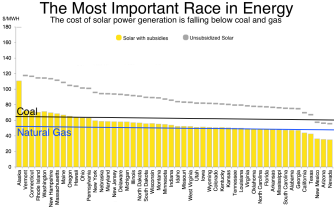 Another potential result of Trump’s policies could be the loosening of fuel emission rules, enacted by President Obama’s administration, which would increase the fuel efficiency of cars and trucks to nearly 55 miles per gallon by 2025. The possibility of this requirement being delayed sent auto manufacturers’ stock prices higher, as it’s likely to result in greater SUV and truck sales. Yes, America’s love affair with large, gas-guzzling vehicles is set to continue.

How would this affect Tesla and electric car makers? Much depends on how quickly they can make their technologies cheaper. Bloomberg analysis predicts 2020s to be the decade of electric vehicles as battery costs will be significantly lowered and their overall performance advantages over gas-powered cars should make them the most reasonable option for a growing majority of consumers, regardless of fuel efficiency standards. 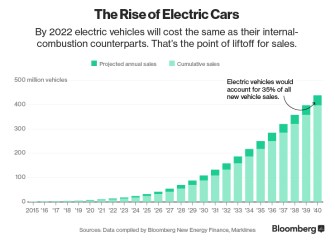 One more silver lining for those concerned about the future of the clean energy sector under Trump: most of the incentive programs are run by state, not federal, governments. And many states, including deeply Republican ones, see the benefits of clean energy and have incentivized its growth. Clean energy is likely an issue that crosses party lines.

Another potential issue for Tesla and similar companies could be the scrapping or re-negotiating of trade agreements, an issue central to Trump’s campaign. This will likely end up helping Tesla since it’s manufacturing and assembly is mostly in California and Nevada. Additional protections that would make it more expensive to do business overseas can only help a company that makes goods in the United States by making their products more competitive.

From time-traveling billiard balls to information-destroying black holes, the world’s got plenty of puzzles that are hard to wrap your head around.
Up Next
Technology & Innovation

MIT Scientists Got Spinach to Send them an Email

You wouldn’t know it, but plants are constantly taking in information.