Elon Musk came up with the idea for hyperloop pods that could whisk riders through sealed tubes at 700 mph as an ultra-fast, future-friendly form of travel. While not interested in building them himself, he issued a challenge for others to create a hyperloop that would, compared to current transit systems, be: 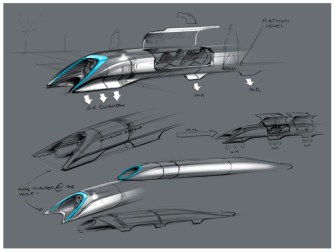 Musk’s hyperloop is based on an even earlier 1972 proposal from R. M. Salter of the Rand Corporation that envisioned an Very High Speed Transit System (VHST) based on magnetically levitated pods moving inside a low-pressure vacuum tube. The tube would ease pod movement with about “1/6 that of the pressure of the atmosphere on Mars” — the low pressure being maintained by vacuum pumps. A “hard” vacuum, according to Musk’s proposal is problematic: “All it takes is one leaky seal or a small crack somewhere in the hundreds of miles of tube and the whole system stops working.”

Hyperloop One, a company working to make the hyper loop system a working reality, has just announced a major achievement: The first full test of their hyperloop system in a private test taking place May 12, 2017 at DevLoop, the hyperloop test track they’ve built in the desert of Nevada. In the apparently nerve-wracking test, their prototype pod:

The team also tested all of the components throughout the system, including its motor, pod suspension, magnetic levitation, electromagnetic braking, and vacuum-pumping to ensure they function successfully as a single unit in a vacuum.

Obviously, there’s a way to go before attaining the hoped-for 700 mph speed, and hyperloop tubes will have to be constructed — Musk’s been promoting the digging of tunnels for various transit purposes, including hyperloop tubes — but it’s an exciting moment nonetheless. Hyperloop One’s Shervin Pishevar says in the company’s press release, “Hyperloop One has accomplished what no one has done before by successfully testing the first full scale Hyperloop system. By achieving full vacuum, we essentially invented our own sky in a tube, as if you’re flying at 200,000 feet in the air. For the first time in over 100 years, a new mode of transportation has been introduced. Hyperloop is real, and it’s here now.”

Alongside the announcement of the successful test, Hyperloop One also unveiled their new pod prototype, the XP-1, 28 feet long and made of structural aluminum. The company says the pod achieves autonomous high-speed propulsion in low pressure using a proprietary “linear electric” motor.

The XP-1 (HYPERLOOP ONE)

Related
Health
New blood types are often discovered following medical disasters
New blood types are regularly discovered by an unusual absence or an unusual presence — both of which can result in tragedy.
The neuroscience of loving music
Humans are musical animals four million years in the making, explained by music expert Michael Spitzer.
▸
8 min
—
with
Michael Spitzer
Life
Scientists use CRISPR to insert an alligator gene into a catfish
Disease kills off 40% of farmed catfish. This gene protects them.
Neuropsych
How you breathe affects your brain
Your breathing rhythm influences a wide range of behaviors, cognition, and emotion.
Health
What happens when regular porn watchers abstain for a week?
Researchers watched for signs of withdrawal — but didn’t find any.
Up Next
Diversity & Inclusion
How Diversity Training Programs Can Make Offices Better Places to Work
Every year, companies strive to acquire and retain top talent. The cost of recruiting a new employee compared to retaining a current one varies from one business to the next, […]