One of the key ideas behind the science of space mining is for space travelers to be able to use resources as they go, rather than bringing them along on the trip. It would take massive payload space onboard any rocket traveling the solar system—or elsewhere—to carry water along; it would take a lot less resources to gather it from below the surface of a planet or asteroid and use it as they go. Those raw materials can turn into fuel, drinkable water, and more.

Like any burgeoning industry, there’s always the chance it will turn to exploiting natural resources from planets, moons, asteroids, etc. and selling them for profit, but that’s not the goal here—at least, not yet. Also, there is a 1967 International Space Treaty that makes the area a little fuzzy.

Even though there are massive amounts of precious metals on and within some of the objects careening around our solar system, the primary focus of space mining currently is for the always-needed compound H2O—water.

Still, absent an effort by government organizations such as NASA in mining objects in space, private industry might be the only way this comes off—space treaty or no.

Along with those considerations comes the need for scientists and people who wish to explore this particular resource acquisition concept to learn how, what it entails, what objects might contain the things they’re looking for, and a whole lot more. 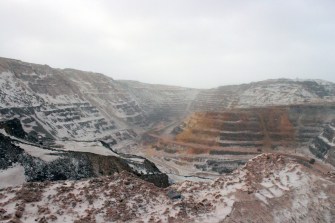 The Fermont site, at the ArcelorMittal mining complex seen on March 21, 2012 in Fermont, Quebec consists mostly of a gigantic crater, a lunar scenery criss-crossed daily by the most powerful and biggest trucks in the world which excavate the iron ore. (Photo credit Géraldine WOESSNER/AFP/GettyImages)

In fact, a graduate program in Space Resources now exists at the Colorado School of Mines’ Center for Space Resources. Colorado, rich in mining history and industry, makes a lot of sense for such a school.

The fall semester at Space.Mines.Edu begins in just four days, and it will offer MA and PhD degrees as well as 12-credit certificates for working professionals. There are even specialty tracks and elective courses in such fields as “Remote Sensing, Prospecting, and Resource Assessment,” “Robotics, Autonomy, and Communications,” and “Economics and Policy.”

As more private companies invest in technology to get people into space, and as NASA and other government-sponsored entities follow suit, those who understand what to do when we actually get there will be at a distinct advantage. Here’s Angel Abbud-Madrid on a little of what that might look like.

“The very first program dedicated specifically for space resources is being launched right here at the Colorado School of Mines! [It will] educate scientists, engineers and policy makers, offering three degrees: a certificate, a master’s and a Ph.D.”

Symbolic gestures often speak to our psyche in ways no rational action could ever speak to our intellect.
Up Next
Surprising Science

A new study discovers that engaging in back-and-forth conversations with a child builds stronger connections between two of their brains’ vital critical speech areas, regardless of socioeconomic status.