In what appears to be kind of the opposite of why someone would call an Uber to begin with (as opposed to, say, driving home drunk) Uber has filed a patent to develop technology that judges a user’s behavior to gauge whether they’re under the influence.

Ostensibly to reduce incidents of Uber riders attacking or even sexually harassing or abusing drivers, it’s the latest extension of A.I. into what appears to be a normal transaction: ordering a ride, getting said ride, and then arriving at your destination.

The system will store information about Uber users, matching their behavior in the past to how they’re being now. If a user appears to be drunk, then Uber will match that user with a driver who has more experience or training with such individuals. In some cases, it could even refuse to accept the user. 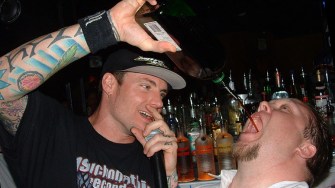 Moments like these are why people order Ubers. Vanilla Ice pours Jagermeister into a man’s mouth during an appearance at the Tex-Mex Grill in Baltimore, Maryland. (Wikimedia Commons)

From the patent application:

“A system coordinates services between users and providers. The system trains a computer model to predict a user state of a user using data about past services. The prediction is based on data associated with a request submitted by a user. Request data can include current data about the user’s behavior and information about the service that is independent of the particular user behavior or characteristics. The user behavior may be compared against the user’s prior behavior to determine differences in the user behavior for this request and normal behavior of prior requests. The system can alter the parameters of a service based on the prediction about the state of the user requesting the service.”

The proposed A.I. will use data points like the angle at which a user is holding their device as they order the service, accuracy of button clicks, typos, location, and even speed of walking. There’s even a flowchart to predict user behavior. 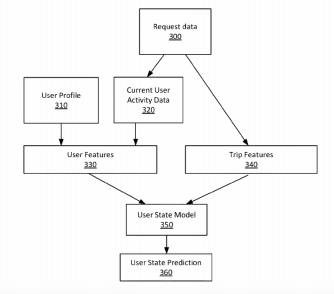 With the number of Uber drivers accused of sexual assault at now over 100—but no real data on the number of drivers assaulted by passengers—Uber has been increasingly focused on safety for both drivers and passengers.

Some astrobiologists believe life is rare, while others believe it is common in the Universe. How can we find out which view is correct?
Up Next
Starts With A Bang

What’s Happening At Kīlauea In Hawaii? 16 Questions With A Front-Line USGS Scientist

People watch as lava erupts from a Kilauea volcano fissure in Leilani Estates, on Hawaii’s Big Island, on May 24, 2018 in Pahoa, Hawaii. An estimated 40–60 cubic feet of […]