We tend to get ahead of ourselves. This phenomenon is ancient. Every time we invent or discover a new technology, we get so excited about its application we overlook potential consequences. Even as we regularly watch disasters unfold due to the unforeseen, we forget to remember to check in the next time a seemingly innovative tech is introduced.

We’ve long known that blue light from our phones, tablets, and monitors is not healthy. Many studies confirm how it negatively affects our circadian rhythms, leading to sleep issues that create other health problems. Now, a new study published in the journal, Nature, educates us on another harrowing effect of blue light: it’s causing the human eye to attack itself.

Degenerative eye disease is not a term you want your doctor to mention. As with the long-term effects of cigarettes and alcohol, eye problems are chronic, unfolding over decades. By the time we realize the inevitable, it’s often too late. Thus, we stay connected to our phones until late at night and early in the morning, never considering that we might spend our later years blind.

A team of researchers at the University of Toledo have figured out exactly why this is by studying macular degeneration. (A close friend has suffered from this since she was young; you can view what your vision looks like here.) 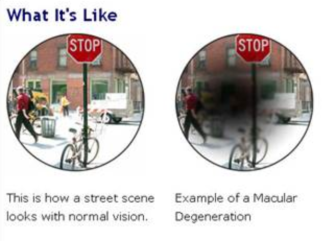 The disease occurs when cells behind light-sensitive tissue inside your eyeballs break down, resulting in a continual loss of eyesight. While blue wavelengths are suspected in aggravating this condition, the extent of their influence is debated, though this study offers solid proof.

Senior researcher and assistant professor Ajith Karunarathne and his team focused on retinal, a form of vitamin A, which is necessary for eyesight. “Photoreceptors are useless without retinal, which is produced in the eye,” he says. Ph.D. student researcher Kasun Ratnayake continues:

To prove his point, Karunarathne introduced retinal molecules to cancer and heart cells as well as neurons. In each instance, the combination of blue light and retinal killed these cells. He says:

No activity is sparked with green, yellow or red light. The retinal-generated toxicity by blue light is universal. It can kill any cell type.

Interestingly, the molecule alpha-tocopherol, a vitamin E derivative that works as an antioxidant in the human eye and body, stops cells from dying. When our immune system is suppressed, as often happens in aging bodies, we lose the ability to fight back against the effects of blue light and retinal. 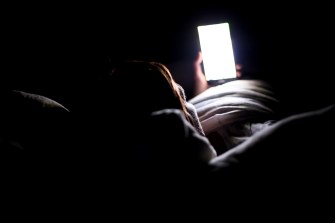 Karunarathne notes that blue light from our phones is tolerable, but not helpful. His lab is also studying the longitudinal effects of tablets, televisions, and computer monitors. Considering two million new cases of macular degeneration are detected in the United States every year, this is important research for an aging population.

There’s more manufactured blue light now than ever; young children are exposed to it on a regular basis. (Sorry, but distracting your child with an iPad has long-term health effects.) Thus, this research has important consequences for future generations. Karunarathne recommends eyewear that filters UV and blue light when outside and, perhaps most importantly, not staring at your phone or tablet in the dark. He concludes:

By learning more about the mechanisms of blindness in search of a method to intercept toxic reactions caused by the combination of retinal and blue light, we hope to find a way to protect the vision of children growing up in a high-tech world.

Engaging in a brief mindfulness exercise made people who identified “I/me” words 33% less likely to volunteer.
Up Next
Technology & Innovation