Replacing tobacco farms with solar panels to generate electricity would be a vast payoff for farmers and for human beings, according to researchers at Michigan Tech. The quick numbers? An increase of thousands of dollars to tens of thousands per acre, per year. That’s some kinda return.

And the potential savings in human lives? Over half a million. Of course, that includes the people who stop smoking.

In addition to the positives already listed, there’s another upside to the idea: one of the big problems with converting cropland to solar panels is that it takes away food production, increasing prices and availability of grains and other crops that can be made into food.

That makes this solution a win/win.

It’s actually a pretty dramatic return, too. The researchers studied tobacco farmland in North Carolina, which is a very popular state for such farms to exist. This is the conclusion their study reached:

If all of the tobacco farms in North Carolina were converted to solar farms there is a potential solar generating capacity of 30 GW, which is equivalent to the States peak summer load. This North Carolina acreage of tobacco farming land, which occupies more than 200,000 acres, is currently considered a threat to global health by the World Health Organization, the U.S. Department of Health and Human Services, the Centers for Disease Control and Prevention, the National Center for Chronic Disease Prevention and Health Promotion, Office on Smoking and Health. If converted the same land would become an environmental and health related global asset while generating more profit for the land owners.

The prohibitive factor right now is cost: estimates are approximately $1 per watt to convert these fields to solar, and these numbers were crunched before the recent tariff increase on solar panels enacted by the current administration in Washington. It would take some commitments to those in state and local governments, if not federal assistance, to help make these conversions happen. 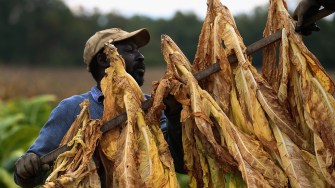 The savings in human lives are pretty significant, in addition to dollars in the pockets of farmers. Estimates are that 2000 or so lives would be saved by eliminating the pollution caused by coal-powered energy production and replacing it with solar, but the elimination of tobacco itself saves 480,000 lives of those who would cease smoking, as well as 42,000 additional lives lost to second-hand smoke.

Related
13.8
The weirdness of quantum mechanics forces scientists to confront philosophy
Though quantum mechanics is an incredibly successful theory, nobody knows what it means. Scientists now must confront its philosophical implications.
Neuropsych
Why is a Starbucks loyalty rewards program making customers so angry?
The rewards price to get a free cup of hot coffee at Starbucks is going up.
Empowering growth
7 essential management training topics for every team leader
From emotional intelligence to problem solving, these management training topics will set team leaders up for success.
Thinking
What if you could rewire your brain to conquer suffering? Buddhism says you can
For Buddhists, the “Four Noble Truths” offer a path to lasting happiness.
Hard Science
Solved: 500-year-old mystery about bubbles that puzzled Leonardo da Vinci
The solution involves the infamous Navier-Stokes equations, which are so difficult, there is a $1-million prize for solving them.
Up Next
Culture & Religion
Imaginary Histories, Possible Futures – Jacob Sager Weinstein (Children’s Author) – Think Again – a Big Think Podcast #134
Wild boars in the sewers of London. Augmented humans of the future. Jason’s high school friend, celebrated children’s author Jacob Sager Weinstein, on imaginary histories and possible futures.