2017 might (finally) be the year of the robot, if we go by the public attention that robotics and AI have been receiving lately from the media, consumers, and retailers. The biggest newsmaker at the 2017 Consumer Electronics Show was Amazon’s AI personal assistant, Alexa – and these robotic helpers are rapidly appearing on kitchen counters, nightstands and desks in homes across the country. Ford Motor Company has announced that it will make Alexa mobile by making it a feature in our cars. Amazon, Apple, Google, Microsoft and emerging competitors will make these robots a ubiquitous feature in our lives in the near future. From playing our favorite tunes to turning on the lights to ordering cat food, these robotic assistants are filling wants and creating new needs we did not know we had. Service robots now scurry across our homes, vacuuming floors and cleaning gutters. Soon robotic cars will be taking us far and wide. As a researcher interested in consumer behavior and technology use across the lifespan, I’m especially fascinated with the use of social bots that coo and purr to keep older adults company or mitigate certain chronic conditions.

Robots are evolving into something more than digital servants. They are becoming our companions. McKinsey recently fielded a consumer study through which many respondents reported that they thought of their tabletop bot as a “friend”. Something important is happening here – the birth of a new and influential adviser that has real power to affect our expectations and behavior. These digital friends are fast becoming an entirely new channel for business-to-consumer communications and sales. Businesses might one day find themselves primarily marketing through—and perhaps even toward—our robot companions.

As anyone involved in marketing knows, we’re more likely to buy products from those that we trust and from those that we believe understand us. According to Edelman research, we are more likely to trust those faces that we categorize as “people like me”. “People like me” understand me better than any expert, government official or company. “People like me” understand me because we share common experiences and values. Our robots don’t look anything like us, and they do not maintain any set of values of their own, but they do know us. AI and data analytics enable our robotic housemates to know our foods, music tastes, sleeping hours, commute patterns and more. By recording and acting in accordance to our preferences and behaviors, a robot does, in a sense, take on a set of values – our values. Our silicon companions may come to know us even better than our fleshy human friends do. 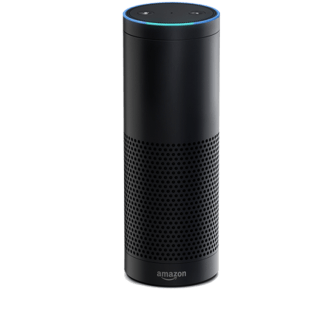 These robots are with us 24 hours a day, 7 days a week,  able to respond to our stated desires and in some cases even anticipate them. How long will it be until my Echo or any other device is connected to my smart refrigerator and alerts me that I am out of a staple food that’s critical to my wellbeing, say, double fudge brownie ice cream? How long until my home bot manages an entire home peppered with the Internet-of-Things and knows simply to order double fudge brownie ice cream for me without even having to ask first? How long until I am no longer surprised by this service but have come to expect it?

A debate rages over whether brick-and-mortar or online retail will ultimately claim the greater share of consumer hearts. While that debate continues, however, a new channel has emerged – the home robot. It takes far less effort to shop by robot than by any other means. Even online shopping requires the active decision to get on a device, and then to shop, price and often sort truth from fiction in user reviews. The desire to buy might persist throughout this process, but the passion to buy right now, that powerful, impulsive force, is bound to ebb.

On the other hand, nothing requires less effort than asking a trusted friend that is always near for a quick ‘favor’.. A home robot can advise and enable consumer action at the buyer’s highest point of awareness where need, emotional intensity and desire converge: the crucial moment in which we realize, “OMG – I’m out of fudge sauce!”

Your robot lives with you. Every day she gets to know you more intimately, or at least as intimately as a piece of silicon-fused plastic can. She’s able to respond immediately to every need or whim at the moment of its expression, whether your head is in the refrigerator, you’re feeding Fido, or you are opening the bills. We trust those who we believe understand us – and our robots have the power to understand our wants, needs, preferences, and habits. More than anything, perhaps, we trust predictability – and robots are nothing if not predictable. And robots are more than just little helpers; they are a new and powerful distribution channel between consumers and businesses.

The hyperloop would be a great idea for a completely flat planet. With topography and infrastructure, it’s a very different story.
Up Next
Culture & Religion

Are We Missing the Most Important Aspect of Health Care?

Physician Danielle Ofri argues that honest conversation is the most powerful mechanism for healing.